The house Hernan Cortes had built over the vanquished Aztec palace in the former capital of Tenochtitlan has been unearthed. Over the past twenty years, remodeling projects in the Nacional Monte de Piedad, a non-profit loan center and pawn shop building in Mexico City since 1755, have uncovered the foundations of the Palace of Moctezuma II’s father, Axayácatl. The palace, circa 1475, was one of the buildings that the soldiers of Spanish conquistador Hernán Cortés commandeered upon conquering Tenochtitlan in 1521.

More recently, archeologists Raúl Barrera Rodríguez, the head of the Urban Archeology Program (PAU) and José María García Guerrero, a collaborator, and their team have found fragments of the former residence of Axayácatl who reigned from 1486 to 1502, a place in which Cortés lived at the invitation of Moctezuma when the Spaniards originally arrived in the area.

The remains of the palace, a courtyard built from basalt stones, have been found about ten feet below the newer home built for Cortés after 1521. Also found were two statues, one of a glyph that symbolizes “market” and one of the feathered serpent god Quetzalcóatl. According to Smithsonian Magazine, the layers of history show how the future of Mexico came to belong to the Spaniards. 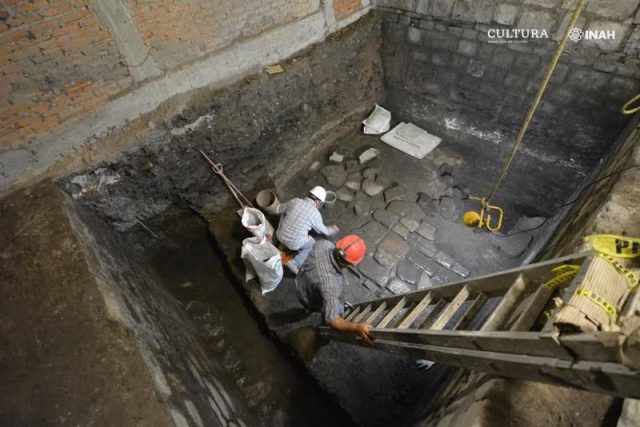 With an empire that was vastly enlarged by the previous ruler, his uncle Ahuitzotl, Moctezuma’s massive empire consisted of about five to six million people. Having already proved himself as a great military leader, he became a strict ruler causing some of his subjects to dislike his style of leadership which led to a conflict that he quickly put down using force. It is believed by historians that some of these dissenters joined forces with Cortés to remove the leader and quickly blamed the fall of the Aztec Empire on him.

The website for Instituto Nacional de Antropologia e Historia explains that when Cortés and his men were allowed to stay in Axayacatl’s palace, they immediately remodeled one of the rooms to serve as a place for Catholic mass; in the same room, they held the rulers that they had captured including Moctezuma, Cuitláhuac of Iztapalapa, Cacamatzin of Texcoco, and Itzcuauhtzin of Tlatelolco. 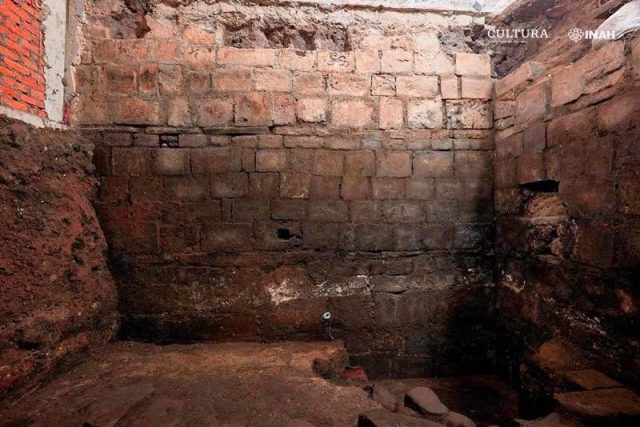 Hernán Cortés built his home on the remains of the Palace of Axayácatl, using materials from the demolished royal residence. (Raúl Barrera R. / PAU-INAH)

On May 22, 1520, during the festival of Tóxcatl, held to worship the god Huitzilopochtli, the Spaniards surrounded the Aztecs, herded them into one place, and proceeded to massacre them before returning to the palace. By June 30, the Spaniards had taken over Tlaxcala. Those who survived were used as slaves to tear down the palaces and temples where they had worshiped and build a new house for Cortés using the materials from the demolished buildings.

The House of Hernán de Cortes over the Aztec palace became the temporary headquarters of the first Cabildo of New Spain about 1525 and the new residence of the Marquessate of the Valley of Oaxaca, a Spanish nobleman who created the government of Mexico City in about 1529. Moctezuma had died under questionable circumstances during the original retreat of the Spaniards. In July 1520, the Aztecs were completely defeated in the battle of Otumba, and Cortés took control of Tenochtitlan, soon to be renamed Mexico City, by August of 1521.

The House of Hernán de Cortes built over the Aztec palace was retained by his family after he died in 1547 until his son, Martín Cortés Zúñiga, was expelled for being in a conspiracy to overthrow the government of New Spain. The deteriorating property was sold to the Sacro Monte de Piedad in 1836.

History often records Moctezuma and his people as thinking the Spanish conquistadors were gods but, according to aztec-history.com, it may not be true. The Aztecs were passionately religious, but they were not fools. Some believe that Moctezuma was just biding his time until the Aztecs could destroy the Spaniards, but this was never to be.

His brother, Cuitláhuac, succeeded him with his nephew, Cuauhtémoc, becoming the next ruler, but the Aztec Empire was already in ruins. Cuauhtémoc was captured by the Spaniards hoping they could learn the location of the Aztec riches, but ThoughtCo. reports that he steadfastly refused to answer, mocking his tormentors. When Cortés left for Honduras he took Cuauhtémoc with him to ensure he would not cause trouble for the Spanish government. On the voyage he had Cuauhtémoc, the last Aztec ruler, done away with.