The legendary Regis Philbin, TV host and all around entertainer, has died at the age of 88. It happened on Friday in Connecticut from natural causes. The news was announced by his family on Saturday.

Alongside Kathie Lee Gifford, Regis was probably most famous for hosting ‘Live with Regis and Kathie Lee’ between 1988 and 2000. Following her departure, Kelly Ripa became co-host before Philbin himself departed in 2011. And of course we were all were glued to our TVs testing our trivia mastery when he later hosted “Who Wants to be a Millionaire?”

Parents Francis and Filomena were New Yorkers of Irish and Italian heritage. Philbin was born in Manhattan, 1931. His decision to enter showbusiness as a singer didn’t go down well with them according to Regis. “They had put me through Notre Dame” he told Esquire in 2005. “It was a major, major disappointment in their lives. So I kind of reconsidered and finally wound up a talk guy.” 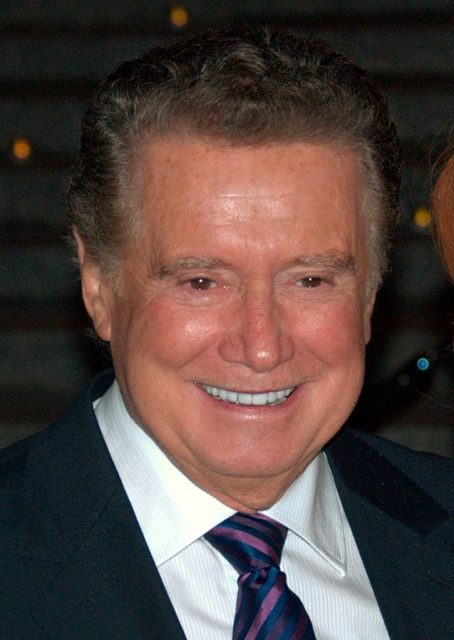 He was far more than just a talk guy. After hosting his own show in San Diego he was hired by Joey Bishop as a “sidekick” and came to national attention. It was glitzy but the end result of some hard graft. “When I was getting out of the service (he was a supply officer in the US Navy), this old marine major said to me, ‘What do you want to do with your life?’ And I said, ‘Well, I think I want to go into television, but I don’t know if I have the talent.’”

What his commander did stayed with him forever. “He took his two shoes that he was shining and he smashed them together and he said, ‘Don’t you know you can have anything you want in this life? You’ve just got to want it bad enough! Now, do you really want it?’ I said, ‘Yes, sir, I do.’”

With regards his famous breakfast hosting role, he took a more relaxed approach. I wake up ninety minutes before I go on the air” he told Esquire. “It’s not much time, is it?” 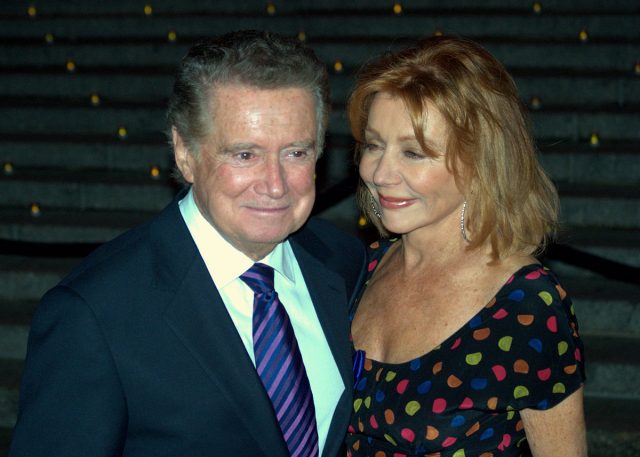 Despite being a small screen institution, he always stayed at the forefront of mainstream TV. When high stakes quiz ‘Who Wants To Be A Millionaire’ traveled to America from the UK, Philbin presented it. He also took the job as first host of ‘America’s Got Talent’.

His career spanned six decades. The recipient of the same number of Daytime Emmys, he also bagged Lifetime Achievement in 2011. He’s part of both the National Association of Broadcasters Hall of Fame and the Television Academy Hall of Fame.

Philbin fulfilled his dreams as a singer, releasing 4 studio albums. The first was in 1968 and the last in 2009. He didn’t just make records, he broke them too. CNN reports: “Philbin holds the world record for most hours on US television, according to Guinness World Records, with more than 16,700 hours on air.” 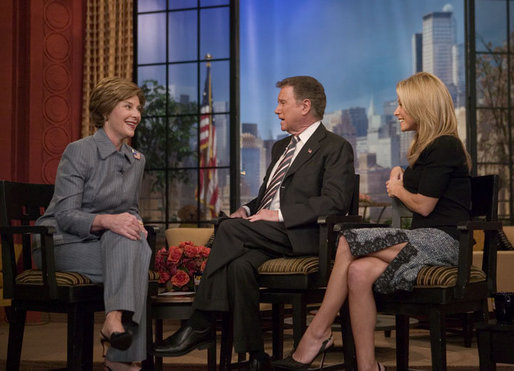 Laura Bush participates in an interview with Regis Philbin and Kelly Ripa during an appearance on the Live with Regis and Kelly show in New York, N.Y., Tuesday, Oct. 19, 2004. White House photo by Joyce Naltchayan

Philbin was a big sports fan, supporting the New York Yankees and Notre Dame Fighting Irish. “I love Notre Dame” he mentioned to Esquire. “I want my ashes scattered there.”

After being married to Catherine “Kay” Faylen from 1955 to 1968, he met second wife Joy Senese in 1970. They stayed together till his passing. Producer and screenwriter J.J. Philbin is their daughter. She has a sister, Joanna. Regis has a daughter, Amy, and son, Daniel, from his previous marriage.

CNN received a statement from the family. “His family and friends are forever grateful for the time we got to spend with him — for his warmth, his legendary sense of humor, and his singular ability to make every day into something worth talking about” they wrote.

Kathie Lee Gifford had actually been working Philbin since 1985, back when the program was called ‘The Morning Show’. “REGIS” she tweeted. “There will never be another.” In a joint tribute, Kelly Ripa and co-host Ryan Seacrest said, “We were beyond lucky to have him as a mentor in our careers and aspire every day to fill his shoes on the show.”

Critic Leonard Maltin shared the screen with Philbin early in his career. On Twitter he revealed the star “was always generous to me from his days on local L.A.television to his long reign on national morning TV. A lovely man indeed; He had a great run… Rest In Peace.”

Actor and ‘Seinfeld’ star Jason Alexander wrote, “I truly believed that #RegisPhilbin would be a presence with us forever.” (Philbin appeared on the show in an infamous sequence where Cosmo Kramer promotes his “coffee table book about coffee tables”.) Alexander adds: “He was a fun, funny, charming man. On the occasions I got to be with him, he was always a bright light, endlessly interesting and interested in everyone.”

“Bronx born and raised, Regis Philbin greeted us for years with our morning coffee and at night after dinner” writes NY Governor Andrew Cuomo. “His humor and enthusiasm touched millions of Americans.”

“He could do it all, and we loved him for it” Tweeted Larry King. “He was a fantastic person, and my friend” commented President Trump.