An item described as a “Mysterious vampire box”, in other words a vampire slaying kit, has been sold at auction for $3,186 (£2,500). Referred to as an “Antique vampire slaying kit” by Live Science, it had an estimate of between £2 – 3,000. Hansons Auctioneers of Derbyshire, England announced that the hammer had gone down on Tuesday.

The world was watching this supernatural treasure, made from wood with a brass trim and lined with silk… crimson-colored of course. “We have witnessed media coverage as far afield as Russia, America and China” said auctioneer Rik Alexander, quoted by Hansons website, “and we’re delighted the item has found a new home.”

As for the buyer, it could be a descendant of Bram Stoker’s famous slayer Van Helsing. Or it could be someone else altogether – an identity wasn’t disclosed. The box was originally offered to Hansons by a seller in the West Midlands who purchased it from an antiques fair. 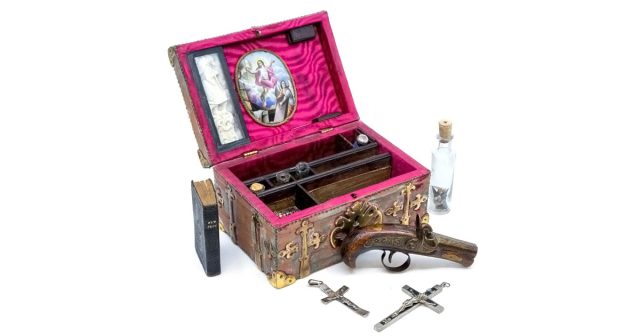 So how were creatures of the night dispatched back in the old days? Hansons lot mentions “an oval enamel painting depicting the resurrection of Christ” inside the lid, together with a “carved ivory wolf in robes carrying rosary beads”. Also included in the Count-threatening carry case are “three crucifixes”, “two sets of pliers” and “a bottle containing shark’s teeth”, amongst other eye-opening contents.

Despite featuring an 1842 copy of the New Testament, Alexander puts the box a little further forward in history. “Though our kit had an early Bible and the box is earlier, it appears to have been assembled around the Edwardian period in England” he states. “Many of its items are from this period. For example, its silver knife is dated 1906.” 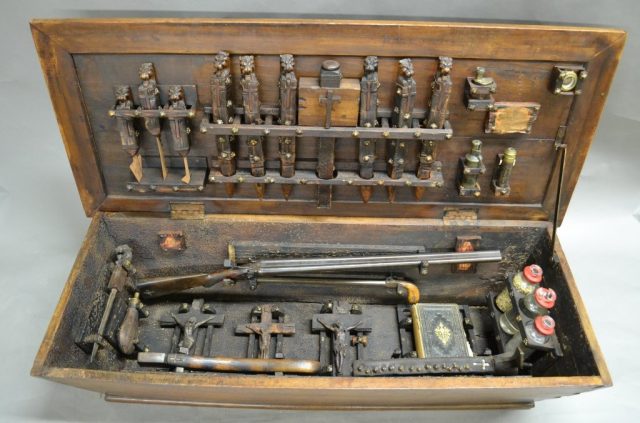 According to Hansons, “serious kits” had been sold from the early 19th century. The prospect of vampires was very real to some. Live Science notes that “burials dating to more than 1,000 years ago in Europe took safeguards to protect the living against the restless undead”.

What kind of safeguards? Weighting down the monster appeared to be key to keeping it in its coffin. The site writes that “suspected vampires” were “buried with stones in their mouths or pinned in place with rocks or iron bars.” Stoker’s classic tale of the immortal Dracula hit bookshelves in 1897, triggering another rush on slay boxes. 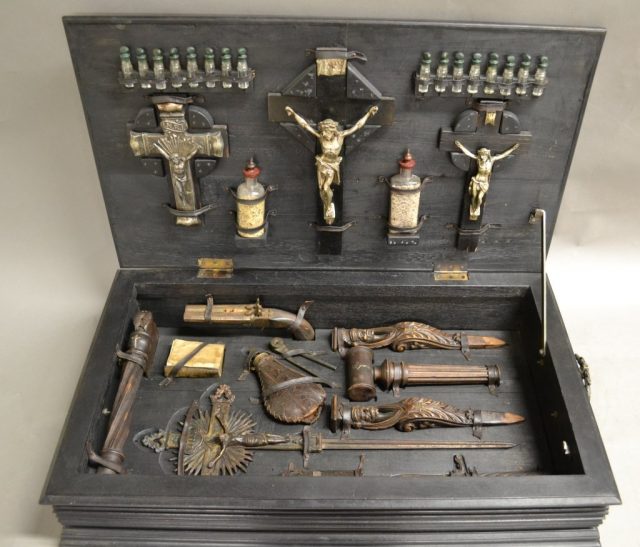 An early example of the vampire industry, this trade may well have drained wallets instead of veins. The iconic villains have gone from undead to ubiquitous, with enough books, movies and TV shows to weigh a body down forever. They reportedly entered the world consciousness in the late 17th century, borne on stories from Eastern Europe. Jure Grando Alilović, a Croatian villager who lived in the 16th/17th centuries, is believed to be the first person described as a vampire.

The legend continues on the big screen. Movie comedy ‘Renfield’ is in production, focusing on the Count’s insane assistant. Meanwhile a new modern day take on ‘Dracula’ is underway for prolific horror producers Blumhouse.

Vampires were typically detected by ignorance more than scientific rigor. Hansons don’t believe the kit will protect anyone from the unquiet dead. “Ultimately this box is a fun, aesthetic collection” says Alexander.

Hansons presented the box as part of a 4 day auction event. While easily the most attention-grabbing lot on sale, the firm received bids on all manner of intriguing items. Silverware enthusiasts were well catered for with a variety of vintage platters, jugs and spoons. No stakes appear to be available.

Those bitten by the auction bug rather than any passing vampires may have been tempted by a “Victorian silver plated spirit kettle” (part of a collection estimated at £70-100) or “A George V electroplate Old English Pattern 12 piece flatware service by Joseph Rodgers & Sons in fitted mahogany” (£150-250).