“Abandon all hope, you who enter here” are the final words of the message at the entrance to Hell in Dante’s Inferno. Dante Alighieri wrote his three-part narrative poem The Divine Comedy in the years between 1308 and 1321. The poem outlined the author’s journey from sin and darkness to divine light as he made his way first through hell, in Inferno, followed by traveling through Purgatory and, finally, Paradise. On his quest, he is guided by the poet Virgil, who moves him along his journey through hell toward purgatory

If heaven is any good Christian’s end goal, there is still a certain morbid fascination with the idea of hell, if for no other reason than to motivate oneself to avoid it. Dante’s description of hell was both horrible and oddly specific, with detailed descriptions of different layers or circles that were reserved for the perpetrators of particular types of sin. 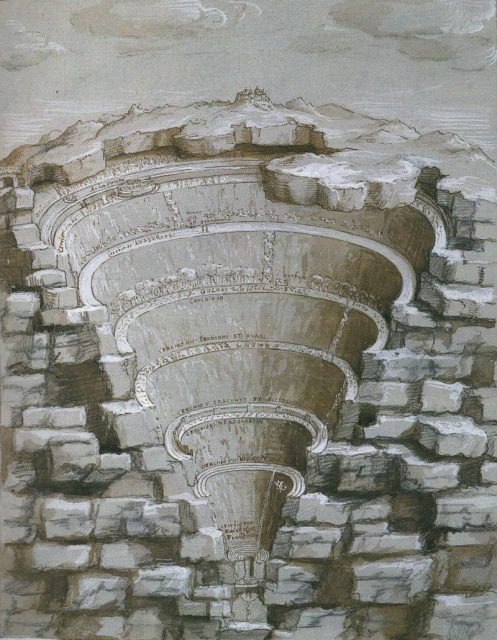 Dante depicts hell as a series of ‘circles.’ The first circle is Limbo, which is populated by those who have good souls but are unbaptized, such as babies or ‘noble’ pagans. The second circle is devoted to those whose primary sin was lust, and the region is characterized by powerful winds. The other circles, in order, are for the gluttonous, the greedy, those ruled by anger/wrath, heretics, those who cling to violence, those who commit fraud, and finally, in the ninth and deepest circle, those whose primary sin is treachery/betrayal. The three last circles are subdivided further, based on type and severity of sin; a more detailed explanation can be found at History Lists. 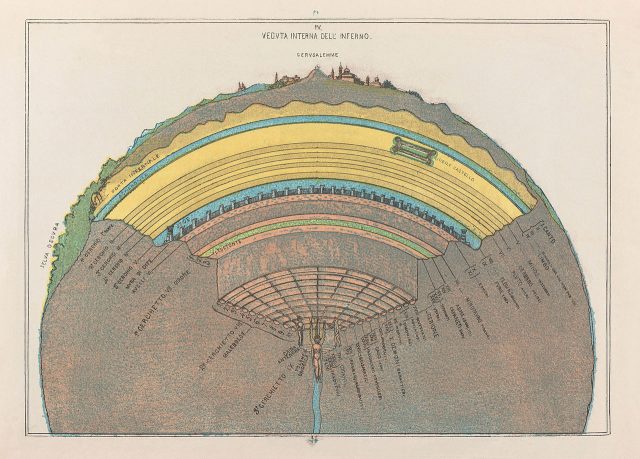 That very specificity has led a number of people over the centuries to use his narrative of the inferno as a template for creating ‘maps’ of hell.
Antonio Manetti was a fifteenth-century mathematician and architect, as well as being a native of Florence, Italy, as Dante was, himself. Manetti was the first person known to have used the narrative to calculate and measure the probable dimensions of Dante’s hell and begin to put together maps which were, perhaps, less illustrative and more like schematics than later renderings. 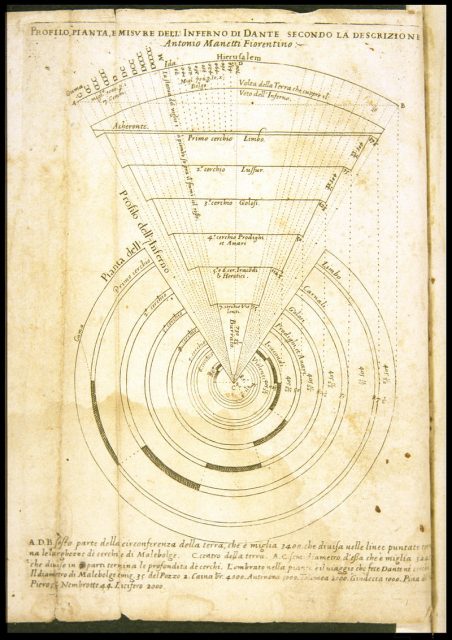 The Renaissance painter Sandro Botticelli also created a map of hell. According to the World of Dante, it was painted between 1480 and 1495. Botticelli’s rendering shows a more-or-less cone-shaped configuration, with each successive circle shrinking as you approach the ninth circle and Satan. 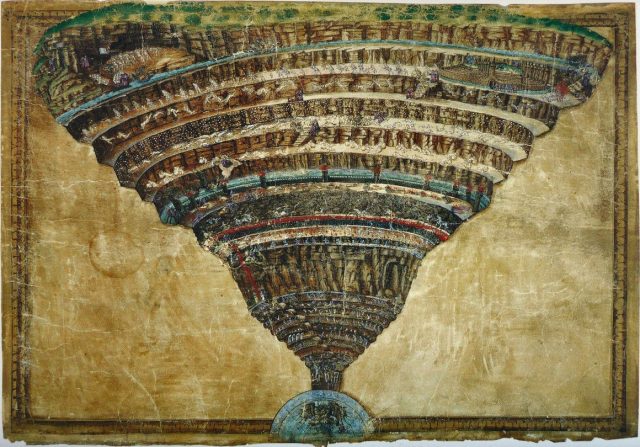 Each of his circles has tiny renderings of humans undergoing the punishment he believed fit the sinners for that level.
Another Renaissance-era painter, Jacques Callot, created a rendering of the landscape of hell in 1612. While his painting indicated the circular nature of hell, his rendering primarily focused on the tormented souls who inhabited the inferno. 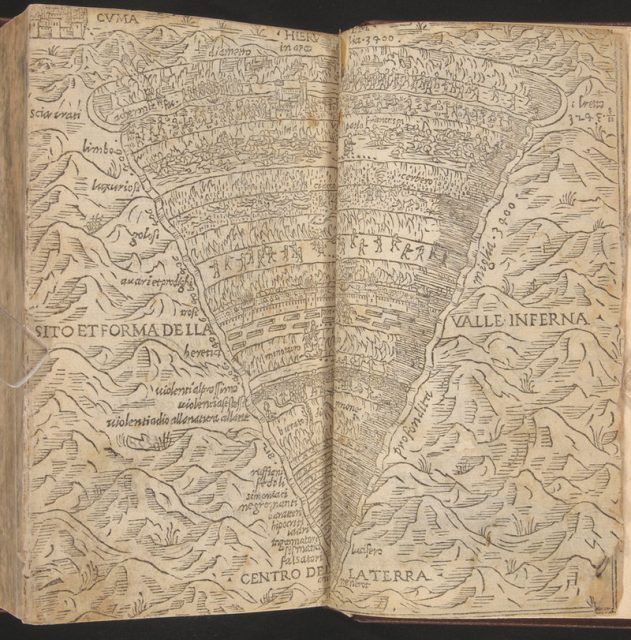 A Hell map from an edition of Divine Comedy printed in the late 15th century by Aldus Manutius, a Venetian publisher. CORNELL UNIVERSITY LIBRARY

The Renaissance period was time when science, art, and religion were all very important cultural elements, so it is no surprise that all three elements combined to make the landscape of hell a popular theme. The problem, of course, lies in the fact that there is no clear scientific evidence to base those numbers on, and scholars have hotly debated the ‘truth.’ Galileo even did his own investigation, ultimately concluding he agreed with Manetti’s numbers. 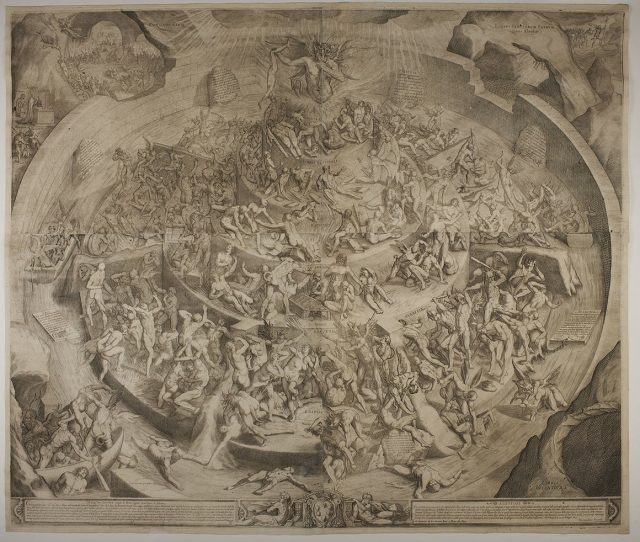 As the Renaissance waned, so did interest in creating maps, although it briefly saw an upswing in the 18th century. Even in the present day, there are still the occasional artists who revisit the theme. Lindsay McCulloch created a rending of Dante’s hell as recently as 20 years ago, that has a very similar look and feel to Botticelli’s depiction.

Why has the Divine Comedy, particularly Dante’s Inferno, had such a long-lasting impression? First of all, because the story reflected so many things about life, politics, and humanity that consistently resonate with people. Secondly, humans have probably been fascinated by questions about what happens when we die as long as our species has had the ability for abstract thought.

Finally, the Inferno and its maps are compelling the way that watching a train wreck is compelling. It offers us both the opportunity to witness the terrible consequences of others’ actions and misfortunes while also giving us the hope that we can avoid those pitfalls ourselves.