The earliest known north American settlement has been located. Paisley Five Mile Point Caves in southern Oregon near the Fremont-Winema National Forest has officially been added to the list of the most important archaeological sites in the United States by the U.S. Park Services under the authority of the National Historic Preservation Act of 1966. The caves have been a popular archaeological site since 1938, but with the advances in carbon dating and other tools, the site offers up new discoveries even today.

According to The Oregon Encyclopedia, archaeologist Dr. Luther Cressman, often referred to as the father of Oregon archaeology and anthropology, began the work at Paisley Caves in the late 1930s and continued until the 1960s. He helped to establish the anthropology department at the University of Oregon and was the first director of what would become the Oregon State Museum of Anthropology. Before Cressman’s groundbreaking work, scientists believed the earliest inhabitants of North America were the Clovis People whose distinguishing spearheads record their places of residence.

National Geographic states that it was first believed that the ancient inhabitants of North America migrated en masse from Asia about thirteen thousand years ago, but according to Michael Waters, director of the Center for the Study of the First Americans at Texas A&M University, evidence of human occupation before the Clovis culture has been found at numerous sites. 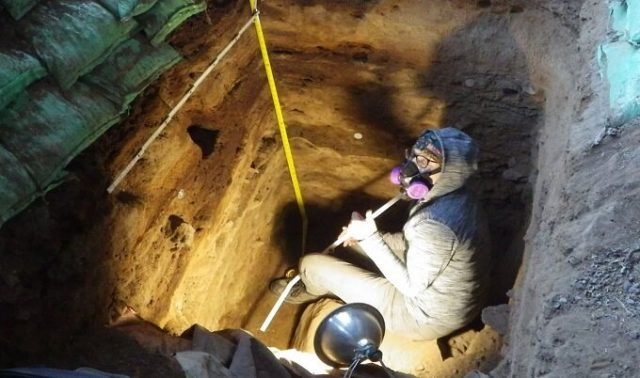 In 2002, Dr. Dennis L. Jenkins, archaeologist and Field School Supervisor for the Oregon State Museum of Anthropology at the University of Oregon, and his students began to reassess the caves explored by Cressman, and, in 2008, reported that human DNA in coprolites (feces) dated between 14,000 and 15,000 years ago had been found leading them to believe humans had been in the Americas at least one thousand years before the Clovis people and that the first human population originated in northeast Asia rather than Africa. 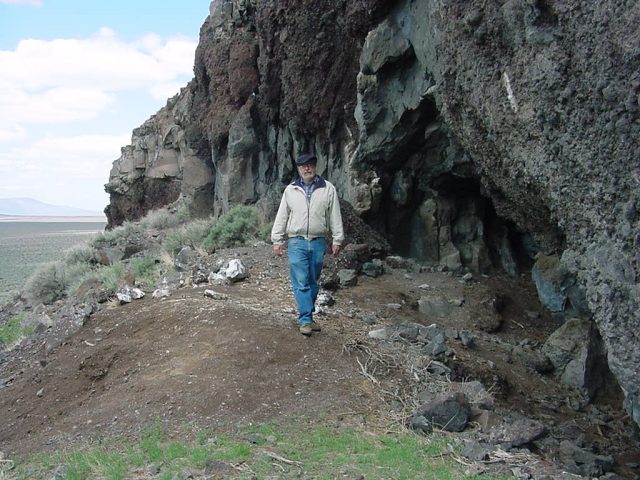 Paisley Caves, now believed to be the earliest known north american settlement. In these caves some of the oldest human remains in North America were found. Bill Cannon, archaeologist of the BLM Lakeview, district in the center.

The team tested soil, gravel, and sand separately as well as obsidian and bone tool fragments, sage cordage and grass threads, cut animal bones, wooden pegs, and debris left over from fire pits along with Pleistocene animal bones. The desiccated human feces were considered the most important finds and were sent to Dr. Eske Willerslev, Director of the University of Copenhagen’s Center of Excellence GeoGenetics. 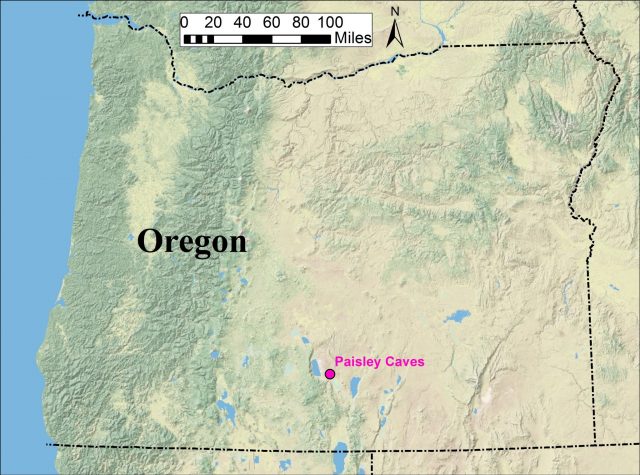 He determined that the samples contained human mitochondrial DNA that was the same as the peoples already known to have first migrated from Asia to the Americas and multiple radiocarbon dates that calibrated to over fourteen thousand years ago, predating the earliest Clovis sites by over a thousand years.

Of course, there were some who questioned the validity of the discoveries because of previous work done by Cressman and others noting that the deposits were not found in situ (their original place) and may have been cross-contaminated. Additional work completed in 2009 revealed a serrated bone tool that also pre-dated the Clovis population and the study of the coprolites was reaffirmed.

Quoted on Phys.Org, when both human and canine DNA were found in one sample, Dr. Lisa-Marie Shillito, Senior Lecturer at Newcastle University explained the importance of the coprolites. She notes that we know our dogs eat feces. Since they were also doing the same at Paisley, it appears that the people had domesticated dogs. She believes that, during this time of rapid environmental change, much more can be learned about how early peoples lived and how they interacted with and adapted to their unpredictable world.

Oregon Live describes the Paisley Caves now as sagebrush steppe land; however, once it was a moist grassy plain with animals such as bison and camels. Archaeologists, anthropologists, and interested amateurs are pleased to have Dr. Cressman’s early findings confirmed. Knowing that humans inhabited this area from the late Pleistocene age opens up new fields of inquiry into our own history and the evolution of culture.