The monumental Greek ruins of the fountain at Apollonia in southern Albania has been attacked by vandals. Lasting damage has been inflicted on the site, or nymphaeum, with stone columns broken beyond repair. This is believed to have happened in April and only been reported recently.

“Nymphaeum” essentially means a nymph shrine. Ancient Origins explains it as “originally a series of natural grottoes consecrated to the mythological nymphs of springs.” Stumbled upon in 1962 during a military tunnel dig, it took no less than seven archaeological “campaigns” to excavate.

Thought to date back to the 3rd century BC, it’s located at Northern Epirus near the city of Fieri in an archaeological park. Referring to Prof Neritan Ceka, who worked on the nymphaeum, Albanian Daily News describes it as “the only artifact of its kind in the Mediterranean ancient world.” The Greek community’s reaction in Northern Espirus has been one of outrage. 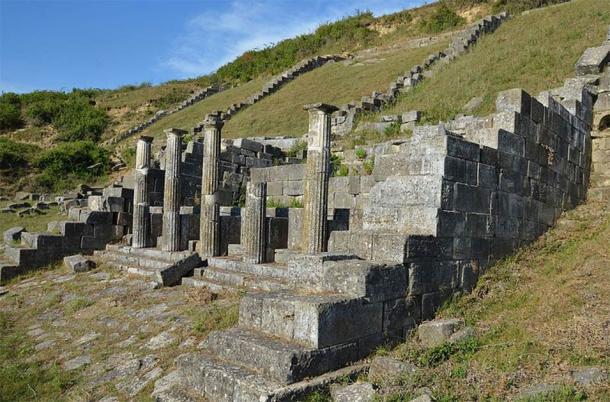 The nymphaeum, or monumental fountain, at the ancient Greek city of Apollonia in Albania. (Photo by: Carole Raddato/ CC BY-SA 2.0 )

Lockdown has kept people at home and left history unguarded. Aside from releasing a statement expressing dismay, the park’s director reported the terrible incident to authorities. The Greek City Times writes that “Approval has been made by the Albanian Ministry of Culture to try and restore the Ancient Greek monument.”

Damage done to the ruins by vandals. Photo from Greek City Times.

Whether the nymphaeum is actually Greek or not is up for debate in Albania. The destructive act has highlighted tensions between the country and its Greek minority population. Ongoing arguments over where their heritage comes from may have led to the vandalism, according to some. The Greek City Times notes, “historical revisionism is strong in Albania as Albanians attempt to link themselves to the ancient Illyrians with quasi-theories that are mostly rejected by the academic and historical world.” 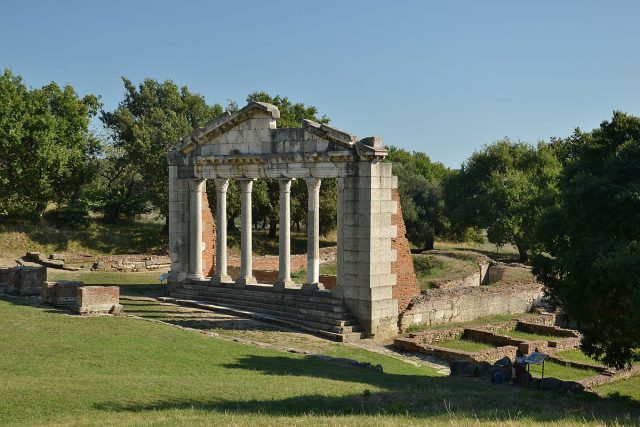 The ruins of Apollonia. Photo by Pudelek

Meanwhile the Albanian Daily News brings up the Forum for the Protection of Cultural Heritage. They have their own view on the situation and “accused the director of the park of Apollonia for keeping the event in secret and not following the standard procedure of protection.”

Apollonia is a UNESCO World Heritage site. They state the city was founded in the 7th century BC by colonists from Corfu and Corinth. It was part of “Illyrian Taulantii” (home to the Taulantians). A collection of towns, Apollonia “achieved its zenith in the 4th – 3rd centuries BC.” Covering 137 hectares, it had around 60,000 people living within a 4 km long wall. UNSECO says “Apollonia today still boasts a magical atmosphere that was highly sought after by Roman aristocrats.”

Rocked by earthquakes in the 3rd – 4th centuries AD, it “went into a rapid decline, losing all its grandeur from the past.” The thriving port became a no go area. Ancient Origins writes “its harbor became plugged with silt”. Invasions by Goths took an additional toll on a seat of influence which for a long time “flourished due to its rich agricultural hinterland and its role in the slave trade”.

The sloped nymphaeum had an underground water supply and spread across 1,500 sq m approx. “On its highest part,” UNSECO writes, “a wall blocked the source water and sent it towards five escalating canal nozzles, 11 meters apart from each other. Through these nozzles the water was sent to the deposit.”

UNESCO call it “the biggest and the best preserved monument in Apollonia”, tragic given current circumstances! Though the site has certainly seen its fair share of calamity over the years. The nymphaeum was supposedly in operation for around a century before being wrecked by a landslide.

Aside from the fountain, Apollonia park features such sights as the Acropolis, plus a limestone Obelisk that symbolizes city namesake and deity Apollo. There are the impressive ruins of “Athena’s House” and less godly attractions like a Theater and Gymnasium.

The modern day vandals might not be found, but their upsetting actions have thrown fresh light on a controversial corner of history. Whatever their motives, it’s a stark reminder that the past can impact on the future.