More clues about a famous shipwreck in Israel have been uncovered. In 2005 an unusually well preserved 7th century AD ship, the Kibbutz Maʻagan Mikhael B, was found about three hundred feet off the coast of Israel by recreational divers. The unusual aspect of this ship is that it carried artifacts which were both identified as Christian and Muslim by their designs. It also carried amphorae types that have never been seen before.

The ship lies about three feet under the water and another three feet under the sand. After the initial discovery the ship was not immediately surveyed and was buried under the sand for another ten years. A team from the Leon Recanati Institute for Maritime Studies and Drs. Ole Grøn and Lars Boldreel from the University of Copenhagen in Denmark conducted a sub-bottom profiler and water-jetting survey that successfully led to the rediscovery of the ship according to a paper by Grøn and Boldreel at researchgate.net. This ship is not to be mistaken for another shipwreck dated to about 400 BC, the Ma‘agan Mikhael found in 1985 about one hundred and sixty yards to the north and has since been raised. 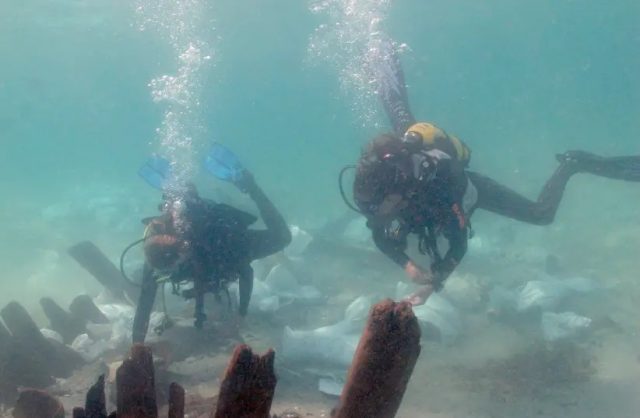 Students Maayan Cohen and Michelle Creisher examine the pottery near the shipwreck in Israel. (photo credit: A. YURMAN/LEON RECANATI INSTITUTE FOR MARITIME STUDIES OF THE UNIVERSITY OF HAIFA.)

The Kibbutz Maʻagan Mikhael B underwater excavation seasons in May and December 2016 and September 2017 by the Leon Recanati Institute for Maritime Studies of the University of Haifa produced the remains of a just over sixty four foot long ship filled with glassware, coins, bricks, stones, ceramics, the remains of food, rope and animal bones. No human bones were found and it is assumed that because the ship was so close to land that the crew simply swam to the shore.

The construction of the ship was mostly made up of black walnut, Aleppo pine and Ilex wood joined together with iron nails which replaced copper nails by about the 3rd to 5th centuries AD. Most of the trees grow in the Levant and Turkey area. The foodstuffs found were from a diet common to the Mediterranean: preserved olive pits, walnuts, grape seeds, peach stones, carob pods and pine cone seeds from the umbrella pine. Of the glass and coins, the long neck of an aqua colored glass bottle with a round rim similar to a vase and seven copper‐lead alloy coins were discovered in the northwestern section of the wreck. 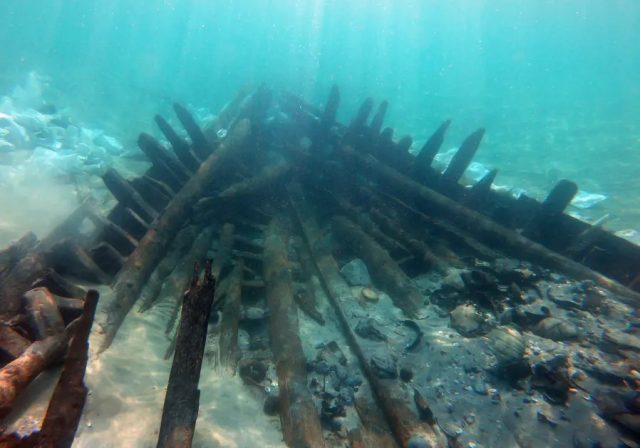 The shipwreck contains the largest maritime cargo collection of Byzantine and early Islamic pottery ever discovered in Israel. (photo credit: A. YURMAN/LEON RECANATI INSTITUTE FOR MARITIME STUDIES OF THE UNIVERSITY OF HAIFA.)

Most were too corroded to be identified but four were found to display a portrait of Constantine according to a paper written by Maayan Cohen and Deborah Cvikel at onlinelibrary.wiley.com. Also found was woven matting used to cushion the amphorae and a leather sack made from goat skin. The animal bones were goat, pigeon, chicken, fish and sea turtle. It is believed that the large rocks were used for ballast and the smaller ones may have been fishing sinkers or weights used when making rope while the bricks may have been part of a cook stove.

Of the possibly hundreds of amphorae, large clay jars used to transport wine, fish sauce and other edibles, thirty eight were found intact and six were brought up to be examined where it was found that several had Greek, Arabic, and Christian symbols stamped or carved onto the amphorae.

According to Cvikel at jpost.com, “We do not know whether the crew was Christian or Muslim, but we found traces of both religions.” Some still had stoppers made of leather, ceramic and stone. It was common for the makers of amphorae to sign their jugs with a personal stamp. A cooking pot lid, bowls made of Cypriot Red slip (liquid clay) and several shards of ceramics were also retrieved to be preserved and studied. Because the different foods carried were all harvested in the autumn, Cvikel believes that was the time of year the ship sailed.

Parts of the ship, including the rear area where the Captain’s quarters were located have yet to be uncovered and because of the current health crisis, it has not been determined when the archeology teams can return but Cvikel remarked, “We…need to carry out more analysis on many of the findings, including the amphorae, their content, the everyday objects, such as the cookware, and the animal bones.”