Archaeologists Believe they have Found the World’s Oldest Human Bed

Ancient bedding discovered from around 200,000 years ago has experts convinced they have located the world’s oldest bed. Border Cave is a rather uninviting spot far up in the Lebombo Mountains in South Africa, not the kind of place modern day campers would want to spend a few nights, even if their goal was getting as far away from modern life as possible.

It is located right on a sheer rock cliff, sliced out of a densely forested hill, as if Mother Nature took a knife and gashed the mountain in its side. Archaeologists must climb a long way up to access Border Cave, and then they must crawl into it to see what’s hiding in such a difficult and unwelcoming environment.

But once they do access it, the cave rewards researchers with plenty of evidence of the humans who once lived in the area many thousands of years ago. And what one team of archaeologists may have recently found is evidence of perhaps the first camp bedding ever improvised by man in Africa, material they estimate may be about 200,000 years old. 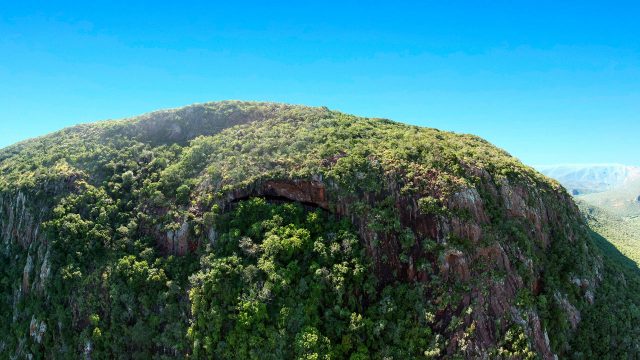 Lyn Wadley, an archaeologist with the University of Witwatersrand, found what she believes is a crude kind of bedding material, discovered while she and her colleagues were excavating the cave for other artifacts. She found tiny, white marks in the earth, and she believes they are a kind of straw grass brought into the cave by people using it to take shelter, and the plant materials were piled in for sleeping. 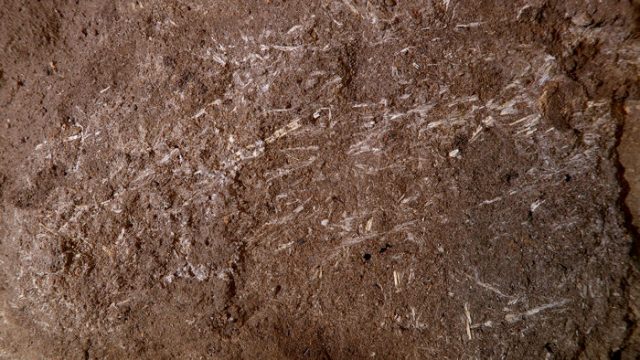 Wadley took some samples out into the light and examined them under a microscope, and it was then that she made the supposition that the straw, which was combined with ash, were carried into the cave to make it more comfortable. She acknowledges that she is taking a leap by assuming the plant materials were deliberately carried in to make crude but more comfortable camp beds. 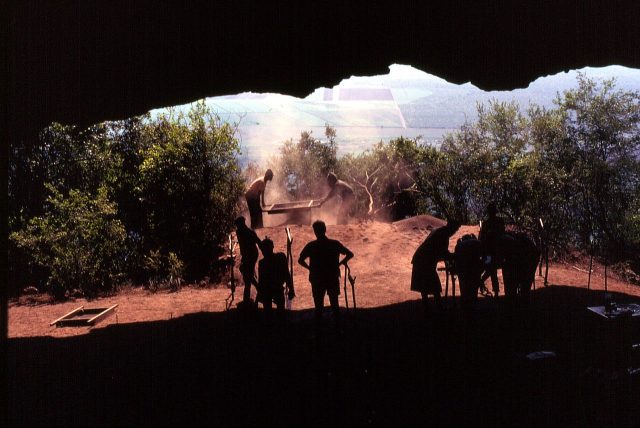 View from inside Border Cave, site of the world’s oldest bed.

“The bedding doesn’t really tell us anything about the complex cognition of humans,” Wadley admits, but she nonetheless believes it is evidence of an intentional attempt by early man to make a sleeping area more hospitable. Two teeth were also found, one slightly larger than the other, one of which is about 200,000 years old, while the other tooth is about 90,000 years old.

If this seems like somewhat slim evidence on which to make a case that Border Cave was the site of man’s first “camping” trip, others agree, including some experts. Dani Nadel, an archaeologist with Haifa University who was not on the research expedition, thinks the discovery of the two teeth, and the grasses, is not really enough proof that man slept in the cave on camping material. His scepticism rests with the problem of dating the teeth exactly; no one can know, for certain, exactly what year they are from.

Another colleague, Dan Cabanes, of Rutgers University in New Brunswick, Canada, agrees. It’s “very difficult to prove this,” he said.
However, Wadley has published her findings in a report in the online science journal Nature, in the August 14th edition. It is available for reading here.

She doesn’t insist, in the report, that the dates of her findings are definitely correct; she instead proposes that what she and her team found is evidence of possible camping, the earliest in Africa.

And while all her fellow archaeologists and scientists in other disciplines may not agree with her theory, the report will no doubt serve to spark discussion and further research. And that is one of archaeology’s most important functions – to teach us about our ancestors, get us thinking about who and where we were in earlier times, and inspire us to learn.