The “Targa Florio” from Sicily is the planet’s first sports car race being founded in 1906. A touchstone for petrolheads, it’s also world famous for its dangerous combination of high octane thrills and stunning rustic locations. While the event no longer takes place the way it used to, it still holds a place in the hearts of Sicilians. 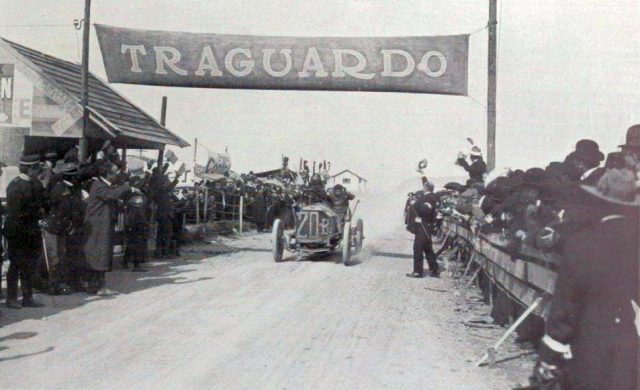 For most of the 20th century (1906 – 77), classic gas guzzlers burned rubber through the island’s Madonie mountain range. The 150 km mile route (revised to 72 km in later years) contained hundreds of tight corners, and featured little in the way of protection for enthusiastic onlookers. Hay bales are mentioned as makeshift guard rails, together with “stone walls and other forms of sturdy private property.” 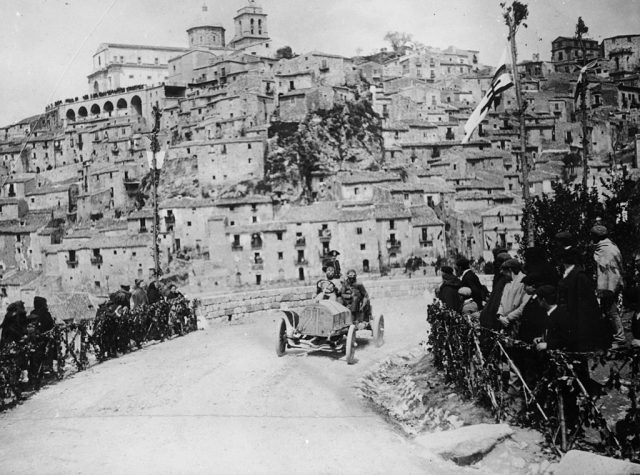 Maurice Fabry in an Itala, in the Targa Florio, the first sports car race, Sicily, 1907. The town of Petralia Sottana in the background. (Photo by National Motor Museum/Heritage Images/Getty Images)

What was up for grabs? Ferrari Magazine writes, “The prize was initially set at 50,000 lire, as well as an art nouveau-style number plate designed by René Lalique.” 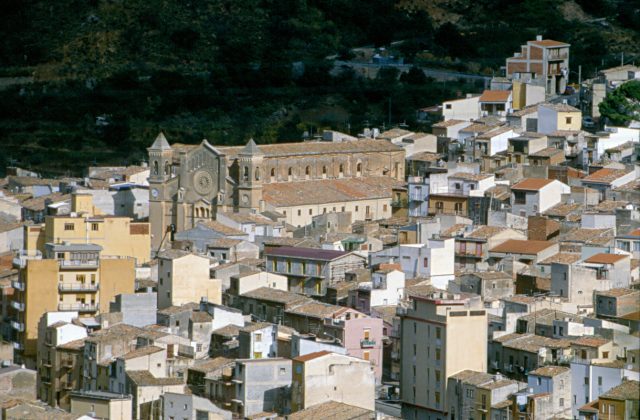 The town of Collesano, which was on the Targa Florio circuit since its inception in 1906. Photo by Carlo Columba

The island’s villages took a national holiday of sorts, in order to relax and watch the roadsters zoom by. The Targa Florio covered one lap, and sixty needed to be completed before drivers got their heads around the terrain. When practising off the clock, potential drivers had to swerve to avoid unfortunate obstacles such as children, adults and farm animals. 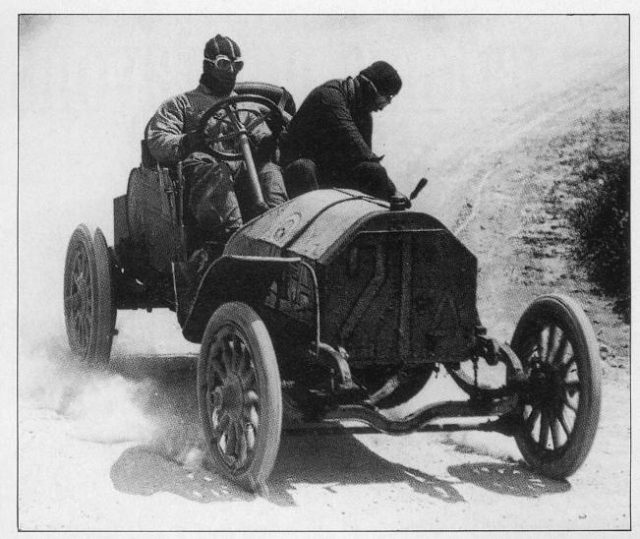 That said, the race became part of the island’s fabric. Locals were generally happy to see the cars, and the competitors were happy to see them and their beautiful country. Ferrari quotes timekeeper Gilbert Morley who said to British radio, “it’s like racing inside the most beautiful work of art.” 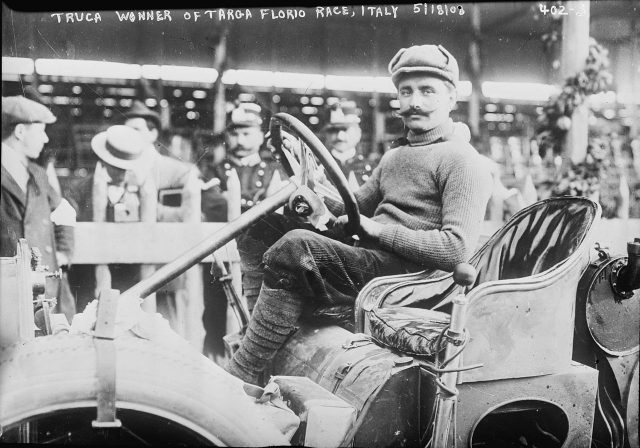 Website Messy Nessy Chic refers to that unique combination of petrol fumes and local flavor: “It was the kind of race where if a car broke down, the driver would have been invited inside by locals for spaghetti.” 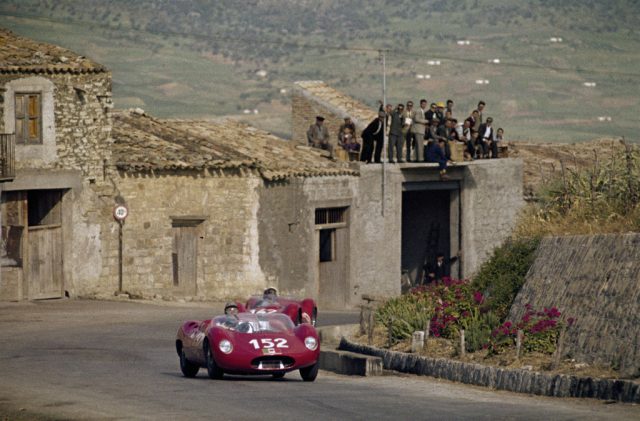 Two Maseratis at the Targa Florio in 1961. (Photo by Klemantaski Collection/Getty Images)

The first winner of the Targa Florio was Alessandro Cagno. Though his victory showed ominous signs of things to come. Ferrari writes he was “the most adept at navigating the tangle of small roads and trails”. Yet he was also “the luckiest, having succeeded in narrowly avoiding a donkey that had strayed out on to the circuit.” 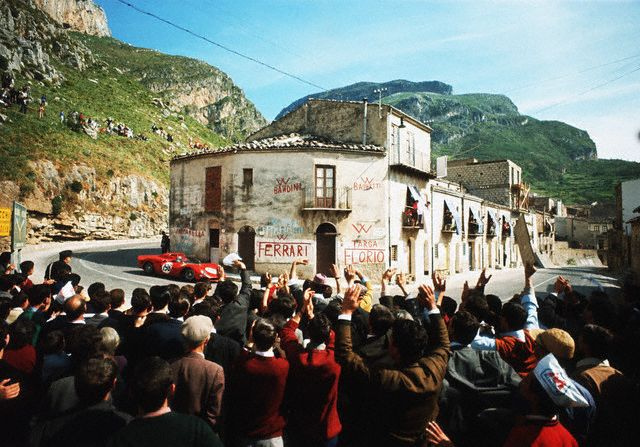 Crowds watch competitors in the Targa Florio race on 9 May 1965, as a red Ferrari races through the Sicilian village of Collesano. Photo by David Lees

Some of the biggest names in motoring could be seen zipping between those mountains. Enzo Ferrari took to the wheel in 1919, passing the finish line in 9th place. His legendary cars would soon screech into view on Sicily for future races. Porsche named one of their cars Targa in honor of the race. Ferdinand Porsche himself won the 1924 event, driving for Mercedes in a self-designed vehicle. Native competitor Nino Vaccarella fared less well, running into a wall having been too busy waving at the crowds in 1962.

It was only a matter of time before things got more hazardous. Surprisingly, only 9 people lost their lives throughout the race’s seven decades. 2 of those were in 1973. Then 4 years later the disaster occurred that shut down the Targa Florio for good – driver Gabriel Ciuti crashed into spectators, resulting in 2 fatalities. Ciuti wound up in a coma. The race was halted part way through.

A sad end, though the Targa Florio has lived on as a regular rally. It undoubtedly left its mark on the people and landscape of Sicily. Petrolicious writes how it became “one of the cradles of racing”. On the other side of the world, Australians and New Zealanders hold their own version of the iconic rev-fest.

Nature’s beauty and man made precision is a seductive blend, even decades on. Petrolicious goes on to say, “those who lived during the years of the true Targa Florio tell me they will never forget the smell of tire rubber and high-octane gasoline mixed with wet grass and ginestra flowers, the smoke of the machines swirling up and dancing with the dust lifted up by the wheels and their sticky slicks.”

« British Museum Moves Bust of Founder – But did he Deserve It?
“Best Lockdown Find Ever!” Chinese Teapot Found in English Garage Worth a Fortune »