“Best Lockdown Find Ever!” Chinese Teapot Found in English Garage Worth a Fortune

An 18th century Chinese teapot from the Qing Dynasty described by its auctioneer as “the best lockdown find ever” is set to go under the hammer later this month. Asking price? More than a cup of tea… it could fetch approx $130,000! Talk about bagging a treasure.

Dug out of a box in an English garage, the Chinese teapot is actually a wine “ewer”, or jug. Measuring 15 cm, it “resembles a teapot” according to BBC News but its pedigree is out of the ordinary. The ewer could well have been used at the table of Emperor Qianlong, sixth ruler of the Qing dynasty. That dates the lot to between 1735-99, in line with his reign.

The Hanson’s Auctioneers website describes it as “brightly decorated on a lemon-yellow ground”, featuring “colourful blooming peonies in hues of pinks, blues and purples.”

So how did it wind up among the spark plugs and bric a brac in Church Gresley, Derbyshire? The 51 year old owner, who works part time in construction, reveals his mother “used to display it in a cabinet. We believe it was brought back to England from China by my grandfather who was stationed in the Far East during the Second World War and was awarded a Burma Star medal.” 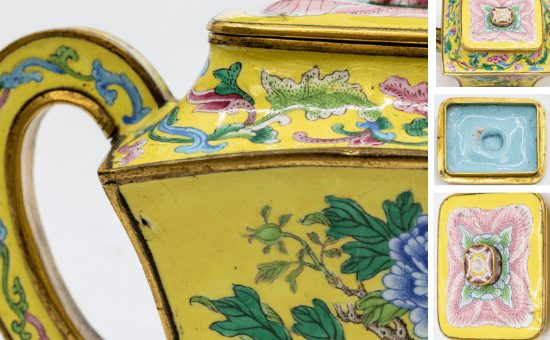 The owner decided to do some research after finding the “teapot” during a lockdown sort out. He then took it to auctioneer Charles Hanson and his team. They discovered just 2 others of this type exist. They are both in museums – one at the National Palace Museum in Taiwan, the other based at Beijing’s Palace Museum.

Another item of interest is the Gold Cup of Eternal Stability, part of London’s Wallace Collection. Their site states the “spectacular wine cup… was made for the Qianlong Emperor. He used them to celebrate the Chinese New Year during a ceremony which took place in the Forbidden City, Beijing.” Believed to have been made 1739-40, the striking gold vessel has kingfisher feathers as part of the design, together with pearls, gemstones and stained ivory. 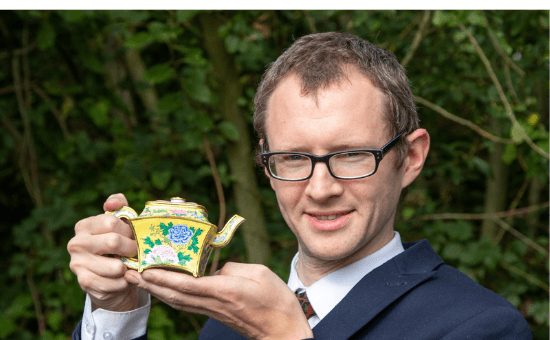 Edward Rycroft with the incredible find. Image by Hanson’s Auctioneers

Emperor Qianlong “was fascinated by European enamel and the new method of enamel painting” says Hanson, quoted by his company site, “and the style was replicated in his imperial workshops.” Apparently “this art form reached heady heights of perfection with designs reflecting the emperor’s extravagant taste.”

The ruler would have been most displeased to hear of the current owner’s reaction on finding the piece. “I admit, we’d been thinking of sending everything to a charity shop” he says, quoted by BBC News. “I dug out a few other bits and pieces for them to value in case they laughed at me when I pulled it out.”

The Emperor reigned from 1735 to 96. History.com writes that his time at the top was “characterized by his own disinterest in ruling” and that he became “more preoccupied with artistic pursuits.” These were reportedly amateur efforts, with his status as ruler influencing any appraisals!

Not that the Qing dynasty itself (1644 – 1912) was a period of refinement. Art that wasn’t to the establishment’s liking tended to be clamped down on. And it wasn’t a good place to be for everyone.”Social mores became more conservative during the Qing reign,” History notes, “with worsened penalties for homosexuals. Increased demand for purity in women led to a mass refusal of men to accept widows as their brides.” Many women took their own lives as a result.

All a far cry from the opulence of a royal palace and its wine tasting. The ewer slash teapot is up for auction on the 24th. Hansons estimate is approx $25 – 51,000, though it’s thought bidding will reach $100 K + once Chinese parties are taken into account. Cheers…!