Firepits With a Touch of Hollywood

Recently, local communities placed a ban on fire burning unless it is in an approved fire pit. This started a major boom in creative fire pits where lack of imagination is the only limit.

TT Custom Fab LLC is offering a fire pit that looks like a smaller version of a Jeep Wrangler for $1165 or a raw steel jeep for $900. Both two door models and four door models are available and choose from a wood burning or propane fuel. Of course, there is no interior as that’s where the fire goes. 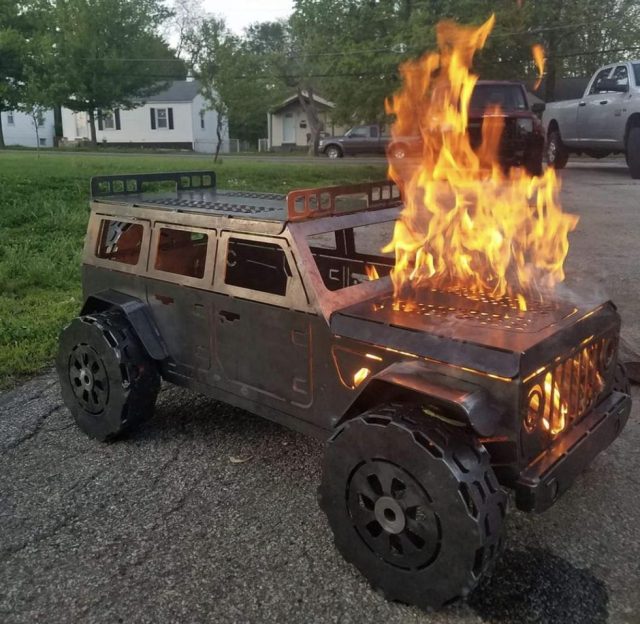 Have an old washing machine sitting around? DIY the old drum into a fire pit. Someone made a firepit shaped like a pirate ship with fire mesh sails. No one is aware of the maker but the picture has been circulated on the internet for quite some time.

Fire tables that stand about thirty inches tall come in both rustic and elegant designs are also becoming popular. Many use natural gas or propane for flexibility.

Most have a fireproof mesh covers to keep large ashes and pieces of wood from falling out. Sunnydaze Fire pits offers several Chiminea style pits as well as a huge copper colored Cauldron fire pit for less than $200.

DigbyScottDesigns from the United Kingdom sells a decahedron for about $750. Patina Products sells custom collegiate fire pits with the name of your school in cutout letters with a five year warranty for under $300.

Blue Rooster, one of the biggest chiminea manufacturers in the United States, makes their chimineas to look like terra cotta but they are actually made of a new material, FirEx.

Rick Wittrig of Tennessee designed the Third Rock fire pit that is a sphere sitting on a base with cutouts of all the continents making it look like a world globe. Some people may find it disconcerting to see the earth on fire but those who may enjoy it need to come up with about $2,000 to make it their own. 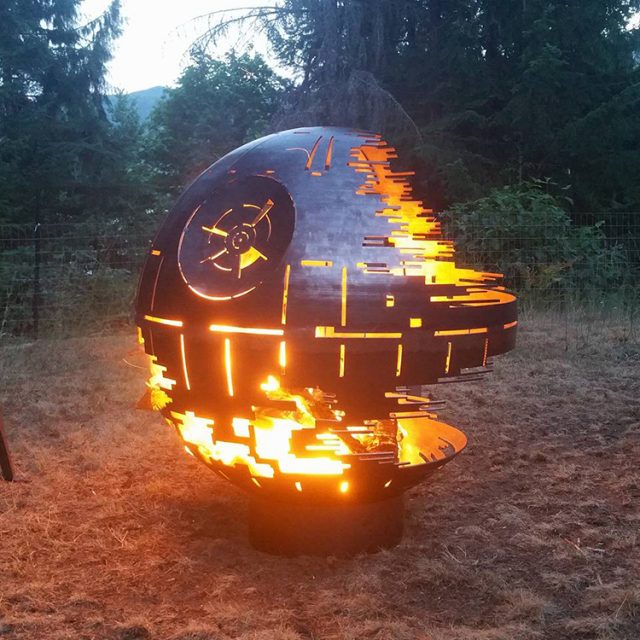 Wittrig also designs fire pits to look like an Asian wok, a round pit with seashells cutouts carved into the sides, the Vesuvius fire pit with a trilateral design that stands about forty eight inches high for less than $1500 and a round bowl type reminiscent of Roman emperor Nero’s bathtub that is housed in the Vatican Museum for about $1700.

AlizeMetalWorks offers a Modern Lines Vertical Fire Pit that looks like an old furnace and BurnedbyDesignLtd offers an Iron Maiden Fire Pit that is quite frightening and a Darth Vader wood burner. 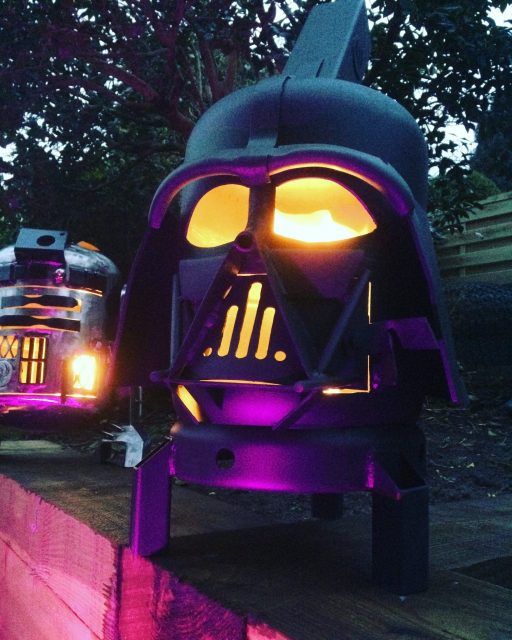 In keeping with the Star Wars theme, they also offer a Death Star wood burner, a Millennium Falcon, a storm trooper and a R2D2 burner as well. Other unusual burners they offer are Freddy Krueger, Predator, Incredible Hulk and Motorhead Snaggletooth.

FireballFirePits out of Audubon, Minnesota sells a spherical globe with intricate filigree cutouts based on nature, another based on mermaids and a Phoenix Firebird.

MasonRiveraSculpture has a hand carved concrete firepit with a glass mosaic inlay by Joe Rivera & Cristi Mason-Rivera and thegraniteguys has a white marble table with a built in firepit fueled by kerosene.

The Rock Place in Elkhorn, Nebraska sells a Moss Rock fire pit with the center carved out for the fire. Even fire pits for inside the house are popular with the Celebration Glass Table Fire Pit offered by OhmygiddyauntUK which uses lamp oil and SolidProcessing’s Zen Garden Color Rimmed Bowl which uses fire gel canisters.

Many of these fire pits are completely unique and handmade but come with a hefty price tag. For those who can afford them, it’s like having a useable sculpture in your yard.e-pit-for-sale/