A Russian chemical company, PJSC “Khimprom”, has a number of plants in Russia that produce chemicals and according to their website at himprom.com.

their mission statement “By developing technologies, improving products and professional skills, we ensure the sustainability of production and help to create high-quality products in various areas of production, ensuring an increase in the quality of life and economic development in the Chuvash Republic and in Russia as a whole.” reads as a wholesome family oriented company. 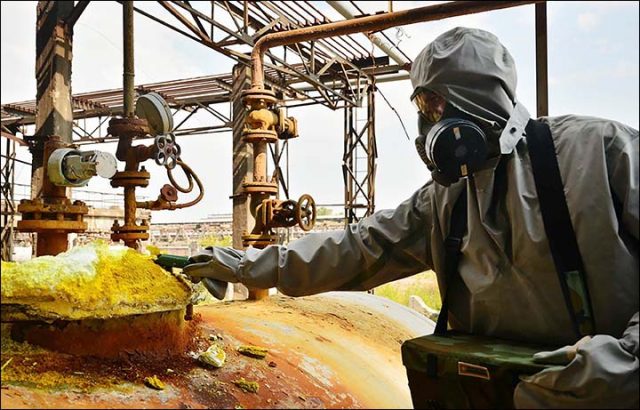 Military experts started their work at Usolyekhimprom. Ministry of Defence

In reality, they are the owners of a long deserted chemical plant that if damaged by floods, fires or severe storms the resulting ecological disaster could be unprecedented.

Referred to as the “Siberian Chernobyl” by siberiantimes.com, the chemical plant in Usolye-Sibirskoye, Irkutsk region had a mercury electrolysis facility that is rotting rapidly and releasing poisonous mercury into the water and soil surrounding the plant.

The company opened in 1933 and was actively producing chemical agents from 1972 to 1998 before it was abandoned in 2017 after it went bankrupt. 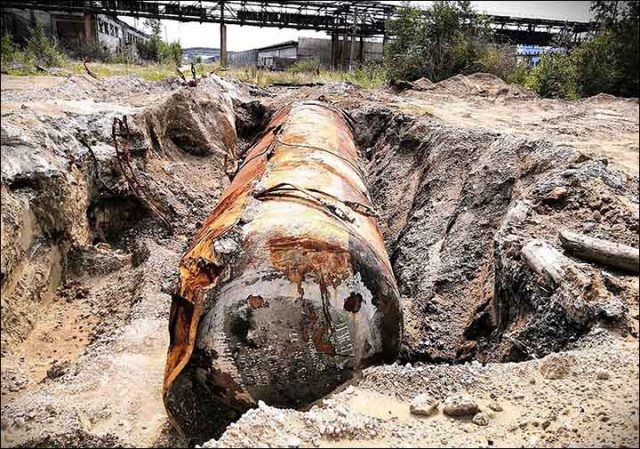 ‘Frankly, nobody has ever done anything about them.’ Credit: Ministry of Defence

The state environmental agency Rosprirodnadzor has measured the mercury and found that the drainage water from the crumbling plant is more than thirty three thousand times higher than acceptable levels and mercury in the air is three hundred and sixty seven times over the quantities deemed safe.

At one time, over one thousand tons of mercury were stored at the plant. In the 1990s it discharged two and a half tons of mercury each month. Over five hundred tons have been found under buildings in the local town just a few miles from the plant site and a mercury lake formed under the soil at the plant.

Testing has been done on the town occupants and high levels of mercury have been found in the urine and hair of the local children. 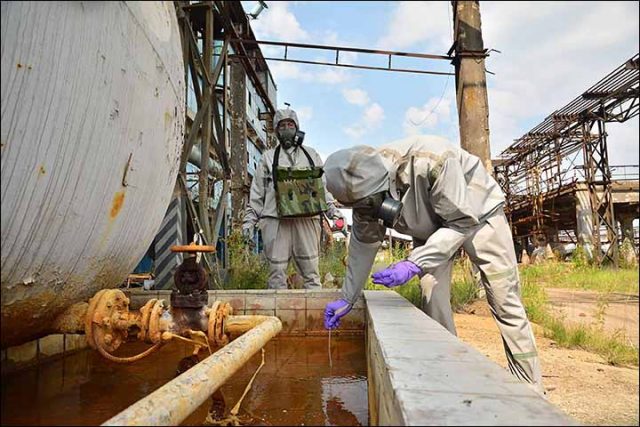 Additionally, according to businessinsider.in, there are pressurized canisters lying around with unknown hazardous substances. Other pollutants discharged by the plant are copper, oil products, iron, lead, zinc and phosphates. 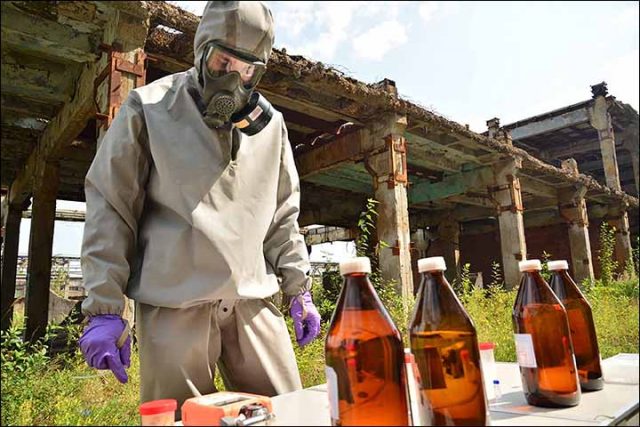 Svetlana Radionova of Rosprirodnadzor fears the toxins will permeate into the Angara River contaminating the Irkutsk region and Lake Baikal, the largest and oldest lake in the world with clear water that attracts diverse wildlife and tourists from just about everywhere. She has also noted that oil waste had been pumped into the plant’s wells.

The concern of floods or fires is very real. In 2019 southeastern Siberia’s Irkutsk region was inundated by floods when heavy rains caused rivers to overflow destroying over eighty villages and killing eighteen people with some still missing.

Since the beginning of August 2020, wildfires have burned more than 15,000 square miles of Siberia with over sixty located in the Irkutsk region. The intense heat now permeating the region at up to one hundred degrees Fahrenheit at the peak of summer has been melting the permafrost and allowing forest fires to burn where it was not possible before.

According to nationalgeographic.com, Russia’s Forestry Agency approximations show millions of acres of land have caught fire in eastern Siberia’s Sakha Republic, Chukotka, and Magadan regions even worse than the historic fires of 2019.

Jessica McCarty, a fire researcher at Miami University in Ohio claims the fires are starting because of the dried up vegetation caused by the abnormally high temperatures but a serious concern is that the peat bogs burning release greenhouse gases which in turn hastens the warming of the permafrost resulting in a perfect circle of destruction.

Amber Soja, an associate research fellow with the National Institute of Aerospace believes the burning of the forests will allow shrubbery and grasses to grow which darken the landscape and trap heat.

Another Article From Us: Green Lake Was Completely Boiled Away During Kīlauea’s 2018 Eruption

“In terms of ecology, I don’t know what’s going to happen,” Soja remarked. “This is pretty far north. I think the damage is extensive. And I think it will take a long time [to recover]. Maybe not at all.”