‘Psycho II’ was Originally a Satire and Hollywood Hated it

‘Psycho II’ started off as a book by Norman Bates’ creator Robert Bloch. And Universal Studios didn’t care for it at all!

Fans expecting a reprise of the previous story were in for a surprise. The plot sees an older Bates murder a nun and don her habit in order to escape confinement. At the same time, a motion picture version of his atrocities is being made.

When cast and crew meet gruesome ends, it looks like Norman is pursuing a brutal campaign against the production. Or is he…? Little White Lies says Bloch’s ‘Psycho II’ “focuses most of its energies on satirising Hollywood’s love of exploiting real-life acts… to sensationalise its cinematic productions.”

The author’s take was pretty out there! So, how did this shocking and unusual sequel come to be…?

If it wasn’t for Bloch, Alfred Hitchcock’s ‘Psycho’ wouldn’t have existed in the first place. He wrote the source novel in 1959. It shares eerie similarities with the Ed Gein case of 1957, which also partly inspired ‘The Texas Chain Saw Massacre’ (1974).

Years later, in 1982, Bloch decided it was time for a follow up. When readers and viewers left Norman, he was committed to an asylum. How to continue the story?

The blood-soaked satire of ‘Psycho II’ depicted the ultimate man with a mother complex dodging a shower and heading straight for the bright lights of Tinseltown. Having explored what goes on behind the scenes of so-called normal life in the first volume, Bloch sank his teeth into Hollywood’s hand in the second. 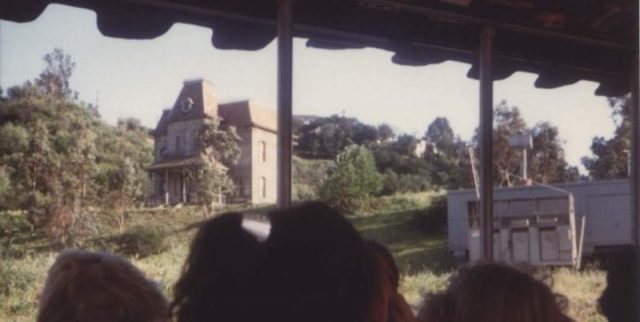 ‘Psycho’ dealt cinemagoers and page turners a blow with its infamous plot twist. Supposed heroine Marion Crane thought it would be a good idea to take a shower before returning the money she stole from her boss. Far from washing her soul clean, she winds up butchered by Bates halfway through the narrative.

Bloch’s ‘Psycho II’ throws its own curveball by having Norman apparently perishing early on. The assumption is he survived and is lurking in the shadows. Spoiler alert… he isn’t! The murders are being commited by Dr Claiborne, Norman’s psychiatrist, who’s become the mirror image of his famous patient. Bates is dead and gone, the former room key handler’s tale well and truly told.

Bloch showed his latest work to Universal. They were no doubt expecting further gory antics at Bates Motel and strongly objected to the book.

Just as Norman had a split personality – in an age where such terminology could be used without controversy – so ‘Psycho II’ divided into 2 entities. There was Bloch’s novel, that reportedly did good business. Then rights holder Universal produced their own sequel the next year.

Anthony Perkins returned to the role of Norman Bates, though initially wasn’t interested. Christopher Walken might have played Norman, had Perkins not responded positively to the screenplay by Tom Holland (‘Fright Night’).

“If you really love the movie that you are extending… you have a much greater chance of achieving something good,” the actor said in a 1983 interview with Entertainment Tonight.

Perkins went on to direct ‘Psycho III’ (1986). A TV pilot called ‘Bates Motel’ came and went in 1987. Bud Cort (‘Harold and Maude’) took the lead as a friend of Bates who inherits his old job.

Perkins then starred in ‘Psycho IV: The Beginning’ (1990). This fourth film, again made for TV, presented the character looking back on his life. Henry Thomas portrayed young Norman, with Olivia Hussey as Mrs Bates. Freddie Highmore and Vera Farmiga played the boy and his mother in ‘Bates Motel’ 2.0. That was more successful, running for 5 seasons between 2013 – 17.

Meanwhile, Robert Bloch contributed one more tome to the franchise – ‘Psycho House’, released the same year as ‘The Beginning’. Norman didn’t rise from the grave, but there was a new wave of killings to keep its protagonist occupied.

Bloch passed away in 1994. Chet Williamson wrote ‘Psycho: Sanitarium’ in 2016 – this prequel of sorts bridges the gap between the first and second books.

Long before horror got post modern with the likes of ‘Scream’, Bloch was there to mock the genre. His ‘Psycho II’ may not be as well known as the movie. Yet it’s an intriguing and amusing diversion into what might have been…

Another Article From Us: Mysteries: 20 Lost Classic Cars & Their Last Known Locations