Ghost Busted: A spiritual guidance counsellor from Britain has taken her own advice and ditched her undead fiancé! 32 year old Amethyst Realm, who lives in Bristol, revealed the sad yet surreal news on ITV’s ‘This Morning’ programme.

The pair “met” in 2018 while Realm was vacationing in Australia. And it was another journey abroad that proved fatal as her beloved – named Ray – began “acting oddly”, according to This Morning’s Twitter feed.

Speaking to hosts Phillip Schofield and Holly Willoughby, Realm said Ray “fell in with a bad crowd” of fellow spirits in Thailand. This led to him becoming “really inconsiderate”, with their getaway turning into a paranormal party.

The Daily Mail reports Ray would “bring back various unknown ghosts into their hotel room”. Realm picked up unwelcome vibes, together with some unpleasant odors. She mentioned “crashing and banging and strange noises.”

After Amethyst met and fell in love with ghost Ray, they’ve now decided to part ways after he began acting oddly.

Watch the full chat on the ITV Hub 🕙👉https://t.co/Q7IV485mUn pic.twitter.com/sLkpArOkUr

If Realm hoped that home sweet home might calm her man down, she was disappointed. When relationship trouble continued, and random guests from the hereafter made a mess of her spiritual plane, she decided enough was enough.

How to eject a problem partner from the premises? The bride-not-to-be cleansed the house with sage and made incantations. “I ended up placing black tourmaline around the house which keeps spirits away” she added. Tourmaline is a mineral and semi-precious stone. Talk about hard measures! 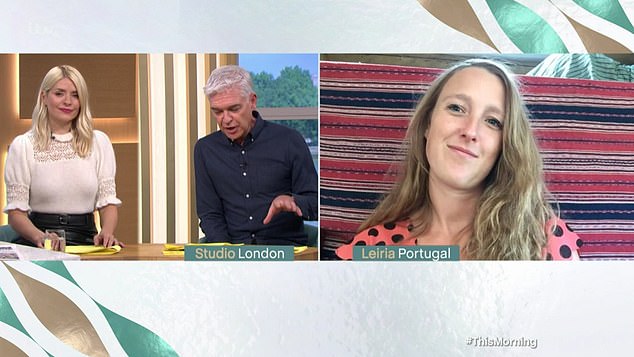 She told hosts Holly Willoughby and Philip Schofield she called off the wedding after a disastrous holiday last May, where she suspected her fiancé of ‘drinking and doing drugs’ Credit: This Morning

An interesting “fact” which emerged is that ghosts are frightened of Covid. Realm thought Ray may have stressed himself out over this, to the point he began acting less like himself. Apparently the afterlife has a social distancing policy!

Realm is one of the latest in a series of eye-opening interviews This Morning has played host to over the years. The long-running magazine show is known for highlighting the kookier and spookier side of life.

Schofield and Willoughby’s penchant for giggling completes the fun, and they couldn’t help but raise a chuckle as Realm described what happened. Realm has actually appeared with Ray on the “This Morning sofa” in person. ITV referred to the split as “yet another surprising twist”. 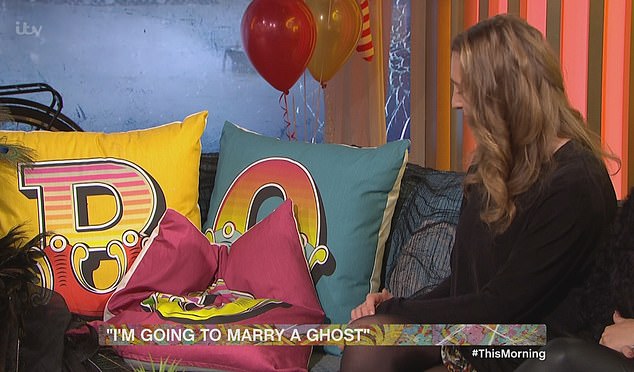 ‘Ghosts also have to socially distance, of course’, she said, ‘It affects us all. They’d get ill just as we would.’ Credit: This Morning

The Mirror writes about a shocking end to the segment, where co-host Alison Hammond disturbed a pot and startled everyone. That, together with technical issues on Realm’s side, suggested the presence of forces beyond human understanding!

Realm and Ray’s plan was to tie the knot at Wookey Hole Caves in the English county of Somerset. Appropriately enough the limestone location has its own ghost, in the form of the Witch of Wookey Hole. This fearsome figure had a reputation for ruining relationships! After wrecking the romantic life of one man, he became a vengeful monk and petrified her with holy water.

The Wells and Mendip Museum features a skeleton said to belong to the Witch. On another eerie note, scenes for classic horror movie ‘The Wicker Man’ (1973) were shot in the Caves.

It’s appeared on the small screen in ‘Doctor Who: Revenge of the Cybermen’ (1975), where the shoot experienced various issues. A DVD documentary talks about a “curse”, visited upon the BBC crew after they made fun of the Witch.

An electrician broke his leg and star Elisabeth Sladen had to jump off her water skimmer after it went beserk. The director Michael E. Briant claims to have met the ghost of a diver there.

The Mail sought the advice of University of London Psychology Prof. Christopher French over Realm’s case. He puts such phenomena down to hallucinations. Realm has also mentioned sexual experiences with ghosts. Prof French associates these with symptoms of sleep paralysis.

Realm is happily single now. Despite her dramatic journey from lovebird to ghost buster she hasn’t ruled out happiness with another spirit…