Archaeologists Dig Up Samauri’s Jar Filled With Over 200,000 Bronze Coins

The fortune of a Japanese samurai was found by archaeologists in the Saitama Prefecture near Tokyo in August of 2018 and has been named the largest haul of medieval coins ever found in Japan.

The coins were found in a large two foot wide ceramic jar dating back to the fifteenth century. The copper in the bronze coins found inside has turned bright green due to the natural oxidation process of verdigris.

The jar had been buried over six feet deep possibly to hide the warrior’s riches which were in danger due to the civil unrest in Japan at the time. 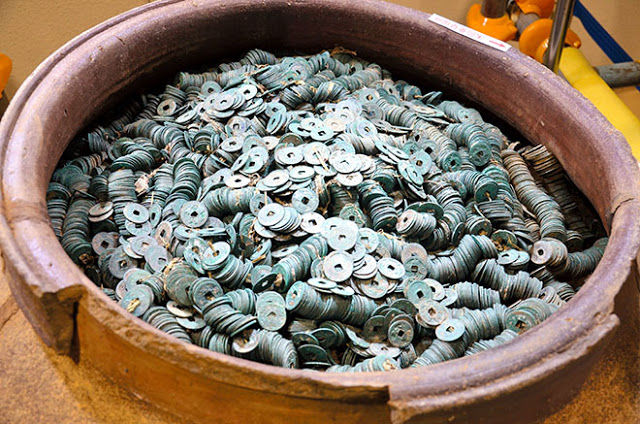 The coins, which have an opening in the center, were strung on rope and included a few varied coins from China’s Ming and Tang dynasties. In total the archaeologists who found the hoard believe there are over one hundred thousand coins but a wooden tablet buried along with the coins.

Including the Japanese words, “nihyaku rokuju” for the number 260 could refer to the measurements of 260 kan which are units of one thousand and would identify that there are two hundred and sixty thousand coins in the jar.

According to gainsvillecoins.com, a string of one thousand coins was worth one ounce of silver and was a common amount to keep on one’s person. During the time when the coins were buried the country was divided and ruled by an Emperor who gave conquered lands to the Shoguns, military leaders. 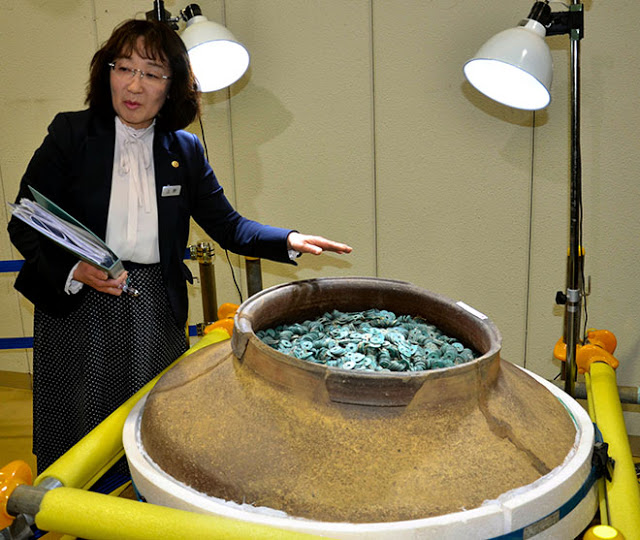 The Muromachi Period from 1333 to 1573AD refers to the Ashikaga Shogunate which saw a war between Ashikaga Takauji and his brother Tadayoshi that lasted for two years with Ashikaga Takauji emerging as the victor. It was at this time that most of the rules for samurai behavior were enacted.

The samurai were an elite guard of soldiers that swore their lives to the daimyo, a sort of land holding military governor for the area in which he lived. They held bravery, honor and personal loyalty above their own lives and would commit seppuku, a ritual self-disembowelment, rather than suffer dishonor.

They were identified by the two swords presented to them by a military leader and were well paid with special perks. 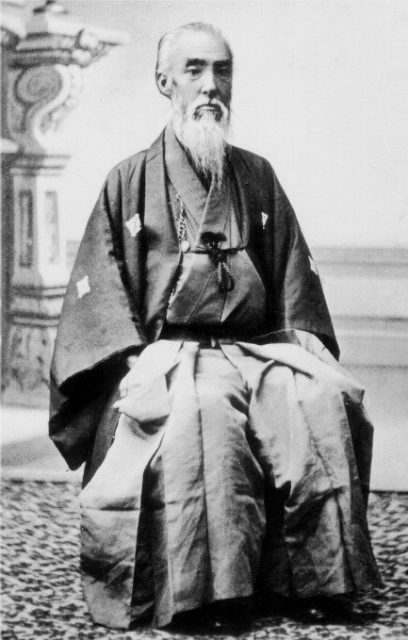 Kamei Koremi, a daimyō during the bakumatsu period

With all of the civil unrest as daimyos began feuding with each other the Warring States period from 1467-1568AD was a time of fighting, murders and deceit among Japan’s rival daimyo warlords and samurai over who would become the next Shogun – a member of the Hosokawa family or a member of the Yamana family.

Since the power of the Shogun was diminished during this time it really didn’t matter and may have been an excuse for the over aggressive daimyos to flaunt their power.

There were no victors and nothing was accomplished after it was over although the ordinary civilians were subject to lawlessness, brutality and extreme hardship.

Some good came from this period as slavery was almost completely abolished and art and architecture flourished as warlords began building castles to protect themselves from invasion.

They were placed at mountain passes and on large estates with moats and other medieval protections. Omi-Hachiman castle near Lake Biwa in Shiga Prefecture drew enough people that a small town was established around the castle.

The Japanese tea ceremony was popularized at this time by Buddhist monks and the Zen religion brought out artists such as the Zen priest Sesshu /Toyo, whose works are still considered some of the best art to come out of Japan.

Ancient.eu tells us that when the warlord Oda Nobunaga began conquering different parts of the country, he eventually was able to take the capital, Heiankyo, in 1568AD and exiled Ashikaga Yoshiaki in 1573AD.

Nobunaga helped to unify central Japan until his death in 1582AD and his efforts were carried on by his successors, Toyotomi Hideyoshi who ruled from 1537-1598 AD and Tokugawa Ieyasu who was Shogun from 1543-1616 AD and began to open trade with the west. The coins are now on display at the Saitama Prefecture’s cultural treasury in Kumagaya.