Three Ancient Egyptian mummies were explored using modern technology earlier this year. But these wrapped dignitaries come with a twist!

The words “I’m taking my Mummy for a CT scan” may sound worrying. Don’t be alarmed – in this context there’s a fascinating historical dimension.

Whereas typically mummies are associated with sarcophagi, the examples here are put together a little differently. In what way? The trio are what’s known as portrait mummies, which use a stucco-shrouded design. Instead of being sealed in boxes, the sacred candidates were rested on planks. 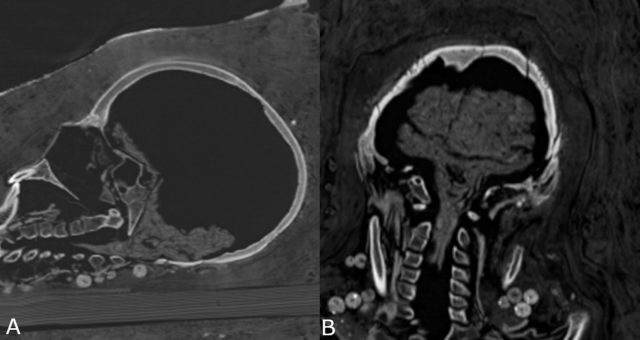 Doesn’t sound too reverential, yet the outcome is beautiful to behold. There was wrapping involved but also a fair amount of plasterwork and gold detailing, together with a full size artist’s impression of the person within.

As reported last month, they are a man, woman and teenage girl, each with an interesting story to tell. A team, including Egyptologist Dr Stephanie Zesch, gave the bodies a CT (Computed Tomography) Scan, publishing the findings on the PLOS One open access science journal.

The mummies date back to the Late Roman period (30 BC – 395 AD). Hailing from the Saqqara necropolis near Cairo, they’ve traveled a lot over the centuries. In 1615 composer Pietro Della Valle acquired the 2 grown ups and made a home for them in Rome.

It was reportedly the first time such items had been seen on European shores. They were taken from a tomb cut from the rock at Saqqara, according to sciencetimes.com.

By the late 20th century the pair underwent an x-ray scan in their new location of the Dresden State Art Collections, Germany. 40-odd years on and time has taken its toll.

Writing in PLOS One, the team comment: “Due to the rather poorly preserved bodies of the male and middle-aged female, a specific technique of artificial mummification could not be ascertained.”

Thankfully, enough could be seen via the CT scan to draw some conclusions. The man is approx 30 years of age, with a height of 5 ft 4 ins. 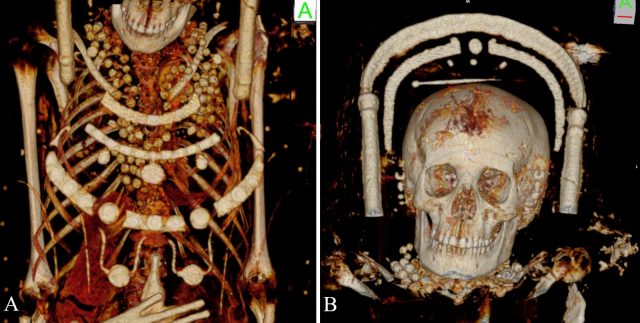 (A) numerous beads around the neck and on the thoracic region, suggesting an intact necklace/or several necklaces; (B) a hairpin on top of the head indicating an upswept hairstyle.. Zesch S, et al. PLOS One / CC BY 4.0

He’d also been roughed up, though not by his Egyptian contemporaries. Some bones are in disarray, with breakages. This suggests a person, probably from the 17th century, handled him badly.

As for the woman, she appears to be in middle age. Standing at 4 ft 11 ins, she had arthritis in her left knee. Both were mummified with their organs, as was the approach back then. Death was no barrier to Ancient Egyptian life. Details such as coins to pay Charon, ferryman to the afterlife, are in evidence.

The brains of the couple have perished. Yet the teenager’s grey matter is preserved reasonably well, except for shrinkage. 5 ft 1 ins tall, she wore a hairpin.

She wound up in Cairo, at the Museum of Egyptian Antiquities. On a morbid note, she was afflicted with a tumor in her spine.

(A) thick-slab mean intensity coronal multi-planar reconstruction illustrates one metal object close to the right femur, suggested to be a translocated metal seal, and another metal seal on the outer textile layer (arrows); (B) sagittal multi-planar reconstruction visualizes parts of a broken wooden board placed beneath the body (arrows). Zesch S, et al. PLOS One / CC BY 4.0

The man and the woman held vessels in their portraits. Ancient Origins describes how he carries a gold cup and flowers. She is given an oil-filled “lekythos”. The 2 females were adorned with beaded necklaces inside the plaster.

Mummification seals are noticeable in the scans and these “appear similar to nails or arrows”. In the case of the adult woman they were “located near her stomach”. Meanwhile, “two lead objects were also discovered in the male”.

It’s incredible the evidence even exists in the first place. Referring to Dr Zesch’s findings, Science Times writes, “since there was evidence of small amounts of embalming substances, the mummies stayed preserved through a dehydration process using natron.” Natron is a mineral salt.

And their identities? That’s a trickier question to answer, though the 21st century scan has produced some eye opening results, no doubt aiding future studies. Whoever they were, they must have been important to receive that kind of treatment.

The mummies’ original resting place of Saqqara – near the ancient capital of Memphis, Greater Cairo – has entered the streaming age, thanks to Netflix series ‘Secrets of the Saqqara Tomb’. Fortunately for the beleaguered Egyptian tourist industry, multiple precious finds have been made in the necropolis recently.

At one point a mummy was opened before the press. Reporters were told about “an adult male, perhaps in his 40s, whose brain was removed through his nose as part of the embalming process” (Smithsonian Magazine).

Vivid imagery can’t help but bring the ancient world to life for modern onlookers. 2020 may be a terrible year for humanity but it’s treated this slice of history surprisingly well…