Viking ship: Archaeology used to be a trial and error process. Dig a test pit and if nothing comes up continue digging test pits until one yields results. An archaeologist can be just feet from an exciting find but if nothing is found in test pits they don’t know it.

Now with high resolution georadar historical finds can be located without raising a shovel. One example is a Viking ship, burial mounds and longhouses found in Østfold County in Norway.

The georadar system was developed by the Ludwig Boltzmann Institute for Archaeological Prospection and Virtual Archaeology and gave archaeologists Lars Gustavsen and Erich Nau from the Norwegian Institute for Cultural Heritage Research the ability to see below the ground where they found a sixty foot long vessel less than two feet below the soil in 2018. 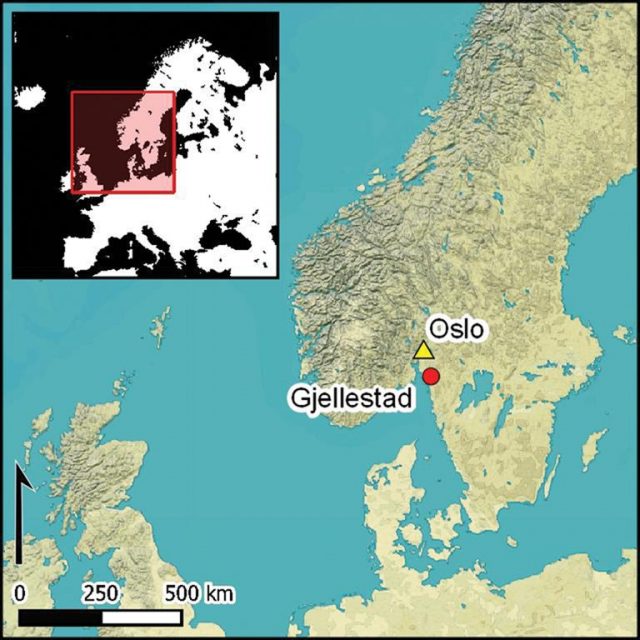 Early in 2017 the landowner had made a request to install a drainage ditch and as with much of Europe, the land had to be investigated by archaeologists for any historical findings.

According to smithsonianmag.com, the field in which the ship was found also had a long feast hall, a temple, farmhouses and thirteen more burial mounds leading the scientists to believe it was a part of a large gathering complex for trade and daily life.

The new discoveries are near the Jell Mound, one of the largest funeral mounds in Scandinavia that dates to about 550 to 1050AD but the ship was dated to the apex of the Vikings, about the 10th century AD.

So far, there is no way of knowing if someone was buried in the ship but this is an exceptional find as it is the first discovery of a Viking ship in over one hundred years with the last one being excavated in 1904 in Oseberg.

Many of the mounds were flattened by plowing over the years including the mound over the Viking ship which is why georadar is so helpful.

The fact that a ship was buried with a possible body indicates a very elite burial. Ancient-origins.net tells us Gustavsen remarked, “The site seems to have belonged to the very top echelon of the Iron Age elite of the area… where political and societal influence was displayed and maintained and from which political and societal control could be exerted.” 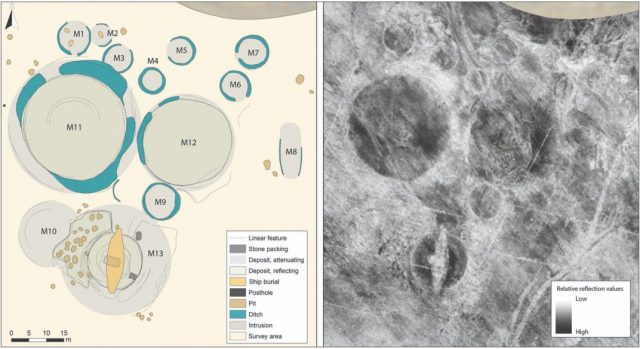 Interpretation map of the mound cemetery based on the full depth-range of the GPR dataset; right) corresponding depth slices from the depth-range 0.3–0.8m below the ground’s surface (map source: © Kartverket/CC-BY-4.0; figure by L. Gustavsen).

Archaeologist Christian Løchsen Rødsrud of the University of Oslo is leading the team that is excavating the ship and they are trying to excavate as quickly as possible due to the condition of the wood.

During the 19th century part of the ship was dug up and the locals, not understanding the significance of the find, took some of the wood for burning.

In the mid-1900s the landowner unknowingly installed a drainage pipe directly over the ship which allowed moisture to permeate the wood causing a fungal infestation.

Pretty much all of the ship has rotted away except for the keel but archaeologists believe much more information can be gleaned from the burial and surrounding building foundations.

Khm.uio.no tells us the area around the ship is covered with a makeshift building similar to a greenhouse to protect it from the elements and prying eyes.

During Alltid Viking (Always Viking) week in September the Norwegian Broadcasting Company sent a crew to document the excavation giving the public a better idea about how archaeology is done.

The program was livestreamed and viewers were able to call in and ask questions. During that time a line of nails that once fastened the strakes to the prow were found as well as the remains of a large animal, possibly a horse or an ox.

The further down the scientists go, the better preserved the finds, giving them hope that more objects could be buried around the ship.

The excavation was scheduled to end in November but is continuing on through December. Normally the site would be open to public tours but because of Covid-19 those have been postponed.

« The Ancient Ghost City Of Ani “the city of a thousand and one churches.”
The Ashes of Star Trek Legend James Doohan Were Smuggled Into Space »