Star Trek legend James Doohan went on a top secret mission to the International Space Station… after his death! The USS Enterprise’s “Scotty” boldly went where no man had gone before. Of course, various individuals have been at the station over the years. But not quite like this!

Before passing away, Doohan made it clear he wanted to be among the stars. “My dad had three passions: space, science and trains,” his son Chris told The Times. “He always wanted to go to space.”

Getting him to the ISS was a challenge worthy of Mr. Scott himself. He nearly got there in 2008, on a Space X rocket that didn’t reach orbit. The company launched him again in 2012. NASA recognized the significance of the move, but wouldn’t assist in helping the family realize Doohan’s dream.

However, in true Star Trek tradition, there’s a twist. Unbeknown to most, Doohan’s family made another attempt – this time of the covert variety. Richard Garriott – a video games master turned private astronaut – was due to go on a 12-day mission to the station in 2008, with the Russian space agency Roscosmos.

Quarantined in Kazakhstan, he received a message from Chris Doohan. The timing wasn’t perfect, as Garriott was “forced to bypass the official process necessary to bring objects aboard the station,” according to The Independent.

Nevertheless, Garriott agreed to fulfill the hardy Starfleet engineer’s request. Chris posted the ashes to the intrepid entrepreneur, who kept his special delivery under the radar.

Scotty flew by the seat of his pants many a time aboard the Enterprise. This last-minute dash to ISS was only fitting!

“After they arrived, he laminated the ashes into three photos of Doohan and smuggled them into his flight data file,” writes Engadget. These cards were worthy of a spy film.

One was presented to Chris Doohan on Garriott’s return. Doohan framed it, tweeting an image of the result over Christmas and finally revealing his Federation-sized secret to the world.

What happened to the other two cards? One was released into space, while the other is still on the Columbus module. Garriott reportedly hid it beneath the floor cladding. 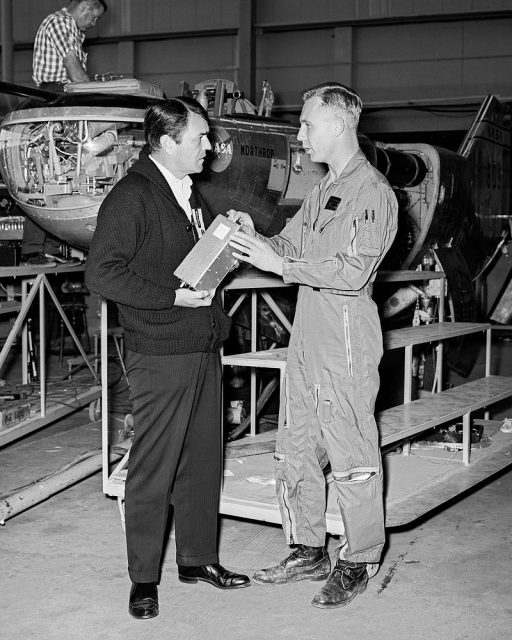 The daring operation was the capper to a quite literally stellar career for Doohan. The Canadian actor and soldier became world famous for his portrayal of Montgomery Scott (Montgomery being Doohan’s own middle name). His parents were Irish, which may have helped him create the character’s distinctive Celtic accent!

Starring in the original run of Star Trek (1966 – 69), he went on to appear in many of the movies. Doohan also met the future Enterprise crew for ‘The Next Generation’ in 1992. 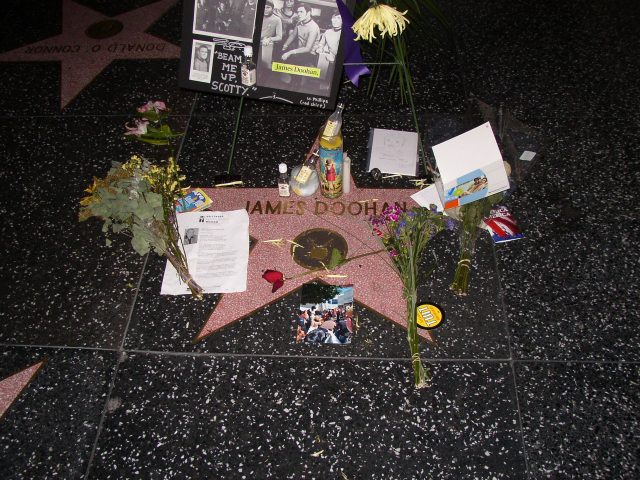 Chris also became an actor, appearing in the critically acclaimed ‘Star Trek Continues’ web series. The fan-made production faithfully recreates the spirit of 1960s Trek, and has even welcomed original cast members and personnel to the team.

Garriott and Chris Doohan believe the time was right to spill the beans when they finally did – 12 years after the fact. USA Today wrote about the epic journey James Doohan has undertaken since his covert trip aboard ISS. He’s reportedly “traveled nearly 1.7 billion miles through space, orbiting Earth more than 70,000 times.”

Another Article From Us: ‘Scotty’ from Star Trek Took Part in D-Day and was Shot 6 Times

Mr. Scott famously couldn’t change the laws of psychics. But he definitely defied the odds to take his rightful place in the heavens.