Modern day thieves are sending back stuff they stole from ancient Pompeii, together with letters of apology. How come? Well, it seems a curse may exist in this tragic city!

Light fingered tourists have actually been returning their ill gotten gains for a while. As reported by Italian news outlet Il Messaggero and covered by sources such as IFL Science, a recent return grabbed the attention of officials.

A travel agent arrived at a police station one day with a package, plus letter. And what a letter. The tale of sorrow and remorse came from a “Nicole”, based in Canada. 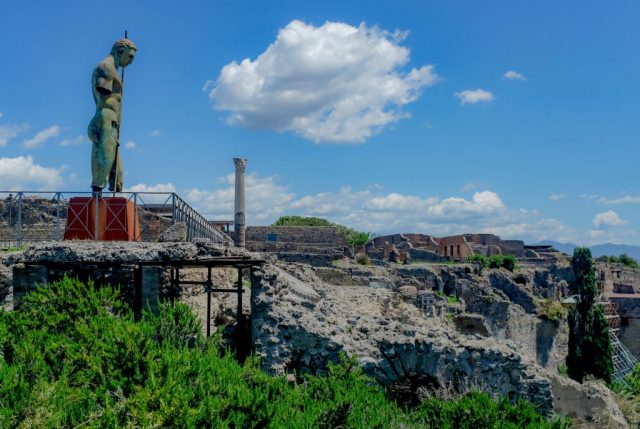 As a 21 year old she visited Pompeii and decided to smuggle some things back with her. Fragments including pottery and mosaic tiles accompanied her back home. But so did bad fortune.

Declaring her younger self “young and stupid”, Nicole (now 36) revealed that over the years she’d experienced money problems. Worst of all she went through 2 battles against breast cancer.

For her, the items she’d taken from Pompeii played the main role in her strife. “I am asking the forgiveness of the Gods” she wrote. 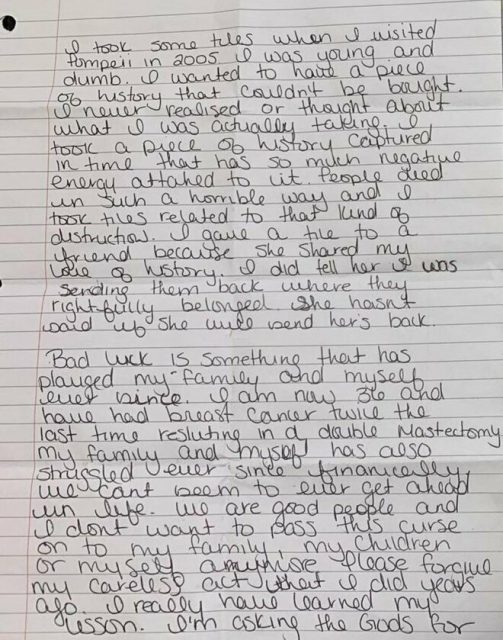 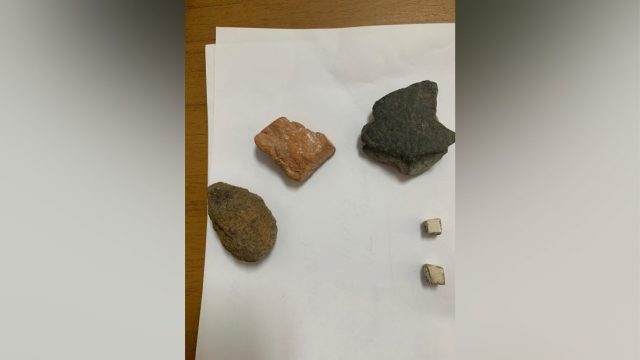 Tying the pain and suffering of Pompeii’s citizens with her own peril, she’s attempted to make things right. Also mentioned is a desire to go back to the doomed location and apologize face to face.

Whether the long-dead victims of Mount Vesuvius will hear her words is a question for higher powers. AD 79 was the fateful date when volcanic forces smothered the landscape in molten rock and deadly gas.

Pompeii and neighboring Herculaneum went down in history as venues of death and destruction. Ironically the boom times back then came via the area’s rich, black soil. Its fertility and color were due to previous eruptions, something citizens only found out when it was too late. 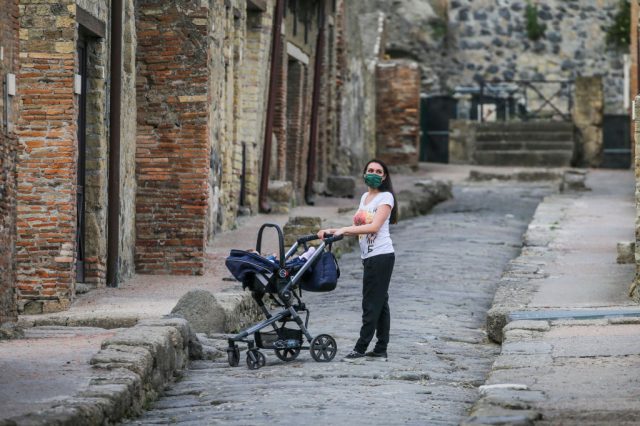 The human remains of Pompeii can’t technically speak, though archaeological evidence reveals how they lived… and, upsettingly, how they met their end.

Late last year news broke of a “Master and Slave” found lying prostrate in an underground space. Believed to be hiding from Vesuvius’ wrath, the pair couldn’t escape their fiery fate. Details of clothing were discovered through plaster casts, made by using the imprints in the ash as a mould. 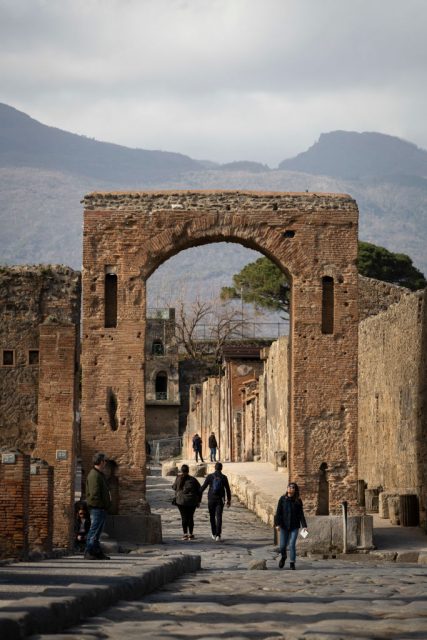 A woman walks past a statue in the Forum at the Pompeii Archeological Park. Getty Images

The Corriere reported in 2015 on superintendent Massimo Osanna – Archaeological Park Director at Pompeii – and his public display of visitors’ apologies. Paying tribute to the extensive thievery taking place on site, Osanna decided to create “a permanent exhibition of these items and the accompanying remorse”, according to IFL Science.

Approx 50 packages make up the unique attraction. Osanna talks about a case where a mosaic piece was sent back by the English daughter of pilfering parents, who’d appropriated the item decades ago. When she inherited it, the responsibility weighed heavily on her conscience.

The threat of a curse is taken seriously by some. Yet imaginations can run rampant. Take an example where a bronze statue, missing since 1987 and depicting Pompeiian banker Cecilio Giocondo, was returned.

The thief may have expressed fear and regret in a letter, citing the presence of an “evil eye in the family”. However, they probably needn’t have worried… the piece is in fact a reproduction!

Mention is made of a couple, named as Alastain and Kimberley by Il Messaggero, who took stones from Pompeii and the volcano itself. Pouring their hearts out, the letter reads: “We are sorry and please forgive us for making this terrible choice.”

It’s a sad fact of life that history will always be plundered by the present. In this case however it looks like the ancient world is getting its own back. The issue may be all in people’s minds, but the result is no less effective for that…