Young Guns 3! Emilio Estevez and the Gang are Back in Another Blaze of Glory

‘Young Guns 3’ is saddling up with original stars Emilio Estevez, Kiefer Sutherland and others. That’s according to John Fusco, who wrote the first 2 instalments.

Fusco tweeted the news on Jan 15th. For those having trouble picturing what a 21st century Young Guns would look like, he’s posted a Spaghetti Western style concept poster with the title ‘Guns III – Alias: Billy The Kid’.

The word ‘Young’ is obscured by bullet holes, showing a lot of water has passed under the bridge since audiences last met these characters.

Accompanied by the tagline “Some legends never die”, the image heralds in Fusco’s words “the continuation of the Billy the Kid saga”. He adds, “and you’re going to love where it goes”. As for where that is, commentators are naturally assuming the action will pick up during (real name) Henry McCarty’s later years. 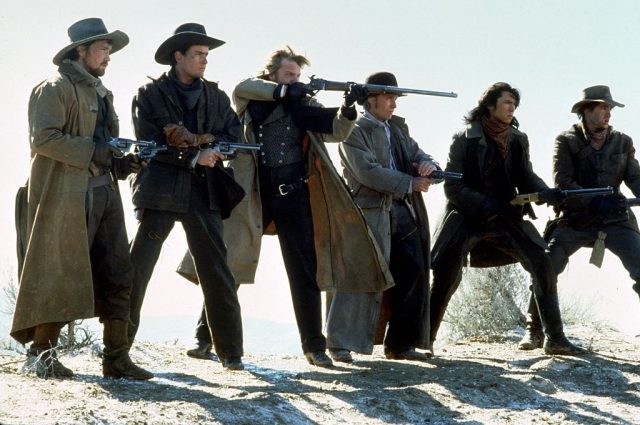 Not that McCarty had any later years. In real life he died, shot down in 1881 aged just 21. Principal players Estevez, Sutherland (“Doc” Scurlock) and Lou Diamond Phillips (José Coby Frey Chavez y Chavez) are into their fifties. However the movies indicated the Western legend was very much alive, chiming with a long-held belief that he faked his demise.

Website JoBlo notes Fusco name checks some actors, “even stars whose characters died in the first two”. Alongside those previously mentioned are Christian Slater, who appeared in Part 2 as “Arkansas” Rudabaugh.

There are new faces in the frame also. Fusco tags Guardian of the Galaxy Chris Pratt, plus character actor Vincent D’Onofrio, himself no stranger to franchises via ‘Men In Black’ and ‘Jurassic World’ (where he performed with Pratt). JoBlo highlights the pair’s involvement in the 2016 ‘Magnificent Seven’ remake, speculating a crossover could be on the blood-spattered cards.

Lou Diamond Phillips has acknowledged the news on his Twitter account. Movieweb writes this is “seemingly confirming his involvement”. 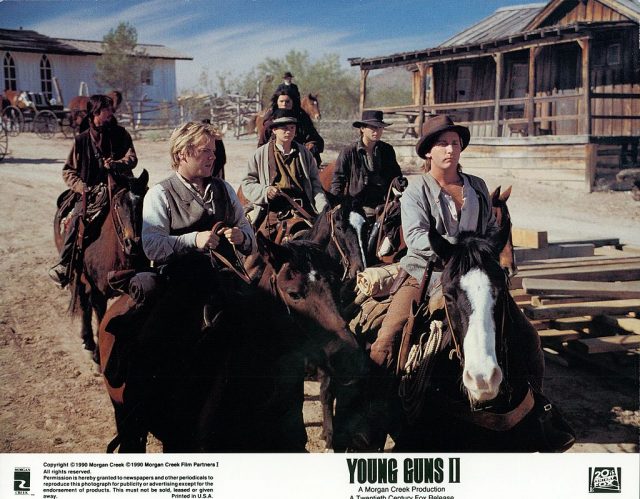 Fusco takes a trip down memory lane with 2 additional images posted on Twitter. One from the making of ‘Young Guns II’ and another with Estevez standing in front of what looks like the Kid’s grave.

Easily dismissed by some as The Brat Pack Meets The Wild West, ‘Young Guns’ (1988) was a serious attempt to tell the story of Billy The Kid. The movie follows the burgeoning gunslinger as he fought during the Lincoln County War.

The film proved a hit, making over $45 million. ‘Young Guns II’ arrived in 1990. Future stars Viggo Mortensen and Bradley Whitford were among the supporting cast. In the sequel, Estevez played the roles of both Billy and Brushy Bill Roberts. Roberts was a true life figure who told people he was the Kid in 1950.

The plot featured Billy and gang The Regulators. Musician Warren G is also included in Fusco’s tweet – he referred to ‘Young Guns’ in 1994 track ‘Regulate’ with Nate Dogg. The outlaw’s legacy clearly struck a chord… his Twitter handle is @regulator. Will he be contributing to the soundtrack?

Jon Bon Jovi cameoed in ‘Young Guns II’ and wrote the hit song ‘Blaze of Glory’. Estevez reportedly wanted Bon Jovi’s ‘Wanted Dead Or Alive’ but instead got a whole new track for the movie.

The posse have since gone their separate ways and onto other things. Estevez is a noted director as well as actor. Sutherland continues making movies and achieved major small screen fame as Jack Bauer in ‘24’. Diamond Phillips is currently starring in hit TV drama ‘Prodigal Son’ and released a sci-fi novel last year to some acclaim.

As well as writing ‘Young Guns’, John Fusco provided screenplays for adventure film ‘Hidalgo’ (with Mortensen) and Netflix’s ‘The Highwaymen’ with Kevin Costner and Woody Harrelson.

This unexpected trip back in time combines late 20th century nostalgia with the down and dirty setting of the Old West. Are audiences ready for the further adventures of some Not-So-Young Guns? Fusco and Estevez certainly hope so as they dust off their stetsons…