The Greatest Archeological Looter Has Finally Been Caught

Thanks to the French authorities, twenty-seven thousand and four hundred illegally obtained artifacts have been discovered at the home of a Frenchman living in Belgium.

Much of the haul was from Roman times but some were from the Iron Age, the Renaissance and the Middle Ages. According to news.artnet.com, it all started in October of 2019.

A man called Patrice T. notified the Flemish Organization for Immovable Heritage that he had recently found over fourteen thousand coins on his newly purchased property in Gingelom, Belgium. Archaeologists went to Patrice’s property and he showed them two large pails filled with coins that were in the trunk of his car. 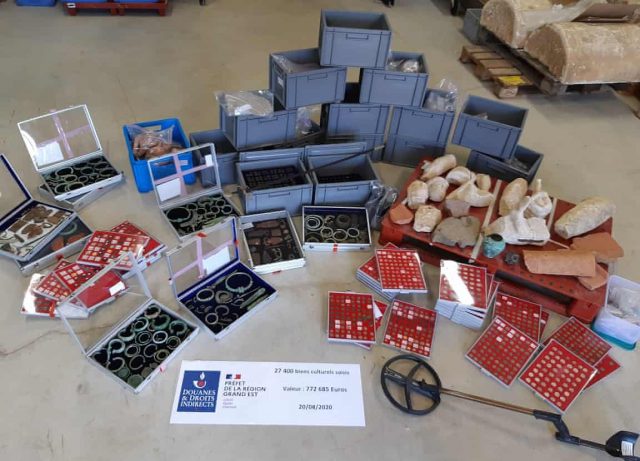 Archaeologist Marleen Martens sensed something was fishy and notified French authorities. According to nieuwsblad.be, Martens remarked, “During the site survey we concluded that it was impossible for the coins to have come from this site.

They were located in an earth layer that was formed after the Middle Ages. A few coins could exceptionally still toss up. But 14,000?” Apparently, Patrice had buried illegally dug coins on his property and claimed they had been found there.

While it is legal to excavate on your own property in Belgium, it is illegal in France to use a metal detector without special permission which is very difficult to obtain unless you are an accredited scientist with a specific academic purpose.

Patrice thought he could get away with claiming his finds were legitimate when, in fact, they were mostly dug up illegally in France. After the French authorities got involved a raid was set for Patrice’s home where they found over nine hundred thousand dollars’ worth of artifacts.

According to smithsonianmag.com, one of the most important relics in Patrice’s collection was a Roman copper dodecahedron. 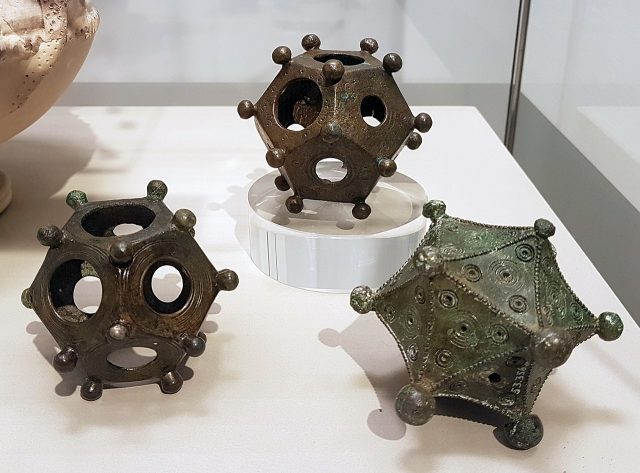 Two dodecahedra and an icosahedron on display in the Rheinisches Landesmuseum (Bonn, Germany). Kleon3 – CC BY-SA 4.0

The small hollow device is made with twelve flat pentagonal panels with a hole in the center of each. No one knows for sure what the object was used for but there are many theories.

Some believe they held yarn for knitting while others have thought they were candlesticks, something similar to dice for games, religious relics or just decorative sculpture. Regardless, only about one hundred have ever been found and they are quite valuable.

Other objects found were bracelets; necklaces; torques – thick metal necklaces that don’t join together but have decoration at each end and frequently worn by Viking men; Roman fibulae- brooches which held clothing together; more ancient coins; belt buckles from the Merovingian and Renaissance era and parts of ancient statues. 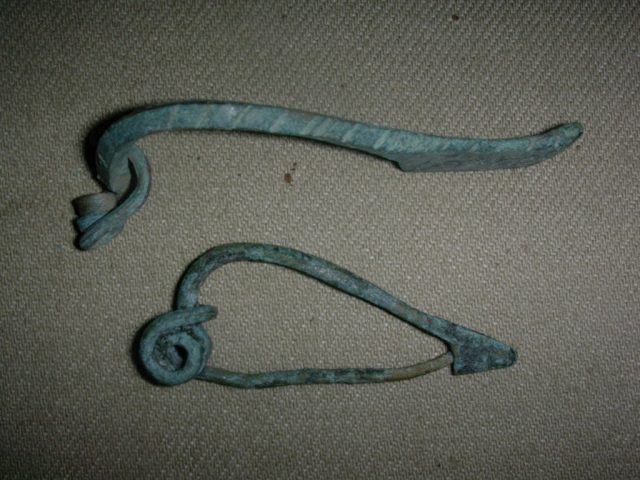 France24.com tells us Economy and Finance Minister Bruno Le Maire claimed that “This seizure is a clear message to those who — for the profit and the selfish pleasure of a few — deprive us of our shared heritage and erase entire sections of our history.”

Patrice has not yet been tried but Le Maire believes there is enough evidence to send him to prison and fine him hundreds of thousands of euros.

This is not the first time Patrice has come up with artifacts he claimed he “found”. He dug up over five thousand coins in 1993 and claimed he had found them alongside the road in France. The mayor allowed him to keep the coins as he had no reason to doubt the man and archaeological experts were not called.

The Guardian has called Patrice “one of the greatest archaeological looters in European history” and it is believed he is very educated in archaeological matters giving him the knowledge of where to look for treasure in France.

Another Article From Us: Ancient Rome Brought Back to Life in 3D – Amazing Work

Patrice’s collection was perfectly cleaned and sorted in display cases with most of the coins in special boxes used by collectors and it is believed he has been illegally selling and trading artifacts for years.