A possible sighting of the Loch Ness Monster in late November has rounded off an extraordinary year for Scotland’s world famous mystery, Nessie.

There’s one thing that Covid doesn’t seem to have affected… the Loch Ness Monster! Sightings are reportedly healthy during the year of lochdown… sorry, lockdown.

A shape, described as seal-sized by her partner, was visible from their Highland vantage point. As reported by The Official Loch Ness Sightings Register, the thing “surfaced, disappeared and then reappeared over a period of five minutes”. 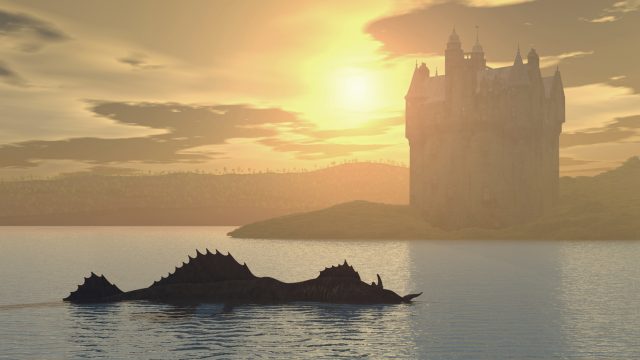 Thankfully Scott had a camera to hand, snapping the shape as it headed for shore. It didn’t emerge for a full on monster shot but whatever the life form was, it’s now part of the long-running chronicles of Nessie.

“It didn’t dive under the water but slowly went down under” said Scott, quoted by the Daily Mail. While it resembled a seal, she adds it “didn’t bob about like a seal would do”.

She also expressed doubts over whether the sighting is the same Monster that sparked worldwide speculation in 1933. Reports are believed to date back to the 1870s, or even 565 AD depending on the source!

However it was the Loch’s water bailiff Alex Campbell who published the original, attention-grabbing coverage in the Thirties. The Inverness Courier piece appears to contain the first reference to a “monster” by way of description.

The story concerned another couple, Aldie and John Mackay, who spotted a large, fishy presence from the road. The same year a photo was taken by Hugh Gray. Yet the most well-known image is probably that of Robert Wilson, a surgeon who snapped the defining image in 1934. 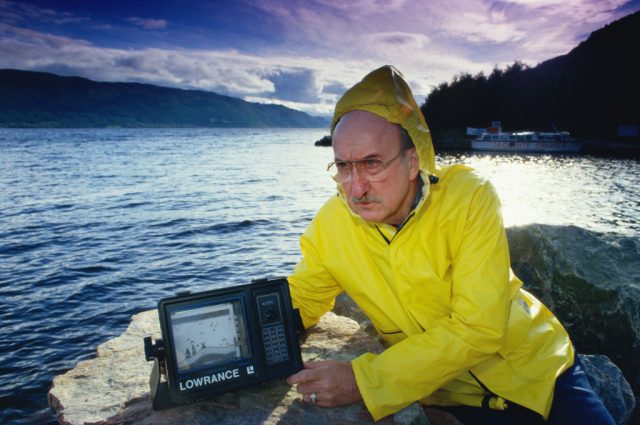 Scientist Thayne Smith Lowrance with a sonar device during one of his many attempts to find the legendary Loch Ness Monster, Scotland, February 1999.

The snap is magical, shows a fair amount of the creature… and for some commentators is a stone cold fake. Behind Wilson’s activities was reportedly one Marmaduke Wetherell, who’d previously attempted to dupe the press with hippo prints. A toy submarine was apparently utilized for try no.2.

Thought to be anything from an ancient plesiosaur to a giant catfish, the records and sightings have piled up. In popular culture the creature has been depicted as everything from an alien-controlled cyborg (‘Doctor Who: Terror of the Zygons’) to a blood-curdling threat to Mankind in 1981’s ‘The Loch Ness Horror’, actually shot in California. 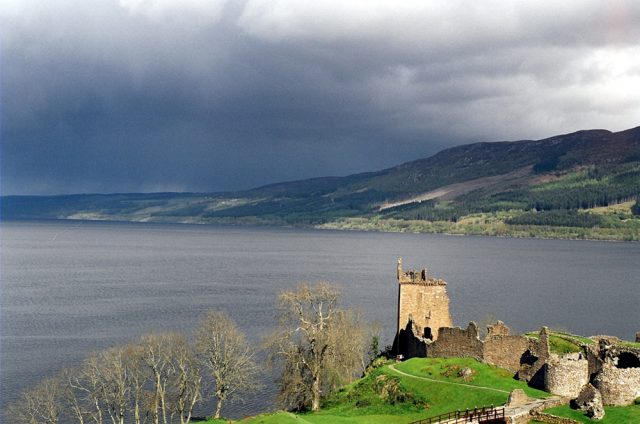 Arguably the ultimate social distancer, the creature is capturing the public’s imagination more than ever. The Sightings Register, run by Gary Campbell, details 13 sightings in 2020. This is despite the Castle being off limits to tourists during the pandemic.

Earlier in the month, an account came in from Louise Power. She and her mother were on the Great Glen Way when they noticed something travelling through the water.

The Inverness Courier was on hand to report the story on New Year’s Eve. Power says the beast “was quite big and whitish grey. I couldn’t put an exact size on it – other than it was big.”

Adding to the tally of sightings is the Register’s webcam, where virtual visitors can search for Nessie at their leisure.

The site is keen to steer interest in the right direction. With the nature of Nessie so ambiguous, animals such as seals, eels and objects like logs can easily cause confusion.

According to the “What’s not a sighting” section, swimming deer have been thrown into the monstrous mix. The natural world also produces potential terrors on a micro scale. Campbell’s site notes that insects can be unexpectedly magnified on camera to inspire monster hunters!

A recent documentary covered Prof Neil Gemmell’s attempt to locate the creature via extensive DNA testing of the loch’s waters. He found evidence of eel DNA, tying in with what some have said about the monster being a jumbo-sized – and somewhat slippery – customer. Aside from that, nothing conclusive was drawn.

Another Article From Us: Ancient Rome Brought Back to Life in 3D – Amazing Work

Until the monster him/herself decides to pop out and say hi, the case remains open. Happy New Year Nessie…!

« Larry King: Legend of the American Airwaves Passes at 87
USSR’S Superspy Lived in the Cotswolds, Locals Knew ‘Mrs Burton’ for her Cakes »