Garden Ornament Turns Out to be a Roman Artifact Worth Thousands!

Turns out this old slab from an English rockery is actually a valuable 2nd century Roman artifact. And it’s up for auction sometime this year. The price? Approx $20,000!

The news was broken just before Christmas by Woolley & Wallis of Salisbury, Wiltshire, who are handling the astonishing find. But before it landed on their doorstep, the slab had been on quite a ride.

In fact it was a horse – as well as a house – owner who spotted an ancient engraving on its surface. The realization wasn’t immediate… Live Science reports she “used the mud-covered stone for a decade as a mounting block” to get from ground to steed! 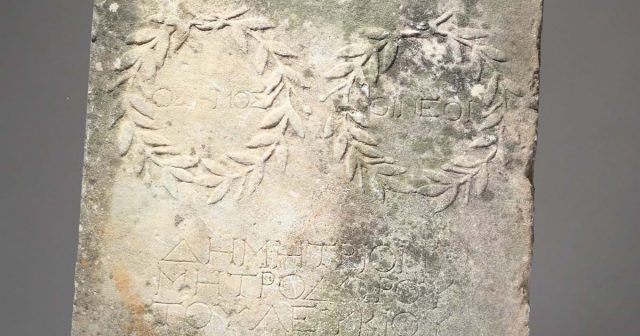 Caked in mud, the 25 inch long slab went from garden rockery to stable shortly after the owner moved in 20 years earlier. According to The Daily Mail the mud was gradually washed away, revealing a depiction of a laurel wreath.

The slab then went from a bungalow in the village of Whiteparish to an archaeologist. Accompanying the wreath is a message from the area’s ancient past: “the people (and) the Young Men (honour) Demetrios (son) of Metrodoros (the son) of Leukios.”

Names aside, how did this precious chunk of history come to be resting in a rockery? The answer may lie further along from the Roman era.

Woolley and Wallis describe the item as a “Grand Tour relic”. Now associated with the globe-trotting exploits of presenter Jeremy Clarkson and pals, the original Grand Tours of the 17th/18th centuries were on a much grander scale.

Quoted on the Woolley and Wallis site, Antiquities specialist Will Hobbs says: “wealthy aristocrats would tour Europe learning about Classical art and culture”. So the thinking is the slab was possibly brought back from Greece or Asia Minor by a thrill-seeking toff. 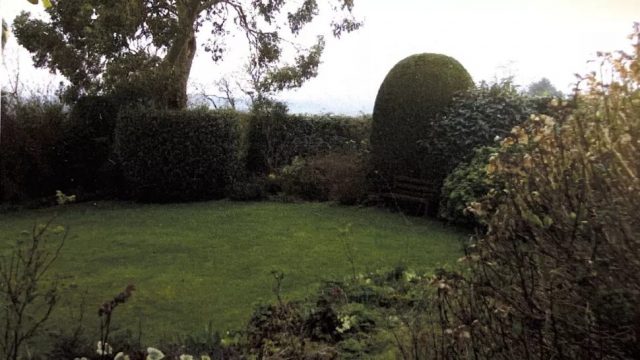 The artefact was dug up from an old rockery in the garden (pictured) of a bungalow home in the village of Whiteparish, Wiltshire, England. Credit: www.woolleyandwallis.co.uk

These educational jaunts were intended to drill information into young minds. Travelers fresh from Oxbridge and other institutions were male and around 21 years of age.

The journeys, or cash splashing rites of passage, could take years to complete. Writing in 2008 for the New York Times, travel journalist Matt Gross commented the men “commissioned paintings, perfected their language skills and mingled with the upper crust of the Continent.”

The tours apparently lasted between 1660 – 1840 approx. When accessible modes of transport burst on the scene – opening up the world’s wonders in an affordable way – the old-fashioned idea of a Grand Tour faded into history. Plus the neo-classical sights were reportedly losing their lustre in fashionable circles.

Part of the puzzle seems to be complete. Though as Hobbs adds, “what is a complete mystery is how it ended up in a domestic garden”.

Whiteparish’s development over the decades is being explored for further clues. As stated by Woolley and Wallis, the bungalow went up during the 1960s. Might someone around at the time know where the material originated from?

Research shows that nearby country piles Cowesfield House and Broxmore House were torn down in the late 1940s. It’s possible the rubble that went to the bungalow came from these lofty locations.

A call has been put out to the public, in the hopes that gaps might be filled before the slab goes under the hammer.

The Wiltshire Council website mentions fascinating details of Roman activity in the area. The team note it is “possible that there was late Roman occupation in Whiteparish and Cowesfield as pottery and 4th century coins have been found in gardens and fields there.”

Coronavirus halted auctions planned in Salisbury for early 2021. Current projections are the slab will be sold in the Spring.

It’s likely the engraved artifact arrived on English shores via a Grand Tour. Yet the possibilities ancient history offers are practically boundless. Sometimes it takes the simple act of digging up a garden to unlock mysteries from thousands of years past…