A chunk of moon rock nearly 4 billion years old is now sitting on a shelf in the Oval Office.

How come? 46th US President Joe Biden has adjusted the White House decor, as with any new tenant during a move. The lunar display, presented in a futuristic-looking glass case, is there at his request. It was brought over on January 20th.

Collected by NASA astronauts in 1972, the 3.9 billion year old space artifact is labelled as sample 76015,143. While this doesn’t trip off the tongue, it represents a dramatic galactic development.

As Popular Mechanics puts it, the rock sample is part of an “impact melt breccia” which “tells the catastrophic tale of the last great asteroid impact on the near side of the moon.” (Appropriately enough, the Apollo 17 mission was NASA’s last to the lunar surface.) 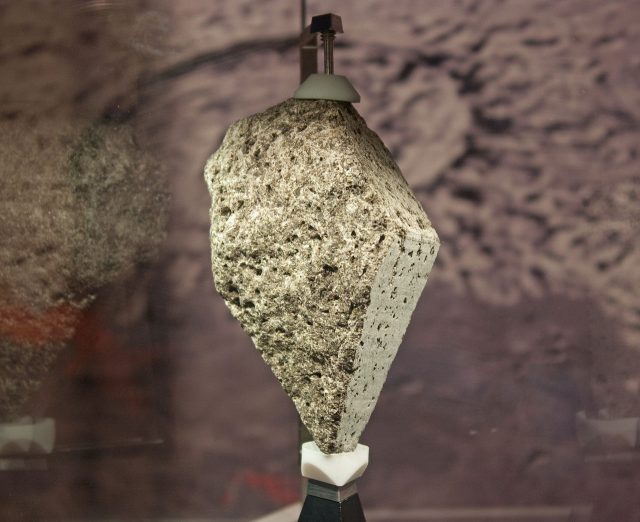 This example of Olivine basalt collected by the crew of Apollo 15. Credit: Wknight94 – CC BY-SA 3.0

The result of this collision was the Imbrium Impact Basin, measuring over 700 miles in diameter as measured by the agency. Energy generated by the asteroid crash landing was powerful enough to liquefy the landscape, putting the melt in “impact melt breccia”.

Ronald Evans, Eugene Cernan and Harrison Schmitt were aboard for that legendary trip. Geologist Schmitt reportedly spotted the boulder the sample comes from, formed by the ancient asteroid strike, some 2 miles from their module.

CNN writes it was “a mangled amalgam of crushed sediment and once-molten matter” and that Schmitt “saw it glinting in starlight.”

The boulder rested at the bottom of the North Massif – or mountain – in an area called Station 6. Apollo’s crew broke off a section and brought it back to Earth. The story is inscribed on the casing.

Its next destination was the Johnson Space Center in Texas. The flat side on Biden’s rock shows where scientists cut through the material to examine it, making this White House display a fragment of a fragment. The weight is a reported 332 g.

Visible on the sample’s surface are little craters. These are where “micrometeorite impacts have sand-blasted the rock over millions of years”, according to EarthSky. Fast-moving dust takes its toll on the hardest materials, owing to the Moon’s famous lack of atmosphere. 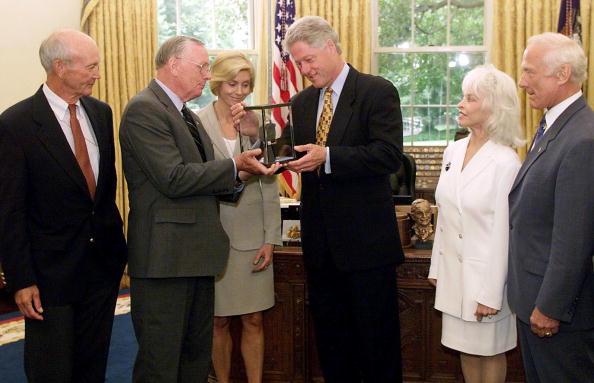 WASHINGTON, : US President Bill Clinton (C) is presented a rock from the moon by the original crew of Apollo 11 (L-R) Michael Collins, Neil Armstrong and his wife Carol Armstrong, Lois Aldrin and Buzz Aldrin 20 July, 1999, in the Oval office.  TIM SLOAN/AFP via Getty Images.

Earth-shattering evidence such as this can help teams understand the lunar environment and how it’s evolved over the centuries in response to internal and external forces.

So, it’s safe to say the rock is more than just a cosmic ornament for the Oval Office. But it appears to have a patriotic meaning also.

The choice is designed to promote the idea of America blasting off into the future, both with America’s space agency and its general direction of travel as a country.

An opinion piece for CNN calls it a “symbol of the new President’s science-driven agenda”.

Popular Mechanics highlights the significance of the Apollo mission date – December 1972. During that month President Biden’s first wife Neilia and their daughter Naomi were tragically killed in a car accident.

The rock takes its place on a bookshelf with other talking points. These are
“items intended to remind Americans of the ambition and accomplishments of earlier generations” according to the Daily Mail.

Hopes for the future of US space exploration lie in the Artemis program, announced in 2019 long before fears of a pandemic set in. Originally aiming for a 2024 date, the mission looks to land men and women on the Moon for the first time in decades.

Various outlets point out previous instances of Moon rock in the Oval Office. President Clinton welcomed a sample from the iconic Apollo 11 mission of 1969. Pioneers Neil Armstrong, Buzz Aldrin and Michael Collins dropped by the White House to deliver it 30 years later.

Another Article From Us: Unknown Space Object is Actually a Booster Rocket From 1960s Says NASA

These mementos are on loan to the President, so will have to be returned at some point. While they’re there however, they should inspire the population to look skyward and think about a future beyond Covid and other Earth-bound problems…