An ancient brewery that produced a sea of beer has been found in the former city of Abydos, Upper Egypt.

Beer o’clock was taken seriously back then! Archaeologists from Egypt and America were exploring the necropolis in North Abydos when they uncovered the industrial scale site from approx 5,000 years ago.

News was broken by the Ministry of Tourism and Antiquities earlier in the month.
Their Facebook statement refers to the location as the “oldest high-production brewery in the world”.

Situated to the south of another urban center Sohag, the brewery “is thought to have been produced on a large scale, with about 22,400 litres (5,000 gallons) made at a time” report BBC News.

Speaking to CBS News, Dr Matthew Adams of New York University revealed this was “enough to give every person in a 40,000-seat sports stadium a pint”. 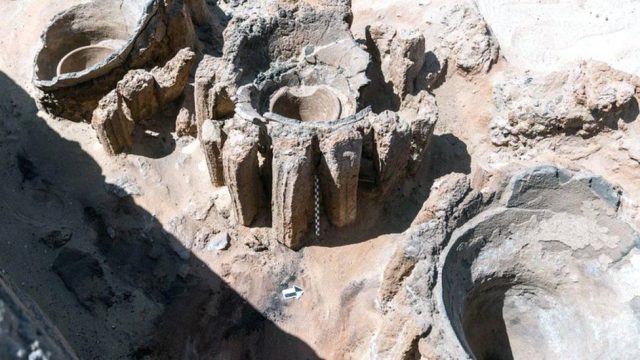 Within the facility, experts found 8 areas measuring 65 ft in length. Inside each of these were 40 clay vessels organized in 2 rows per section.

Here workers “would have heated grains and water in the vats, which were held in place by clay levers” according to Smithsonian Magazine.

This ties in with initial impressions about the site made by English Egyptologist T. Eric Peet, who around a hundred years ago reported evidence of grains being dried but nothing in the way of alcohol production. In an age before instant verification, the brewery location was lost till 2018.

Archaeologists Adams and Dr Deborah Fishak (Princeton University) picked up where Peet left off, expanding his discovery. Smithsonian Magazine reports that magnetic survey technology was used to pinpoint the site.

So what was all this booze being used for? Consumption clearly, but by who? The brewery is believed to hail from the time of King Narmer, who lived during the Early Dynastic Period (3150 AD).

Narmer is widely thought to be the first pharaoh. He apparently unified Egypt, giving rise to the First Dynasty. While an important figure, there was an even grander presence in ancient times that needed to be considered… the dead!

Beer produced would have been offered to higher powers, according to current thinking. The Ministry of Tourism and Antiquities writes, “Evidence for the use of beer in sacrificial rites was found during excavations in these facilities.” 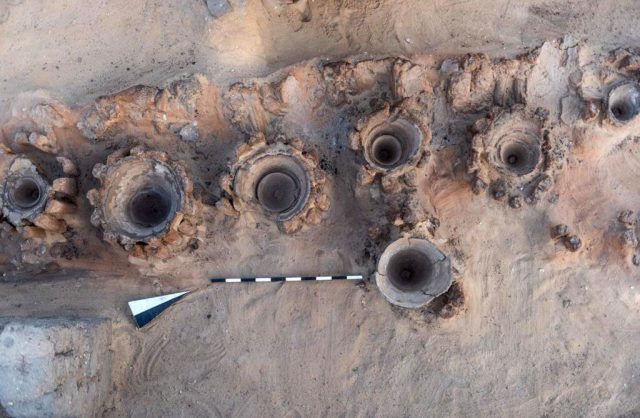 The brewery uncovered in North Abydos likely dates back to the era of King Narmer, founder of the First Dynasty who ruled more than 5,000 years ago. Credit: Egyptian Ministry of Tourism and Antiquities

The status of the site as a funerary area suggests the boundary between one world and another was never stronger than here. Abydos is a place where many Kings and people of note were laid to rest.

Smithsonian Magazine writes that Khenti-Imentiu, the jackal god, was worshipped in the necropolis. The cult of Osiris then conducted their business at the location. Rituals and sacrifices were very much a way of life.

Beer was singularly refreshing, even for the deceased. The British Museum Blog writes the Ancient Egyptian brew “was so essential it was treated principally as a type of food – it was consumed daily and in great quantities at religious festivals and celebrations.”

The world’s oldest “payslip” – or, to be more accurate, a cuneiform tablet from 3,000 BC – detailed a beer tally. Seems workers were paid in it.

Ancient Egypt is home to the mighty pyramids. These epic structures required plenty of laborers, undertaking a construction process that’s still a mystery to this day. However they did it, the job would have been thirsty work. Arguably the thirstiest work in history!

As numerous stories show, Egypt’s heritage is well and truly in the spotlight. Find after find has provided much-needed coverage of its legendary past. With the pandemic cutting off travel links, revelations at sites such as the Saqqara Tomb have captured the public’s imagination.

Recently mummies were found with gold tongues. Located at the ancient city of Taposiris Magna in Western Alexandria, these bodies were supplied with glittering additions in order to help individuals breathe, consume and communicate effectively in the afterlife.

Another Article From Us: Archaeologists Unearth Viking Drinking Hall on Scottish Island

If this brewery is anything to go by, the beer would have flowed on the other side. If someone can’t have a well-earned drink after their death, when can they…?