Viking life: Located on a narrow strip of land that divides the loch of Harray and the loch of Stenness is the Heart of Neolithic Orkney World Heritage Site in Orkney, Scotland.

Excavations have been conducted by the University of the Highlands and Islands Archaeology Institute’s project which began in 2005 and continues on to this year.

According to archaeologyorkney.com, the site, originally found in 2013, offers a glimpse of life from the Mesolithic Age on down to the Iron Age with evidence of over five thousand years of human activity. 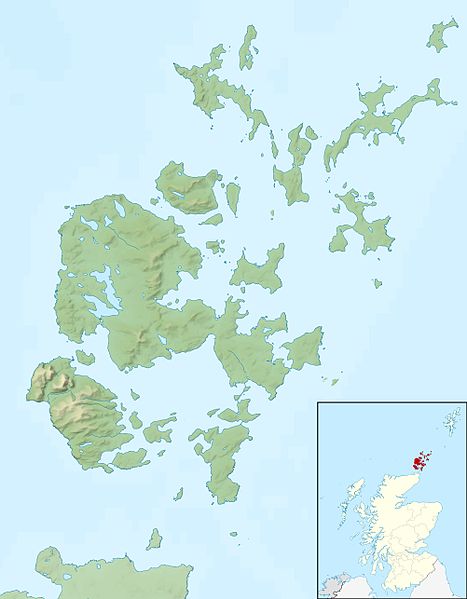 Map of the Orkney islands at the northern tip of Scotland where the viking hall was found,  Contains Ordnance Survey data © Crown copyright and database right CC by SA-3.0

It was generally accepted that humans began to occupy Scotland about 6000 BC about the middle of the Mesolithic Age but recent discoveries of specific arrowheads in the style used in northern Europe and southern Scandinavia between thirteen thousand and nine thousand years ago indicate that humans populated the area of Orkney back to 11000 BC during the Paleolithic period.

Not much evidence during this period was left due to the fact that the humans in the region were nomadic hunter- gatherers who followed the seasons and the accessibility of food.

A burnt hazelnut shell found in 2007 was carbon dated to 6820-6660 BC proving humans were in the Orkney East Mainland probably since at least 7000 BC. In 2019 three Mesolithic microliths – flints used in the production of tools were unearthed. 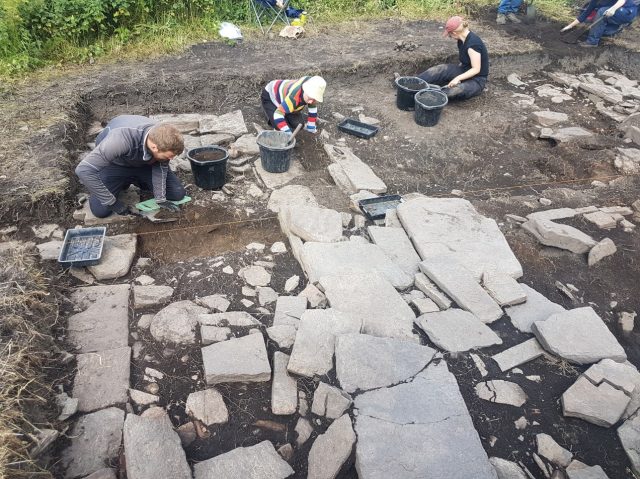 The Neolithic period was especially active as the hunter-gatherers turned to farming about 3700 BC. On the island of Papa Westray, the Knap of Howar – a stone Neolithic house dated to around 3600 BC has been unearthed and is now declared one of the oldest standing building in northern Europe.

Hunting and gathering native foods still went on but the inhabitants stayed in order to tend their crops. As the small civilization grew, they left behind the normal trappings of life including structures, monuments and cemeteries.

There were two phases of the Neolithic period in Orkney according to the styles of pottery and buildings. During the early phase ceramic styles included round bottoms transitioning to grooved decoration in the later period.

Cairns, man made piles of stones usually used as a burial marker became chambered with rooms and tunnels built with rocks for multiple burials and rituals. While cairns are found all over Europe, the group found in Orkney are the largest and most elaborate with diverse styles.

The foundation of what may have been a drinking hall was found in 2019 at Skaill Farmstead in Westness, Rousay in the area of Orkney.

It is believed to be from the tenth century due to the artifacts of benches, pottery and a piece of a Norse bone comb. Stone walls were found about eighteen feet apart and almost forty three feet long with stone benches along the interior walls. A more recent find, pieces of a clay pot impressed with the image of a woven textile were found in 2020.

It is assumed to be the design of the clothing worn by the potter as he leaned over the pot while it was still wet. The exceptional find was discovered during an examination of a pot shard using Reflectance Transformation Imaging by Jan Blatchford and Roy Towers of the Archaeology Institute of the University of the Highlands and Islands.

The Bronze Age didn’t produce many artifacts in Orkney leading to question as to why. Did the people reject the new metalwork from the European continent or were there other factors as to why so little was found? Axe heads are some of the few metal artifacts but less than twenty bronze artifacts have been discovered.

The Iron Age produced defensive strongholds called brochs indicating conflict may have plagued the area or they may have been built to show off the owner’s wealth or prestige.

The brochs not only towered as far as forty feet but many had broch “wells” or underground chambers dug deep under the rock formations.

Another Article From Us: Turns out the Irish have more Viking in them than Previously Thought

Some archeologists believe that they were actual wells but others think they may have been used as ritual locations. There were many metalworking sites around Orkney and trade was demonstrated by the Roman artifacts found in several places.