Bizarre Species Recently Found May Tell The Ancestry Of Jellyfish

About ten years ago a fossil was found in southern China’s Yunnan Province which had a round body, taken up mostly by the creature’s mouth, surrounded by eighteen hairy legs.

No, it was not a spider but a sea creature which lived five hundred and eighteen million years ago and may have been an ancestor of the comb jelly still found in oceans around the world.

Most animals have some sort of ciliary structures but those on the Daihua sanqiong and comb jellies are the largest presently known. According to businessinsider.com, comb jellies have eight combs of fused cilia which undulate in synchrony to move about in the water. Their cilia are about two millimeters long, the longest currently known. 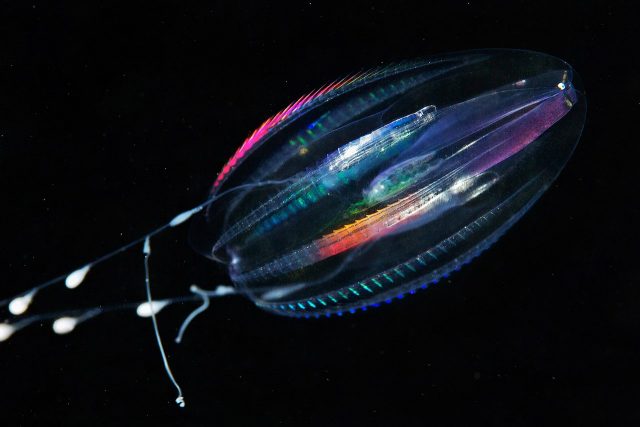 Comb jellies control their movement by rapidly moving cilia (know as combs) on their bodies. The fossil appears to have the same cilia, indicated it may be related. Image credit: Alexander Semenov CC BY-SA 4.0

Paleobiologist Jakob Vinther from University of Bristol in the United Kingdom spotted the fossil while visiting Yunnan University’s paleobiology laboratory. He has since co-authored a study found at cell.com where he and other scientists hypothesize either a close relationship or ancestral relationship between the two jellies.

Not much is known about the ancestry of comb jellies and some believe they were the first animals to inhabit the oceans. According to Vinther, “We showed comb jellies originated from weird and wonderful ancestors. Comb jellies are still bizarre as hell, but now we can explain it.”

Other scientists don’t necessarily agree with Vinther. According to usatoday.com, Monterey Bay Aquarium biologist, Steven Haddock, remarked, “To those familiar with modern comb jellies, the purported correspondence with (these) fossils is…fanciful.” 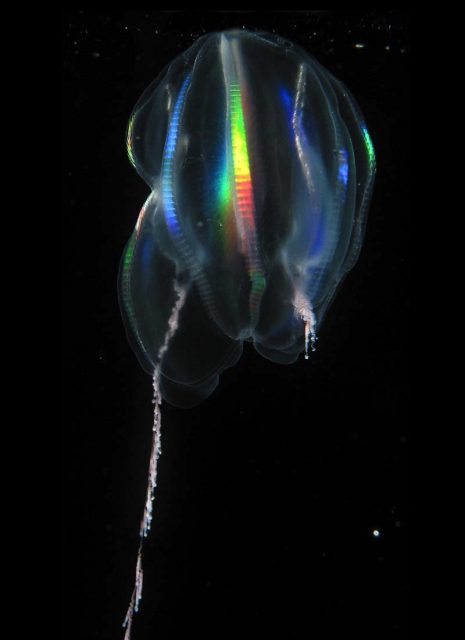 Light diffracting along the comb rows of a comb jelly.

Yale University professor of ecology and evolutionary biology, Casey Dunn remarked on sciencealert.com, “It’s hard to say whether this ancient creature is part of the lineage that produced comb jellies. I am highly skeptical of the conclusions they draw.”

Undeterred, Vinther claims the tentacles are the same as are found on coral and sea anemones and welcomes the opportunity to debate with other scientists.

Ocean.si.edu tells us all jellyfish belong to the family Cnidaria which also includes sea anemones and coral among many others. Of the over ten thousand species only four thousand are jellyfish. Some jellyfish species are considered invasive as they are so adaptable to changing conditions. The most familiar group is Scyphozoa, known to be the most common jellyfish of which there are about two hundred species.

Hydrozoa are usually found near the surface where they are very small or at the bottom of the sea where they can grow to over one hundred and sixty four feet such as the Portuguese Man o’ Wars. A new species was found deep in the Mariana Trench in 2016 and was added to the almost four thousand other species of Hydrozoa.

Stalked jellyfish, in the Staurozoan group, don’t swim but attach themselves to rocks and seaweed. They look similar to a piece of broccoli cut lengthwise and live in colder water. There are about fifty species in this group and can be very colorful.

Cubozoan jellyfish are boxed shape and have the most developed nervous systems of all of the species. They also have eyes that are much more developed with corneas and retinas and are poisonous to humans. At least thirty six species are found in this group. 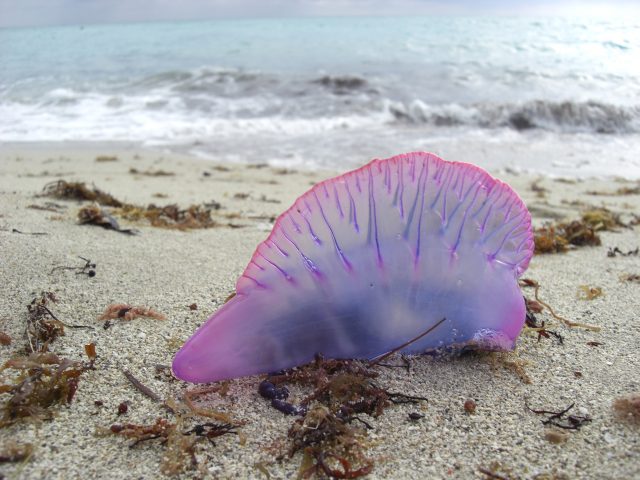 There are fewer species of comb jellyfish with only about one hundred and fifty known. The group Cydippida have rounded bodies and their tentacles can be pulled up into their bodies near their mouths.

Another Article From Us: ‘Pile of Rope’ on a US Beach is a Strange, Real-Life Sea Creature

Beroids have no tentacles but can snap their large mouths closed when unfortunate prey swim in. Lobates have two flat lobes that extend below their mouths and have short tentacles. Most of the comb jellyfish are found close to shore but there are some that live in the open ocean which are so delicate they can’t be collected safely.

« With It’s Own Castle, Scottish Island Yours For $112,000
Mansion Reportedly Used by Henry VIII & Anne Boleyn On Sale for $4 million »