Swinging a metal detector back and forth over sandy beaches or grassy fields is a popular pastime in Britain, and in fact all around the United Kingdom.

The nation is so rich and long in history that plenty of folks enjoy spending their down time looking to see if they can come upon relics, artifacts and other treasures that may be historically significant, monetarily valuable, or both.

Last August, Jay Cornick, an electrical engineer and enthusiastic detectorist, as those with this hobby are called in Britain, made a discovery that thrilled everyone involved in the U.K.’s world of archaeology – a 13-inch spearhead.

Cornick was strolling along a beach on the east side of the isle of Jersey, moving his metal detector back and forth, when the machine gave him the signal that something meaningful was nearby.

A little digging and a lot of pulling later, Cornick had in his hand a complete spearhead from the Bronze Age, which in Britain began about 2000 B.C. and lasted for 1,500 years. 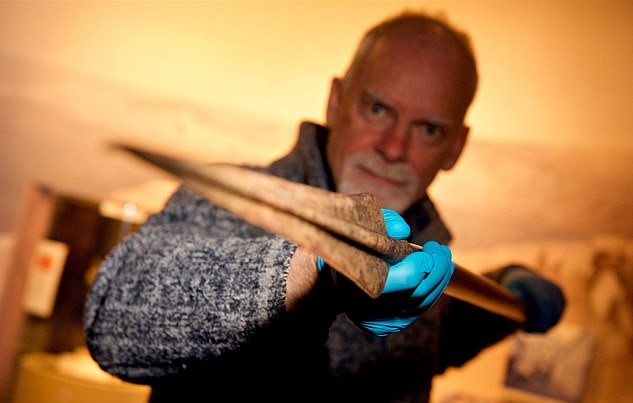 He immediately took the surprising, and important find to Jersey Heritage, and experts began the process of carbon dating the spear to learn just how old it is. It is, they say, about 3,000 years old.

“The spearhead is completely different from everything else we have,” enthused Olga Finch, curator of archaeology at Jersey Heritage. She added, “The spear is a really exciting find for Jersey – it is unique and very rare in terms of its large size and the fact that it is intact.”

Another staff member who worked on cleaning the piece before it went on display said it was “incredible” to have such an intact relic in the collection now.

Bronze is a combination of copper and tin, the latter metal only about 10 percent of the mix. The material was brought to Britain, historians and archaeologists say, from various places in Europe during the Bronze Age.

Citizens and military officials were using quite sophisticated weapons, pots and tools made of copper, bronze and other metals, and many were disposed of either accidentally or by design in the Britain.

Finch said that the spearhead from Jersey was likely buried deliberately, as its point was shoved straight down into the dark sand on the beach.

That material – sand – protected the weapon from the elements, which is why the spear is in such remarkably good shape, with relatively few signs of the many centuries that have passed since its placement.

Finch and others are positing that, because the spearhead is so unusual and unlike anything else in their collection, it may have been used in a sacred ritual of some type, and buried as part of that rite. For now, these experts are just not certain.

They are, however, extremely glad to have it now on display at the Jersey Museum & art Gallery for everyone to see and enjoy.

Scouring the landscape for buried treasures can be a rewarding hobby in the U.K., and there are many enthusiastic practitioners of it. Often people find troves of rare coins, dating back as far as the Romans, as well as artifacts like the spearhead, other weapons, tools and utensils. 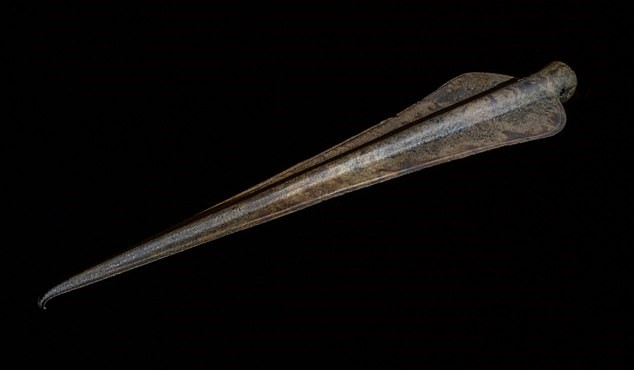 The large size of this spearhead has confused experts, who so far are considering it may have been a significant object in religious cermonies. Image credit – Jersey Heritage

Most people gladly turn these rare finds over to specialists at museums and archaeology facilities, experts who can properly date them and assess their value. When that happens, the individual who made the discovery is financially rewarded by the government for being honest about their finds, so everybody wins.

Britain goes back so many centuries that it’s as though there is another world, or the remnants of it at least, just beneath the soil all around the country. Finding these treasures is enormously satisfying, for the treasure seekers, the experts, and the academics and historians who get involved in the process.

Another Article From Us: Mansion Reportedly Used by Henry VIII & Anne Boleyn On Sale for $4 million

And, of course, for the public, who get to see and learn what Britain’s history is comprised of when the artifacts go on display in public spaces.

« The Fascinating Ancient City Excavated… by Radar!
These Ghostly Photos are Historical Eye-Openers »