Warriors buried in Scandinavia had a tough life… but a surprisingly comfortable death! “Boat graves” unearthed in Sweden reveal soft feather bedding formed part of an individual’s voyage to the next world.

Close to 100 Iron Age graves are to be found at Valsgärde, a site within range of Uppsala city. Experts exploring a couple of these 7th century resting places noticed layers of downy bedding, coming off multiple birds.

Alongside the expected eider duck – where “eiderdown” comes from – are feathers plucked from geese, grouse and sparrows among others.

According to a report for the Journal of Archaeological Science, available via Science Direct, a “microscopic analysis of the ancient feathers” identified the birds in question.

CNN report that particular areas were zoomed in on to establish each species. To confirm the findings, comparisons were then made “with avian bones in the two burials and from a contemporary farm close to the burials.” 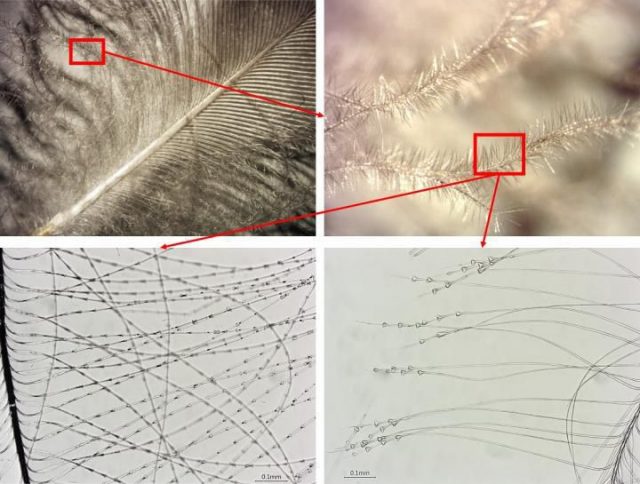 The researchers were able to identify which species of bird the feathers came from by looking at them up close. Image credit – NTNU University Museum

The Norwegian University of Science and Technology reveal in a statement that chickens, pigeons, owls and further feathered friends “prolong the death struggle.” Scandinavian legend dictates goose feathers are “best to enable the soul to be released from the body.”

On a less serene note, the decapitated remains of an eagle owl were recovered. Report co-author Birgitta Berglund thinks the creature’s fate “had a ritual significance in connection with the burial”.

As noted by Smithsonian Magazine, the unfortunate owl may have been a huntsman’s companion. Did this tie in with ideas about preventing the dead from rising? They write its violent end “may have been a way to ensure that it could not return from the dead and perhaps be used as a weapon by the dead warrior.”

While an owl as a weapon is an image to conjure with, a Viking with a sword is more familiar. Smithsonian Magazine mention the presence of bent blades in their graves – a possible move to de-escalate Viking zombie attacks?

Measuring approx 10 m in length, the vessels also contain oars, weapons and general provisions. As with the legendary find over in Sutton Hoo England, the burials appear to be high status. Berglund refers to Netflix’s dramatized account ‘The Dig’ to give readers a context for this latest discovery.

The authors’ statement places the graves in the mid-Merovingian period. Berglund’s fellow feather fan Jørgen Rosvold talks about the rough side of such a fluffy find. Soft bedding sounds nice but after hundreds of years the condition is far from restful. The scene took time to study due to the tangled mess that awaited them.

Aside from showing what birds were around back then, the graves shine a light on ancient trade. One burning question is whether the feathers were brought in from overseas, or found on the doorstep? Or at least chirping in the nearest tree. 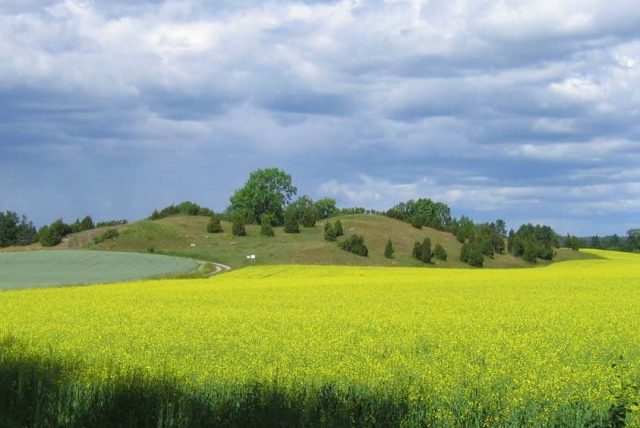 The grave field of Valsgärde. Image credit – I, Berig CC BY 2.5

In terms of feathery history, Ancient Greece and Rome are known to have stuffed their beds with down. Berglund points out in various outlets that Europe didn’t experience the same effect till the Middle Ages. And it was quite a luxury.

A deeper meaning for the feathers is far from established. However there’s enough to go on for Berglund and Rosvold to make some educated guesses. It stands to reason that a trip to the afterlife needed some serious symbolism, thus ensuring the grave’s occupant reached their otherworldly destination as securely as possible.

Interestingly, an eiderdown is considered par for the course today, a staple feature of any hotel or guest bedroom. Yet in those days it may have represented something altogether loftier.

Another Article From Us: A Sheep In Super Heavy Clothing! 80 Pounds Of Pure Wool Burden Lone Creature

Archaeologists, academics and maybe even insomniacs will no doubt want to learn more about the ancient art of comfort…