This sinister engraving is inlaid with “traces of white enamel”, according to the Daily Mail. Surrounding the skull is a Latin inscription: “Memento Mori”. Translating as “Remember you must die”, it’s surely the most powerful reminder ever! The ring was found at Carreghofa, Powys.

Wales Online quotes National Museum Wales’ Deputy Head of Collections and Research Dr Mark Redknap. He states the ring and its message “reflects the high mortality of the period, the motif and inscription acknowledging the brevity and vanities of life.”

Not that things should get too morbid. In their coverage, Ancient Origins notes the ring was made “to honor the passing of a loved one.”

Dated to between 1550 – 1650 the ring sits among 8 other gold and silver finds, ranging in age from medieval times onward. The assumption is these items belonged to the well-to-do of Wales. 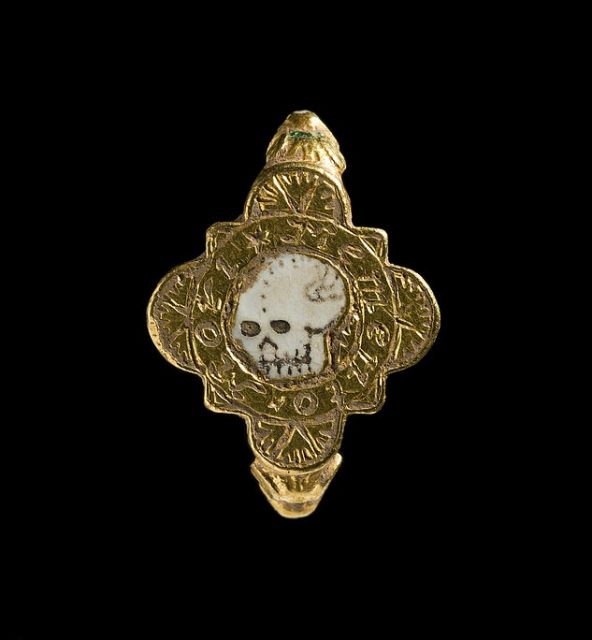 As for who discovered this amazing collection over the years, their identity is more down to earth so to speak. The treasure was found and dug up by metal detectorists, including ring spotter David Balfour.

The status of the finds meant authorities had to be consulted. According to Wales Online, objects deemed as treasure must be taken to the National Museum for verification and analysis. The site reports that South Wales Central Assistant Coroner Thomas Atherton officially categorized the discoveries. So, those thinking of pocketing the loot and selling it on for a hefty price are probably out of luck!

The haul has had interest from various parties. If it was up to the National Museum they would display the ring in their collection, as reported by the Mail.

Meanwhile, Brecon’s Y Gaer Museum is looking into acquiring a trio of gold coins from medieval times. Detected by Chris Perkins and Shawn Hendry in 2019, the Mail writes they represent a whopping 50 days’ pay, or 20 shillings. They appear to have been committed to the earth in the late 14th century, possibly for safekeeping.

Another attention-grabbing item is a double-hooked fastener or clasp in an Anglo Saxon style. A first of its kind for Wales, according to the Mail.

There’s also another ring, described as a posy ring by Ancient Origins. “Posy” means “short rhyme”. In this case an engraving reads “Be Constant to the End”. As reported, the ring is thought to come from either the late 17th or early 18th century.

The site also mentions a silver medallion unearthed in Brecon. Bearing a profile of Charles I, it carries the message “Shame on him who thinks evil of it”. Otherwise known as the Order of the Garter, the same words can be seen on the Royal Coat of Arms.

The presence of some mystical-looking rings has inevitably led to comparisons with the ‘Lord Of The Rings’ franchise. Coincidentally, Middle Earth creator J.R.R. Tolkien was inspired by Welsh language and culture when realizing his enduring literary classics. 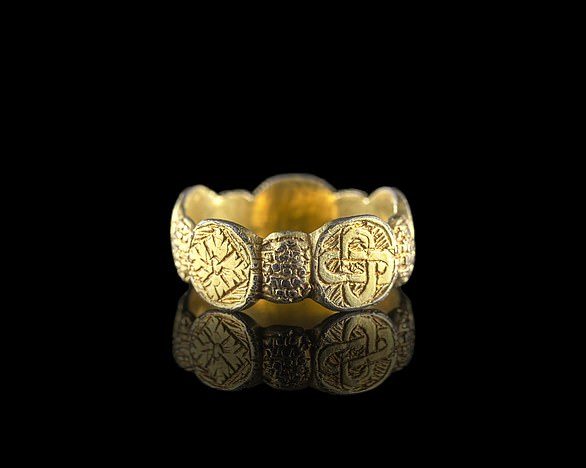 Among the remainder of these precious finds are a silver bar-mount from medieval times and a silver annular broach from the same period. There are assorted coin hoards of both silver and gold. The vast majority of the finds come from Powys, with the rest located in the Vale of Glamorgan.

The implications for learning more about the country’s ancient past are immense. Not only does the haul give historians further understanding of how death was approached, it helps bring the long-forgotten past to life.

Another Article From Us: A Sheep In Super Heavy Clothing! 80 Pounds Of Pure Wool Burden Lone Creature

With the world gripped by a pandemic and uncertainty rife, numerous countries are embracing archaeological riches as a means of celebrating their identity. This handsome find may go some way to reinforcing national pride…

« Ancient Warriors Buried with ‘Luxury’ Bedding
Ancient Chinese Duke Loved Horses so was Buried with Them… Hundreds of Them! »