Ancient Chinese Duke Loved Horses so was Buried with Them… Hundreds of Them!

A Chinese Duke enjoyed the company of horses so much he was practically buried alongside them!

Some 600 young steeds are believed to be part of Duke Jing of Qi’s epic tomb, located in Linzi District of Zibo, Shandong Province.

Only a portion of that equine estimate has been uncovered so far. The period spent excavating the Duke’s resting place and surrounding features is a long and interrupted one.

These animals were first discovered in 1964, with the Duke’s tomb itself coming to light in 1976 – more on this later.

How do people know it’s the Duke’s tomb? A New York Times piece from 1986 mentioned stone chimes, bearing inscriptions that pointed to the revered occupant.

The horses have their own separate area, which flanks part of the Duke’s tomb on 3 sides wrote Ancient Origins in 2019. Initially a staggering 145 horses were discovered in a pit to the north, at a length of 215 meters. 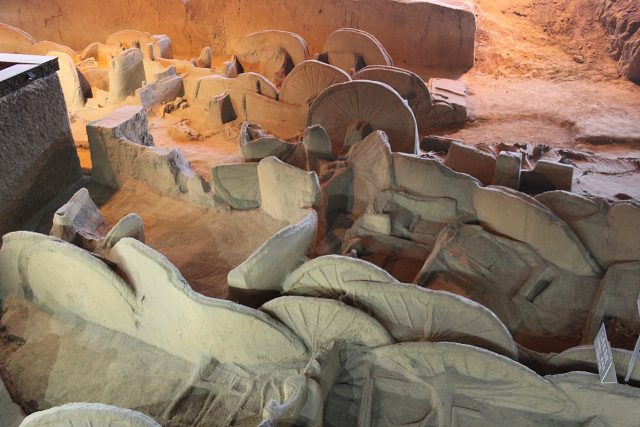 Chariots from the Guo State Tombs. This were from the era of which Duke Jing of Qi reigned.

Another hundred or so would be found in later years. Dead horses have been exposed to the east and west, according to China Daily, reporting in 2005.

How does one go about laying hundreds of apple munchers to rest? There was little restful about it apparently. The horses were sacrificed for their master, given alcohol to dose them up before being brutally dispatched.

China Daily reported in 2005 that their skulls were broken, suggesting the use of blunt implements. In a surprising development to modern eyes, the people who raised the steeds also found themselves meeting their maker.

Post-sacrifice, the horses were carefully placed in 2 lines. Furthermore, the skeletons appear to be arranged in action poses, “ready to rush into a war at any time once the battle drums are beaten” as observed by China Daily.

Aside from a personal interest from Duke Jing of Qi, horses played a significant role in ancient Chinese culture. Not only vital for agriculture, they pulled the chariots that bolstered military might. China Daily noted these legendary war vehicles were a “major index to measure a country’s competitiveness”.

The Duke was given this noble title after his demise. Ancient Origins wrote his mother was concubine to the powerful Duke Ling of Qi.

The figure who became known as Duke Jing rose to prominence around 576 BC, following the death of half brother Duke Zhuang. He’d been killed after starting an affair with the wrong person’s wife.

Together with new Prime Minister Yan Ying, the Duke is believed to have reigned over a relatively stable period for the area. However, there was controversy in some circles when he appointed youngest son Prince Tu as his successor. Duke Jing died in 490 BC. His chosen one didn’t last, perishing in a coup.

For such a huge structure, it took some finding. It wasn’t till 1976 that the tomb was finally explored by archaeologists. The discovery is thanks to a humble peasant. As written by the Times, he’d spotted some bronze pieces in a field. When approaching the history hounds, he apparently thought them treasure hunters. 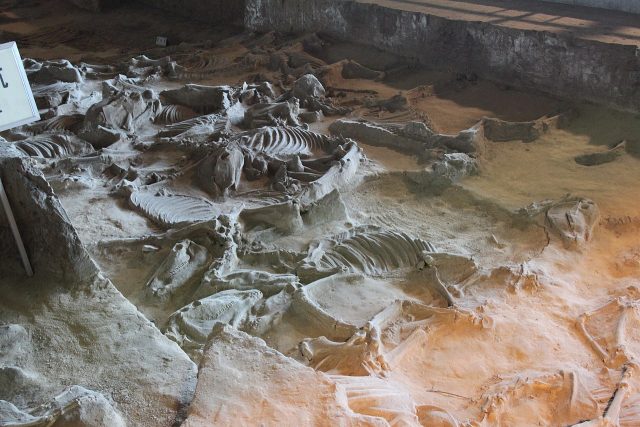 These horses were buried in the Guo State Tombs during the Spring and Autumn Period.

Ancient Origins wrote experts were “hoping to learn more secrets about the burial, history, and scale of the army in the pre-Qin period.” It is unclear how the pandemic has affected progress.

The Xinhua News Agency reported in 2004 that a “dozen elegantly cast iron shovels found in the tomb show the highly developed iron-smelting techniques of the Qin State in ancient north China.” Thousands of artifacts were found in the initial investigations.

Another Article From Us: Ancient Warriors Buried with ‘Luxury’ Bedding

Incredible though the sight of hundreds of horse skeletons is, it forms only part of a much bigger picture. Duke Jing’s tomb represents a dynasty that still speaks, centuries on from its existence…