Michael Collins, the American astronaut who journeyed to the moon with Neil Armstrong and Buzz Aldrin, has passed away aged 90. He was suffering from cancer.

The iconic Apollo 11 mission of 1969 made the lunar surface its destination. But someone had to stay behind and pilot the Columbia module. That role was famously filled by Collins, who became known — rightly or wrongly — as “the loneliest man in history.”

From his position 60-odd miles over Armstrong and Aldrin’s heads, he saw the Earth eclipsed by the as-yet-unexplored satellite. It gave him a perspective on life only a few have experienced.

A quarter of a million miles away lay Italy, the country of his birth. His father, Army Major General James Lawton Collins, was a military attaché in Europe at the time in 1930. His mother was Virginia Collins.

As reported by The Washington Post, Collins Sr. worked as aide-de-camp to Gen. John J. Pershing, who commanded American Expeditionary Forces during the First World War. Safe to say, the young Collins had a lot to live up to. His was very much a military family.

Graduating from the United States Military Academy at West Point, he first reached the heavens as a pilot. The Post notes he had no relatives in the Air Force.

Inspired by John Glenn’s 1962 solo orbit, he decided to literally reach for the stars. Collins applied for and joined NASA in 1963. Three years later, he was part of the Gemini 10 mission, on his first journey beyond Earth’s atmosphere. Whilst up there, he became the third American to take a spacewalk.

Apollo 11 is one of the defining moments of US history. Tensions were evident, yet Collins was known for his “quiet and unassuming nature” as described by NBC. The Post writes he was “reserved and levelheaded” but revealed “flashes of wry wit.”

Interviewed by NASA in 2009, he summed up his career as “10 percent shrewd planning and 90 percent blind luck.” Collins could have missed out on Apollo 11 due to a slipped disk. Thankfully, he managed to overcome this and blast off.

Naturally, he experienced anxiety. A quote from his memoir Catching the Fire: An Astronaut’s Journey (1974) shows how the pressure mounted: “My secret terror for the last six months has been leaving them on the moon and returning to Earth alone.”

Not that he had time to ponder too heavily. According to the Post, he was kept company by a 117-page contingency list.

He coped with post-lunar life better than most. The Post writes that as “Armstrong turned reclusive and Aldrin struggled with alcoholism, Mr. Collins thrived outside the glare of publicity.”

Keeping busy, Collins went on to become the third director of the National Air and Space Museum. He worked at the Smithsonian Institution as an undersecretary. The State Department and the aerospace industry also opened their doors to him.

He left NASA in 1970, moving to the Air Force Reserve. The agency had plans for the relatively young astronaut. But as far as he was concerned, he’d been there and done that. Now Major General Collins stood down from the Reserve in 1982.

Authoring various books, he also made an impression onscreen. Collins spoke about his experiences in the documentary In the Shadow of the Moon (2007). Two years later, he acted in the Michael Cera comedy-drama Youth In Revolt. 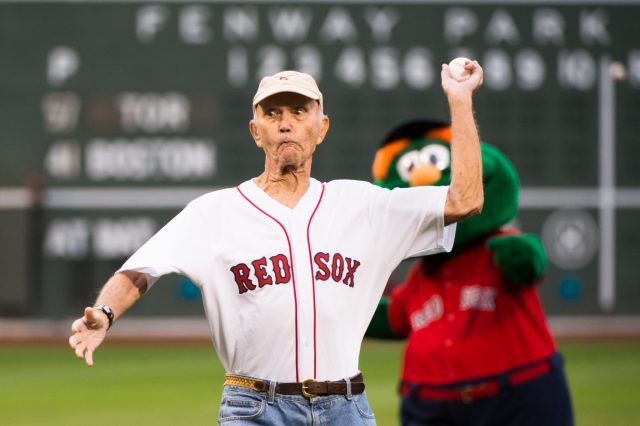 Collins has been portrayed in both movies and TV. Most recently, he featured as a character in Netflix’s The Crown. Played by Andrew Lee-Potts, the younger Collins was granted an audience with Prince Philip. He too passed away this month.

Following Apollo 11, Collins received the Presidential Medal of Freedom. Other honors include the Air Force Distinguished Flying Cross, the NASA Distinguished Service Medal, and the Legion of Merit.

In 1957, he married Patricia Finnegan. She passed away in 2014. He leaves behind two children and seven grandchildren. Son Michael L. Collins passed away in 1993. Daughter Kate Collins became an actress, starring in ABC’s All My Children. His other daughter is Ann Starr and he also has a sister.

A statement released by the family reads that he “always faced the challenges of life with grace and humility, and faced this, his final challenge, in the same way. We will miss him terribly.”

Neil Armstrong died in 2012. Collins’ death leaves Buzz Aldrin as Apollo 11’s sole survivor. Aldrin tweets: “Wherever you have been or will be, you will always have the Fire to Carry us deftly to new heights and to the future.”

More on the moon landing: NASA got Sick of Conspiracies so Released over 10,000 Photos from Moon Landing

British astronaut Tim Peake describes Collins as “an inspiration and a legend.”

NASA’s acting Administrator Steve Jurczyk writes: “There is no doubt he inspired a new generation of scientists, engineers, test pilots, and astronauts.”

Mr. Collins passed away in Naples Florida. A small impact crater at the Sea of Tranquillity is named in his honor. He didn’t walk on the moon, but it will forever bear his imprint.