Even though it has been over 20 years since Diana, Princess of Wales was involved in a fatal car crash, she is still a figure who can dominate the headlines. Now, Princess Diana’s wedding dress, which was chosen as one of the Most Influential British Royal Wedding Dress of All Time by Time magazine in 2018, will go on display at a new exhibition in London.

Princess Diana’s life was not the typical royal story

The woman who was to become the Princess of Wales was born Diana Frances Spencer on July 1, 1961. Her parents were John Spencer, the 8th Earl Spencer, and Frances Shand Kydd. Along with her three siblings, Diana grew up in close proximity to Sandringham, one of the main residences of the British royal family.

In fact, her family already had a royal connection in that her grandmothers had served as ladies in waiting to Queen Elizabeth the Queen Mother. 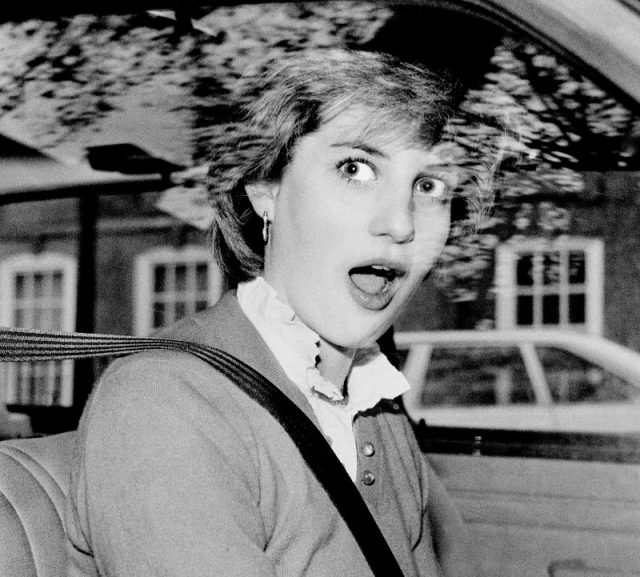 Lady Diana, startled to have stalled her car, shortly before her engagement to Prince Charles was announced. (Photo Credit: Tom Stoddart/Getty Images)

Her early life was pretty undistinguished. Although she wasn’t very academically gifted and failed her O-levels twice, she was nevertheless an accomplished pianist who excelled at swimming, diving, ballet, and tap dancing.

According to the Royal website, she also received an award from her school for being “the girl giving the maximum help to the school and her schoolfellows.” This was undoubtedly the beginning of a philanthropic streak for which she would become renowned.

In 1975, her father inherited the earldom when his father passed away, and Diana became Lady Diana Spencer.

In 1978, she took up residence in a London flat with some old school friends and took on a variety of low-paying jobs, including being a dance instructor, a nanny, and a playgroup pre-school assistant. She also did some cleaning work for her sister, Sarah. 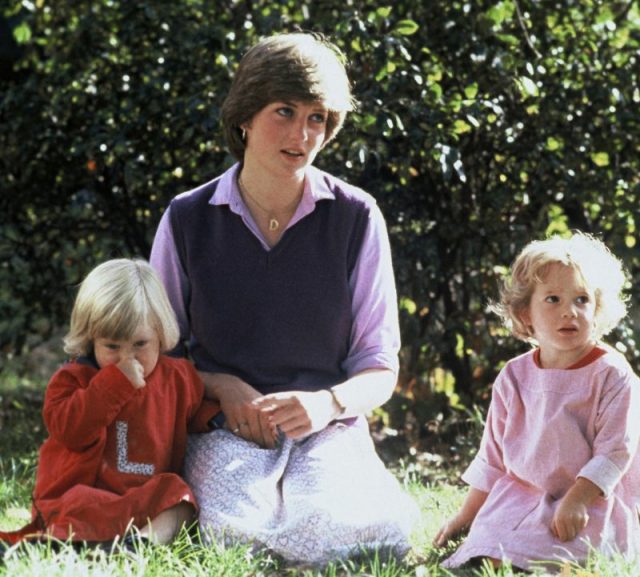 Diana Spencer at the Young England Kindergarten in September 1980 shortly before her engagement was announced. (Photo Credit: Anwar Hussein/Getty Images)

A turning point in her life was when she met Charles, Prince of Wales, the heir apparent to the British throne. They met in November 1977 when Diana was only 16 and Charles was 29. At the time, he was actually dating Diana’s older sister, Sarah.

Charles’s relationship with Sarah soon fizzled out, but it wasn’t until 1980 that Charles and Diana were to meet again. Sources suggest that the two of them only met 13 times before Charles proposed and that a lot of their courtship took place over the phone.

The engagement was announced on February 24, 1981. Diana became the first Englishwoman to marry into the royal family in over 300 years. She was also the first royal bride to have had a paying job before her marriage.

Charles and Diana were married on July 29, 1981, at St Paul’s Cathedral in London. The usual venue for royal weddings was Westminster Abbey, but St Paul’s was chosen because it had more seating. Around 600,000 people lined the streets to watch the couple going to and from the cathedral, and the televised event drew a global audience of 750 million viewers.

The event was described as a “fairytale wedding,” a darkly ironic description given that the subsequent marriage would end in divorce and controversy. A special commemorative coin was issued to mark the marriage. 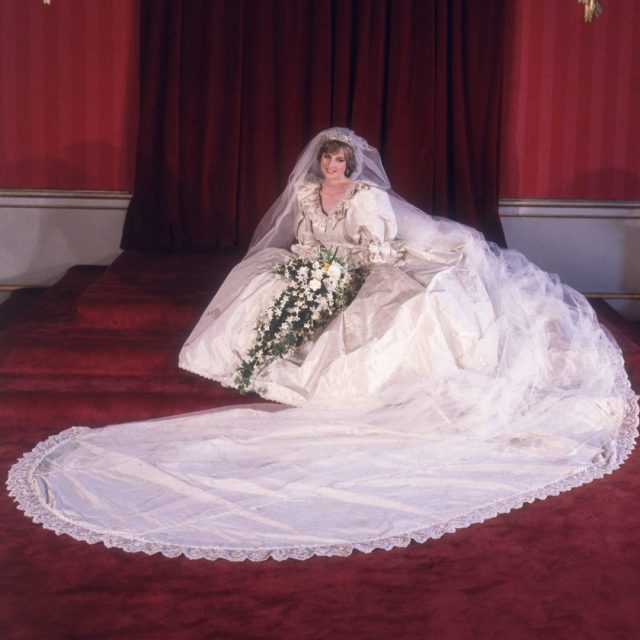 Diana’s taffeta and lace dress was remarkable to behold. The train was 25 feet (7.62 meters) long, making it the longest in royal history, and was decorated with sequins. The accompanying tulle veil measured 153 yards.

Designed by David and Elizabeth Emanuel, the dress had a scooped neckline and puffed sleeves trimmed with bows. It also incorporated some antique Carrickmacross lace that once belonged to Queen Mary, Diana’s great-grandmother-in-law.

The total cost of Diana’s wedding dress was around £9,000, equivalent to just under £35,000 in today’s money. This included 10,000 pearls and an 18-carat gold horseshoe that was stitched into the petticoats for good luck. 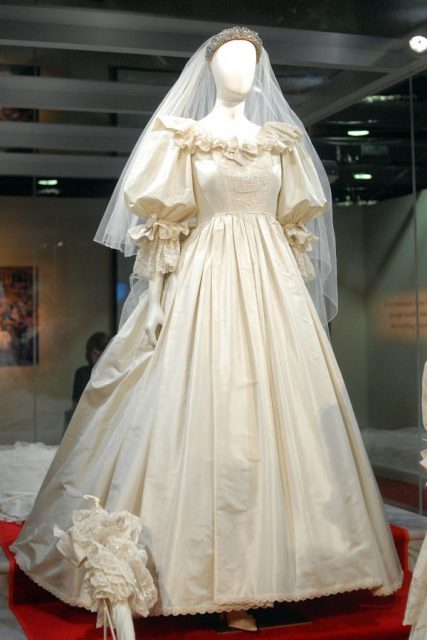 Princess Diana’s wedding dress is displayed at a preview of the traveling “Diana: A Celebration” exhibit at the National Constitution Center on October 1, 2009 in Philadelphia, Pennsylvania. (Photo Credit: William Thomas Cain/Getty Images)

The Emanuels were one of Diana’s favorite designers. As well as the famous wedding dress, they also created a spare (in case the design of the main dress was leaked before the big day) and a parasol in case it was raining. Another dress that they made for her was auctioned in December 2013. It sold for £102,000.

Following the tragic car crash that took place in Paris in August 1997, most of Diana’s financial assets were put in trust for her sons, Prince William and Prince Harry. Her clothes, tiaras, jewelry, and other possessions were left in the care of her brother, who would put them on display in Althorp House in Norfolk twice a year. They were also loaned out for museum exhibitions, generating around two million dollars for charity.

Although Diana bequeathed her engagement ring to her youngest son, Harry gave it to William in exchange for the gold watch William had received. William then used the ring when he proposed to Catherine Middleton in October 2010. 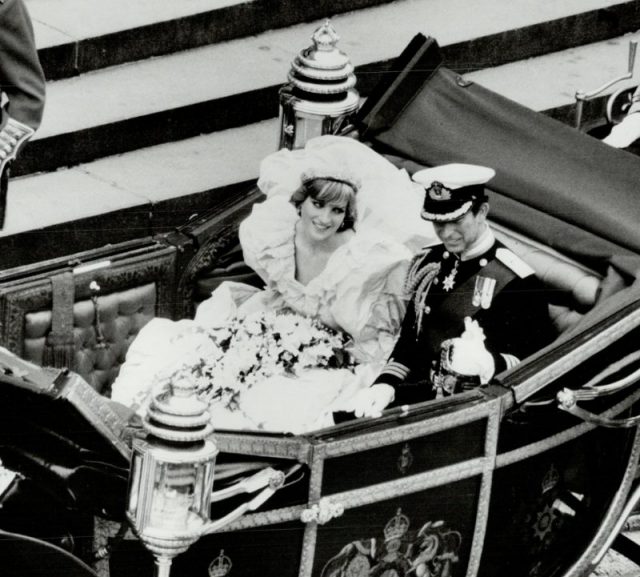 When Prince Harry decided to propose to Meghan Markle, he designed the ring himself and incorporated two smaller stones that had belonged to his mother. Both men said they wanted a way to include their mother in the joy of their future marriages.

While Diana’s wedding dress was ultimately destined for her sons, initially it was left in the care of her brother with other possessions until William and Harry both turned 30. The dress was incorporated as part of the tour for the exhibition Diana: A Celebration but was mostly kept on display at Althorp House.

The iconic dress will now be on view from June 2021 at Kensington Palace in west London. The exhibition will be entitled “Royal Style in the Making” and will also include a toile that belonged to the coronation gown of Queen Elizabeth the Queen Mother.