On October 2, 1766, at the annual Goose Fair in Nottingham, a mob formed which went about looting and stealing…cheese. In what came to be known as the Nottingham Cheese Riot, a variety of cheeses, as large as a barrel, were rolled through the streets, one of them knocking down the mayor when he tried to intervene.

This may sound like the basis for a great comedy, but the whole event had a tragic background that involved food shortages and rising prices causing poverty and desperation in England.

October 1766 was preceded by a poor harvest, and people all across Europe were worried about impending food shortages. Where there is a shortage of food, market forces will drive up the prices of the most valuable items. Eighteenth-century producers of wheat, flour, corn, and other foodstuffs were tempted to ship their produce to more profitable foreign markets, a move which naturally met with an outcry from the British population.

The Nottingham Goose Fair was the perfect kindling for this tinderbox of unrest. The fair had been going on for many years, situated in the Old Market Square. While it had started out just with geese (a favorite meat at Michaelmas), by the 18th century, plenty of other foodstuffs were sold at this market. 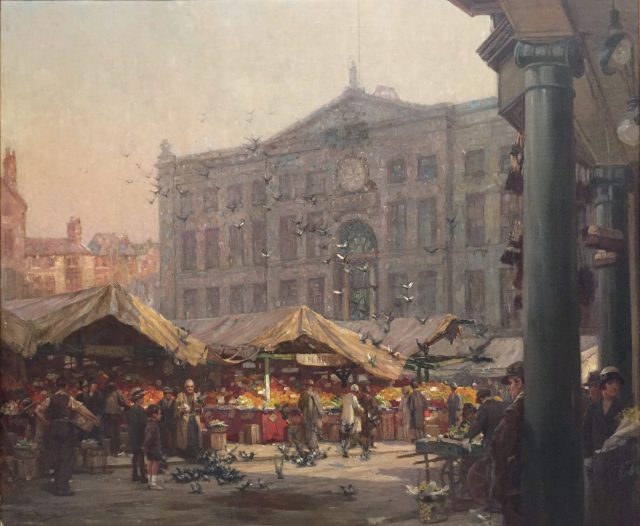 Records show that cheeses at this particular market were on sale for 28–36 shillings per hundredweight. These prices were double what they had been just one week before in Coventry, and would be equivalent to £140–180 today. This meant that virtually none of the locals could afford to buy the cheese on sale at their own market, and this fact set many of them grumbling and grinding teeth.

The final spark that fueled the riot was the fact that some Lincolnshire traders purchased a large amount of cheese with the intention of taking it back to their own county to sell. A group of Nottingham locals demanded that the merchants not take the cheese away but sell it to the Nottingham people instead.

What followed involved widespread looting of warehouses, shops, and a cargo boat. Even those offering reasonable prices were caught in the backlash as locals set up roadblocks to prevent anyone from leaving the town with cheese. A few people were arrested, but the mobs descended and the authorities had no choice but to release their prisoners. 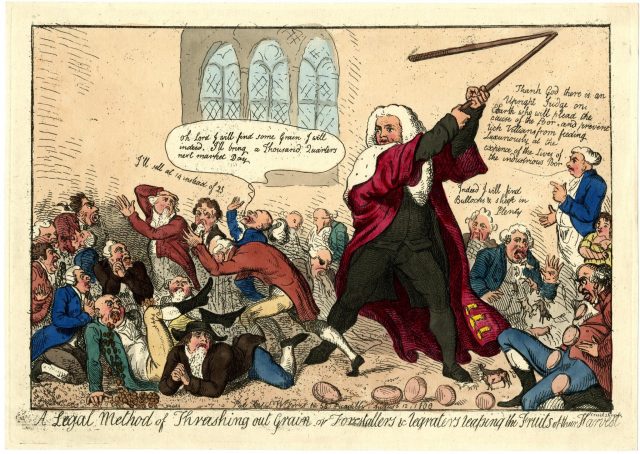 A magistrate using a flail on food profiteers (Photo Credit: The Trustees of the British Museum CC BY-NC-SA 4.0)

One warehouse owner organized a mounted posse to recover some of his cheese, which had been taken to Castle Donington. However, when they arrived, the magistrate refused to sign a search warrant for the houses. A volley of stones thrown by women and children finally saw the posse retreating, forced to leave the cheese behind.

Because cheeses at that time were sold in large wheels roughly the size and shape of a small barrel, many of the looters simply rolled the cheeses down the street — a method that resulted in the mayor himself being knocked down.

With the mayor unable to maintain control, the army became involved. At the time, the 15th Dragoons were stationed in the town and tried to restore some order. Shots fired into the crowd resulted in at least one fatality: William Eggleston, a farmer who was trying to protect his cheese and whom the soldiers mistook for a looter. It’s possible that others were injured or lost their lives, but their names are not recorded anywhere.

The unrest continued not only overnight but for the next few days too, resulting in those transporting cheese needing an armed escort.

The Cheese Riot is part of Nottingham’s history

The Nottingham Cheese Riot might have been a unique event, but it was not an isolated one. There was unrest in and around the area. The People’s Histreh has produced a pamphlet that details not only the Nottingham event but also the other riots that happened in and around 1766. It is available as a PDF on their website for anyone who is interested in learning more about this period of history.

The Nottingham Goose Fair is still held today, although in modern times, it has become a showman’s fair with fairground rides and attractions. Estimates suggest that more than 400,000 people attend over the five days that the fair is running.

More about Nottingham: City of Caves: The hidden world of man-made caves beneath the streets of Nottingham

And while the events of the Cheese Riot might be unknown to the majority of the world, October 2, 1766, is still an important date for the citizens of Nottingham. In fact, the Mayor organized an event to mark the 250th anniversary in 2016. Together with the owners of The Cheese Shop (a local Nottingham business), the Mayor retraced the steps of those involved in the original cheese riot.