Taika Waititi is one of the world’s most maverick filmmakers. Now he’s playing one of history’s most murderous pirates…Blackbeard.

Waititi is already executive producer and director on the upcoming HBO Max comedy Our Flag Means Death. The move in front of the camera has the versatile New Zealander joining star and frequent collaborator Rhys Darby (Flight Of The Conchords, Jumanji) on deck.

The show will be loosely based on a real story

Variety broke the news. A statement reads the historic romp is “loosely based on the true adventures of Stede Bonnet (Darby), a pampered aristocrat who abandoned his life of privilege to become a pirate.”

It’s certainly a different approach to a well-worn genre. In a 2007 article titled “The Gentleman Pirate,” Smithsonian magazine describes Bonnet as practically a fashion icon compared to the swarthy sea dogs he hung out with.

He apparently “had no knowledge of seafaring, having sailed only as a passenger.” While it isn’t clear why Bonnet left his family to embrace the skull and crossbones, his story reportedly impacted on piratical perceptions. 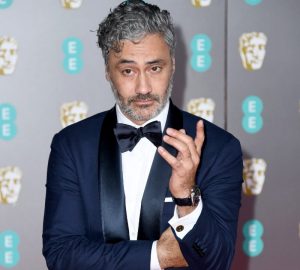 The magazine spoke to The Republic of Pirates author Colin Woodard. He says that Bonnet and his more grizzled Caribbean contemporaries “are responsible for the images we have of pirates today.”

Woodard goes on to mention the myth-making around figures like Bonnet and Blackbeard, whose real name was Edward Teach.

As covered by Royal Armouries — sourcing famous 1724 text “A General History of the Robberies and Murders of the most notorious Pyrates” — Teach was probably a Bristolian who spent some time in the Navy.

That strait-laced life came undone when he turned to piracy. One notable detail was his habit of putting lit matches under his hat to create a hellish impression.

It maybe isn’t a spoiler to state that Teach met a violent end in 1718. The book states he “fought with great Fury” at the Okracoke Inlet around North Carolina, where he “received five and twenty Wounds, and five of them by Shot.”

He seems to have dropped dead in the middle of cocking his pistol. Lt Robert Maynard is the man who took him down. Maynard then stuck Blackbeard’s head on the prow of his vessel. 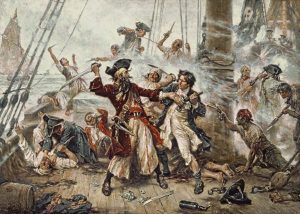 Will Waititi and company be putting fact before fantasy? Unlikely, given their track record for imaginative fare. Still, the official account wouldn’t look out of place in a Waititi production.

Our Flag Means Death showrunner David Jenkins refers to Blackbeard as “a legend, a lover, a fighter, a tactical genius, a poetic soul, and quite possibly insane.” He adds Waititi is the only man who can play him!

Taika Waititi has a lot in the works

Waititi’s brand of quirky mayhem is greatly in demand. He gave the Thor franchise a new lease on life in 2017’s Thor: Ragnarok. The next installment, Thor: Love & Thunder is in production and stars Natalie Portman as a variation on the hammer-wielding hero called The Mighty Thor.

He recently jumped ship — albeit briefly — from Marvel to DC, filming a role in James Gunn’s The Suicide Squad.

More from us: The Egalitarian and Democratic System of Pirates was way Ahead of its Time

The Star Wars universe welcomed him as the voice of bounty hunter droid IG-11 in Disney+ hit The Mandalorian. Ever the multi-tasker, he directed some of the show, too. An original Star Wars movie is also on the way from Waititi.

This isn’t his first time playing a historical figure. His performance as Hitler in the director’s own Jojo Rabbit (2019) proved to be an attention grabber.

A release date for Our Flag Means Death is yet to be announced.