Many parents have cursed Disney’s Frozen movie after their children played “Let It Go” on a loop for months on end. But for one Swiss scientist, an avalanche scene in the 2013 movie provided some much-needed insight into a tragic, mysterious incident from over 60 years ago.

In the 1950s, a group of Russian students, all of whom were experienced Grade II hikers and skiers, planned a trip over the Ural Mountains to achieve their Grade III certifications. Their leader was Igor Dyatlov, a 23-year-old radio engineering student at the Ural Polytechnical Institute.

Once the route was approved, the group of 10 students came together on January 25, 1959, and set off on their trek two days later.

After only one day, Yuri Yudin was forced to turn back due to knee pain. The nine remaining hikers continued without him. What happened after that can only be theorized from diaries and cameras that have been recovered.

The group cached food and equipment in a wooded area on January 31, ensuring they had supplies for the way back. The next day, they started through what would become known as the Dyatlov Pass, intending to reach the other side by that evening. 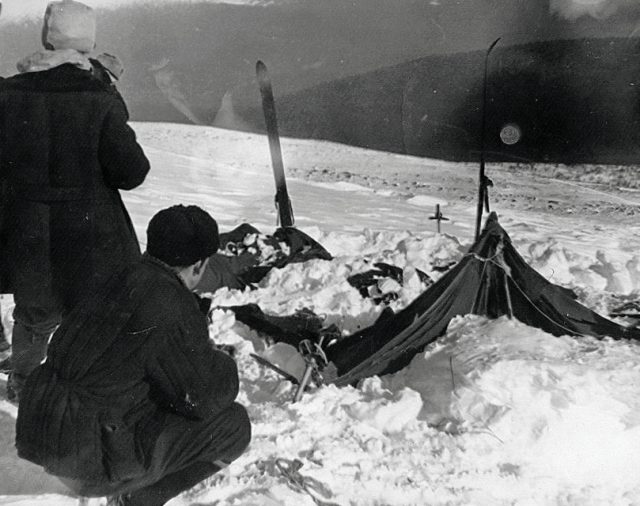 However, snowstorms meant the group accidentally headed west towards Kholat Syakhi. When they realized their mistake, they chose to set up camp there rather than trying to walk almost a mile back down the mountain to a more hospitable forested area.

This is all that can be said for certain. After that, it’s all speculation.

The plan had been that the group would send a telegram to the sports club when they reached Vizhai on February 12. When no message had been received by February 20, volunteer rescue groups were dispatched, followed by the army and police forces.

It was February 26 when the tent was discovered. It was half-collapsed, covered with snow, and had been cut from the inside. It was empty of people but contained the group’s clothes and shoes. Following footprints brought the searchers to a nearby forest where they found evidence of a fire and the first of the bodies. 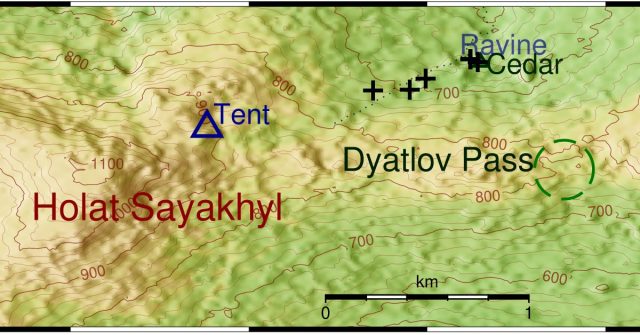 Georgiy (Yuri) Krivonischenko and Yuri Doroshenko were wearing only underwear and had no shoes on. Between 300 and 630 meters (980 and 2,070 feet) away were the remains of Dyatlov, Zinaida Kolmogorova, and Rustem Slobodin. It looked like they’d been trying to return to the tent.

The remains of Nikolai Thibeaux-Brignolles, Semyon Zolotaryov, Alexander Kolevotov, and Lyudmila Dubinina were not found for another two months because they’d been buried under four meters (13 feet) of snow in a nearby ravine.

What was so puzzling about these new bodies were the injuries they had sustained, which included fractured ribs and skulls as well as missing eyes and tongue.

Initially, the investigation found that first five members of the party who had been found had suffered several wounds, none of which were fatal. It was most likely that these students succumbed to hypothermia. 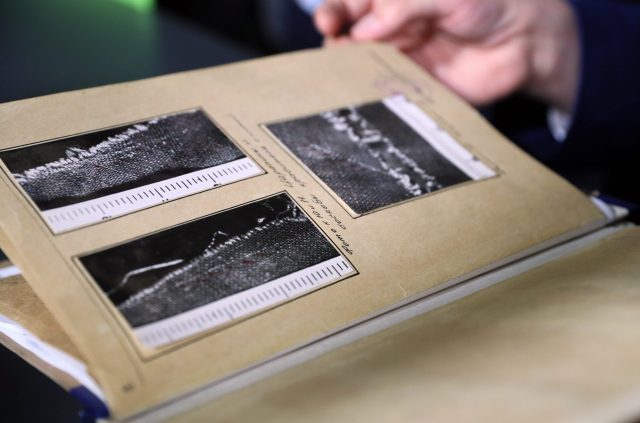 Files seen during a press conference on the investigation of the Dyatlov Pass Incident case. (Photo Credit: Donat Sorokin\TASS via Getty Images)

However, the injuries on the four later bodies complicated matters. Experts reckoned that the force necessary to cause such damage would have been equal to a car crash, and yet there were no external injuries to suggest bone fractures.

This mystery deepened when other factors were taken into account. The missing soft flesh; all the bodies being a strange yellow color; and some of the clothing displaying radioactivity. Since the bodies had been lying in a stream bed for several months, most likely predators had eaten away soft flesh. But the cause of the other injuries seemed to defy explanation.

With no apparent guilty party, the finding was that the deaths had been caused by a compelling natural force. The case was closed in May 1959 and the documents were archived.

Like many incidents in Soviet Russia, this one was marked as secret and not widely reported. But the case came to the public’s attention in 1997 when Lev Ivanov, the lead investigator, retired and told a newspaper that he thought UFOs were responsible for the group’s plight.

The mystery captured the public imagination. Why would experienced hikers and skiers leave their tent in the middle of the blizzard with no clothing or footwear?

Some witnesses came forward to say that they’d seen orange spheres in the sky that night, suggesting UFO activity or a secret weapon experiment. Other theories involved yetis, attacks by natives, romantic tensions leading to a brutal fight, or a nuclear weapon test gone wrong.

Some argued that the yellow color of the bodies lent weight to the nuclear testing theory (bolstered by the radioactive clothing), but others suggested the coloration was due to natural mummification in the cold conditions.

The mystery is reopened

In 2019, Russian authorities reopened the case in an effort to squash rumors. The inquiry considered three possible theories: an avalanche, a slab avalanche, and a hurricane. 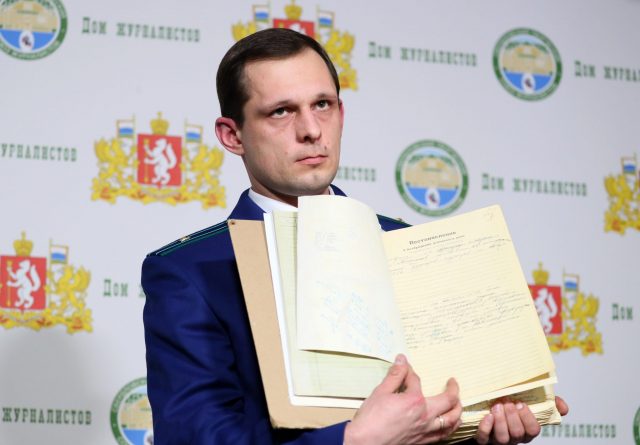 In 2020, the most plausible explanation was put forward: that a slab avalanche had occurred. This happens where a top layer of snow comes loose from the layers below it. The fast-moving chunks that roll down the incline in such events could cause the injuries seen in the hikers.

Yet contradictory elements remained. There had been no snow patterns or debris in the area that pointed to an avalanche, and those involved caught in avalanches usually succumb to suffocation, not hypothermia and fractures.

It seemed no theory could explain every piece of evidence.

How a movie helped explain it all

Johan Gaume, a Swiss scientist, was watching the film Frozen when he realized that he might know a way to prove what really happened at the Dyatlov Pass. As reported by National Geographic, he approached Disney for the code that the snow effects animators had used to create a scene where the characters escape an avalanche.

Together with Alexander Puzrin, the two scientists used the code to recreate the Dyatlov Pass incident. Their results showed that blocks of snow could have fallen onto those in the tent, causing their injuries.

The scientists theorized that a katabatic wind might have contributed to the avalanche, as well as the fact that the snow that night was “depth hoar” snow made up large snow crystals that don’t clump together very well.

The article was published in Nature, and it’s available for anyone who wants to read it. Perhaps it will provide an answer and some closure to the tragic episode.

Just a few days ago, it was announced that filmmaker Liam Le Guillou had sold his documentary about the Dyatlov Pass mystery, An Unknown Compelling Force, to 1091 Pictures. The program is due to be released on home entertainment platforms on June 15, 2021.

More from us: Before Coins, People Used Scrap Metal As Currency

At this stage, details are sketchy as to what the documentary will show or whether it will incorporate this new finding. But if history is anything to go by, it’s clear that the Dyatlov Pass mystery will still capture the public imagination, even if it is one day fully explained.