A 1,000-year-old canoe crafted by Native Americans has been recovered from the bottom of Lake Hancock in Polk County, Florida. The find reveals intriguing details about how life was lived in the state’s ancient past.

Made of wood, the approximately 20-foot-long boat could carry around seven people across the water. Originally, it would have been shaped from a cypress tree, with the raw material softened by heating it over a fire in the traditional way.

The story was reported by Spectrum Bay News 9’s Ashonti Ford. She spoke to Bartholomew Delcamp, a curator at Lake Wales History Museum. Ford’s coverage reveals the “dugout” canoe was spotted back in 1994 by the Thomas family.

“Florida has more dug out canoes than any other place in the world.”

What happens when a 10-century-old boat is pulled from the water?

The canoe was well-preserved in the water, thanks to heavy peat deposits and a lack of bacteria-encouraging oxygen.

However, taking it out was a different matter. Delcamp notes the vessel started disintegrating on contact with the 20th-century atmosphere. Archeologists had to put it straight into some resin to stop the wood from falling apart. Not for a brief period either — apparently, it needed to be submerged for a year!

Accompanying Museum info states the canoe was used “primarily for transportation circa 984 CE.” During this time, “Timucuan and Calusa tribes lived in Central Florida.”

A simple canoe tells a complex tale of Florida’s history

Delcamp expands on the area’s Native American heritage, saying “all of Polk County was a Seminole reservation until the war when they were pushed further south into the Everglades.” 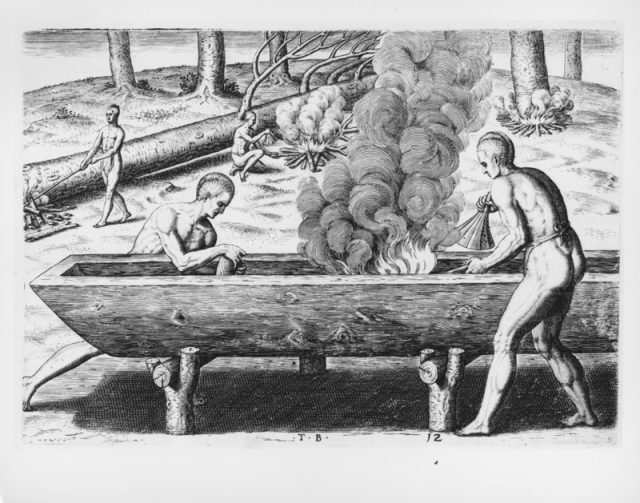 An engraving from 1590 shows the construction of a North American dugout canoe.

Those conflicts were waged by the U.S. Spain used to control Florida between the 16th and 19th centuries. Delcamp explains how Spanish settlers arrived and destroyed tribes with their accompanying diseases, ending thousands of years of occupation.

With an abundance of water, Florida beats the world when it comes to dugout canoes — a fact revealed in a video report posted by Ford on social media.

Tribes relied on the natural world. Delcamp says that lakes were “the lifeblood of the community.”

Native American boat-building and their reliance on the water 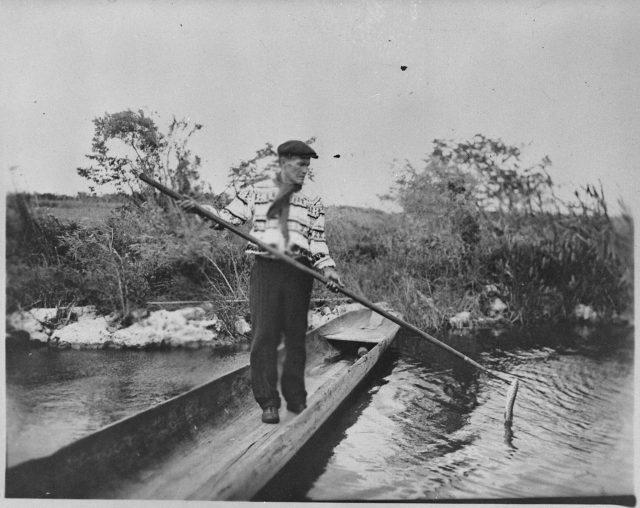 A Seminole spearing a garfish from a dugout, Florida, 1930.

Cultural website Yvwiiusdinvnohii delves into the history of Native American boat building. Referring to dugouts, they write the canoes were “incredibly simple, with logs being only minimally adapted from their log shape.”

In addition to the “basic” models, some craftsmen went further via the addition of intricate carvings. Also employed were “special bending techniques that created unique shapes to make the boats quicker.”

Other water-based modes of transportation include the Plank — literally cedar wood planks joined together. The Bark featured a wooden frame over which material would be stretched, making it economical in weight.

While boats such as canoes are associated with paddling, sails were reportedly used by the Ais and Calusa tribes in Florida. Plant fibers became one of the elements that went into the wind-catching material.

The International Canoe Federation also explores the backstory. “From the Native American tribes to the Polynesians, the canoe enjoyed a variety of scales and uses,” they write, “primarily transport, trade, and warfare.”

This isn’t the only historical bombshell in town

It isn’t just ancient history that rests in Polk County waters. Ashonti Ford reported on a practice bomb from World War II that was found by local fishermen. In true 21st century style, the events were captured as they happened by the crew and posted to TikTok.

I’ll tell you how it got there on @BN9 pic.twitter.com/IyUA5m3RiA

The Air Force Bomb Squad apparently had to travel out there to detonate the old school explosive artifact, and firefighters had to put out the blaze afterward. Proof that the past is not just fascinating…it can be very dangerous, too.

A Native American canoe is more manageable by comparison. Yet this amazing slice of history has its own, equally significant tale to tell.