5 Movie Set Curses Guaranteed To Give You Nightmares

Do you believe in curses? While most skeptics laugh at the absurdity of such a question, it’s one many in Hollywood ponder. Over the years, there have been numerous reports about cursed film sets that have been fueled by some surprising — and often tragic — events. Here are just five examples of some of Tinseltown’s most ill-fated sets.

Let’s start off with a silver screen classic. The Wizard of Oz was MGM’s response to the commercial success Disney saw with the release of Snow White and the Seven Dwarfs. It was an instant hit and helped secure Judy Garland the Academy Juvenile Award in 1940.

A box office success, it wasn’t without its on-set pitfalls. While many often cite Toto’s paw getting sprained after an encounter with one of the Wicked Witch of the West’s soldiers or the incident involving the flying monkeys, there are two primary reasons why the film set was considered cursed. 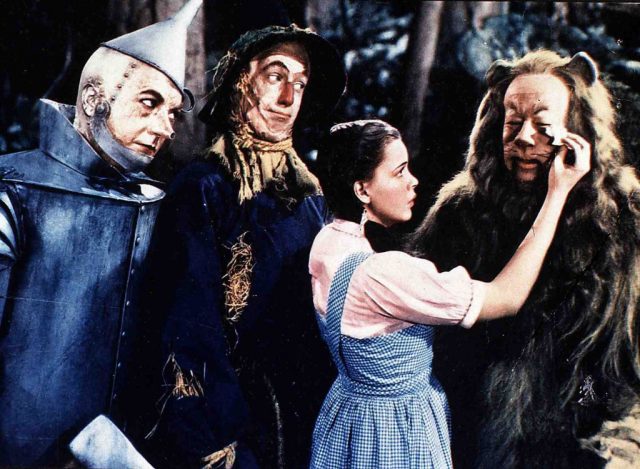 The first relates to the Wicked Witch herself, Margaret Hamilton. To make her infamous “melting” scene look as realistic as possible, the film crew placed dry ice beneath her cloak and built a trap door into the studio floor. However, the timing was off during one of the takes, and Hamilton was sent to hospital with third-degree burns. To make matters worse, her face paint was copper-based, meaning she risked being poisoned if it seeped into her wounds.

The film’s makeup artists also used toxic aluminum powder to make the Tin Man look like he was actually made of metal. However, this resulted in the original actor, Buddy Ebsen, being sent to hospital with lung irritation. When it became clear Ebsen wouldn’t be returning, he was replaced by Jack Haley, and the aluminum powder was mixed into a paste that was less likely to be inhaled (but still pretty dangerous).

Rosemary’s Baby is known as one of the films that redefined the horror movie genre. Maybe that’s why it’s no surprise many believe its cast to be cursed.

Upon the film’s release, two production staff experienced medical issues. Producer William Castle developed kidney stones not long after receiving letters denouncing him as a Satanist, which resulted in numerous hospital visits throughout his life. Another case involved composer Krzysztof Komeda. He died of a brain hemorrhage four months after a fall left him in a coma. 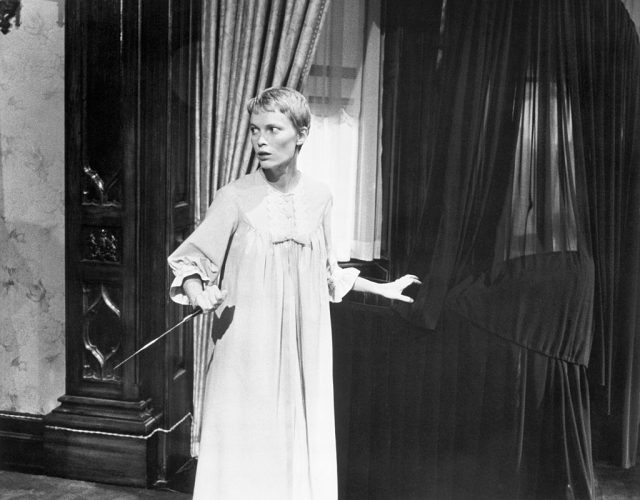 The film’s New York City location is also one of lore. Many scenes were shot at the Dakota Apartments, which are now infamous as the scene of John Lennon‘s 1980 murder. While many see this as merely coincidental, others speculate Lennon’s death was the curse’s doing.

Finally, many believe there’s a connection between the movie and the 1969 Manson Family murders of Sharon Tate and four others. Tate was the wife of director Roman Polanski, and many feel the film’s Satanic undertones connect it to Charles Manson and the crimes committed by his followers.

The Exorcist is without a doubt one of the most controversial horror films ever released. To start, many, including televangelist Billy Graham, felt just watching the film in theaters meant you were allowing demons to exert control over and corrupt your soul. It didn’t help matters that many moviegoers either fainted or became sick whilst watching it.

During filming, the set experienced a fire that delayed production several weeks. According to reports, a pigeon had flown into a circuit box, but that’s not what caught everyone’s attention. It turns out one room was left untouched by the flames: Regan’s… Likely because it was already filled with demonic energy. 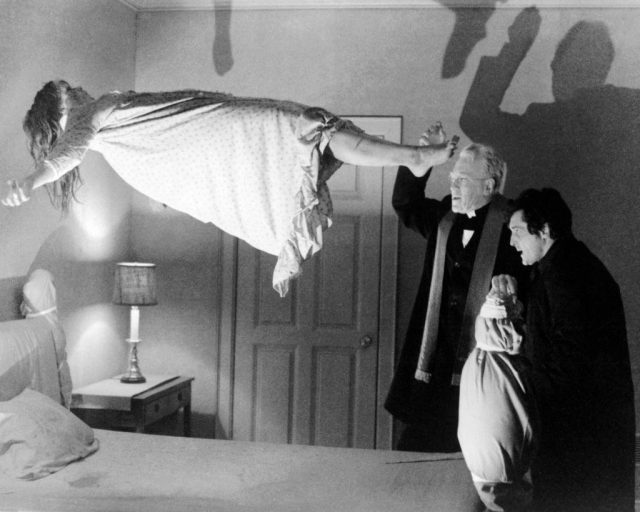 Similar to Rosemary’s Baby, there are reports of injuries and death tied to the set. Ellen Burstyn sustained a back injury whilst filming a scene, and Jack MacGowran and Vasiliki Maliaros both passed within months of wrapping up work. It doesn’t appear as though it was limited to just those on set either, as Max von Sydow’s brother also died.

As if that’s not enough, there’s also a murder connection to the film. Radiographer Paul Bateson, who played the role of the technologist, was put on trial for the 1977 murder of film journalist Addison Verrill. No motive was given, but reports surfaced that Bateson had been talking to fellow inmates about other murders he’d committed. While unconfirmed, it doesn’t do anything to dispel the film’s haunted legacy.

This is an example of a Hollywood curse that doesn’t just affect a single film, but an entire franchise. From death to broken relationships, it appears this might be the most cursed superhero franchise of them all.

George Reeves portrayed Clark Kent during the Adventures of Superman TV series during the 1950s. The show was a hit, but meant the actor had difficulty finding roles outside of the persona. Reeves eventually fell into depression and took his own life on the evening of June 6, 1959 — or did he? Many speculate he was murdered by MGM General Manager Eddie Mannix in retaliation for his relationship with Mannix’s common-law wife. 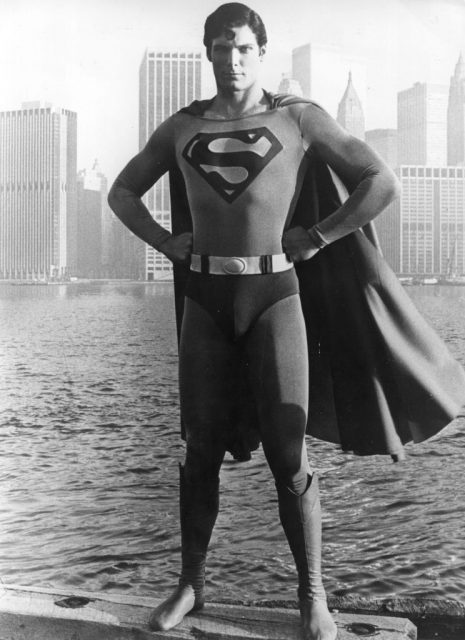 The son of Krypton was played by Christopher Reeve during the 1970s and 1980s. In 1995, he became paralyzed after an accident at an equestrian event left him with fractures to his first and second cervical vertebrae. Despite occurring so long after his stint as Superman, many attribute this injury to the franchise’s curse.

While many assume the curse is gone, one need only turn to 2006’s Superman Returns to see differently. Actress Kate Bosworth, who portrayed Lois Lane, believes the curse is behind her breakup with longtime boyfriend Orlando Bloom. As well, many ill-fated events happened to the crew, including a fall down a flight of stairs, a mugging, and a fall through a window… Ouch!

Poltergeist is considered the most cursed movie franchise in the history of cinema. Throughout the original trilogy of films, misfortune befell the cast at every turn, and many attribute it to grave-robbing. According to JoBeth Williams, who played Diane Freeling, the skeletons seen in the movie are real ones director Steven Spielberg had taken from graves.

While Freeling’s claim is unconfirmed, many believe the ghosts of those whose bones were taken created the curse. If that’s not creepy enough, actor William Sampson performed an actual exorcism one night after filming. It’s safe to say the cast probably weren’t too pleased about that. 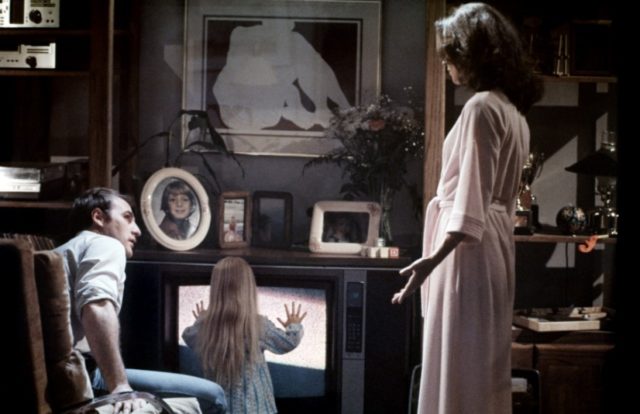 There are also four deaths associated with the franchise. While two are seemingly explainable — Sampson died after undergoing a heart/lung transplant and actor Julian Beck passed from stomach cancer — two seem to further prove the curse’s existence.

More from us: How Hollywood Got Our Hopes Up For The Pentagon’s UFO Report

The first is the death of Dominique Dunne, who was strangled to death by her boyfriend in 1982. The second is the tragic passing of 12-year-old Heather O’Rourke, who played Carol Anne. The young actress was admitted to hospital after being misdiagnosed with the flu and died of complications from a blockage in her intestine. It turns out she had an undiagnosed congenital intestine issue.