P. hyalina is one of the last native snails on Tahiti and has evaded a predator that wiped out 56 other species. Scientists had an idea back in 2015 as to why this particular snail might have escaped predation, but they couldn’t prove it — not until someone invented a computer tiny enough to put on a snail’s shell.

One bad decision after another

The native land snails of the South Pacific Society Islands have been referred to as the “Darwin finches of the snail world.” Since each type of snail in the Partulidae family is native to a specific geographical location, over time, they have developed adaptations that allow them to live in that particular environmental niche. 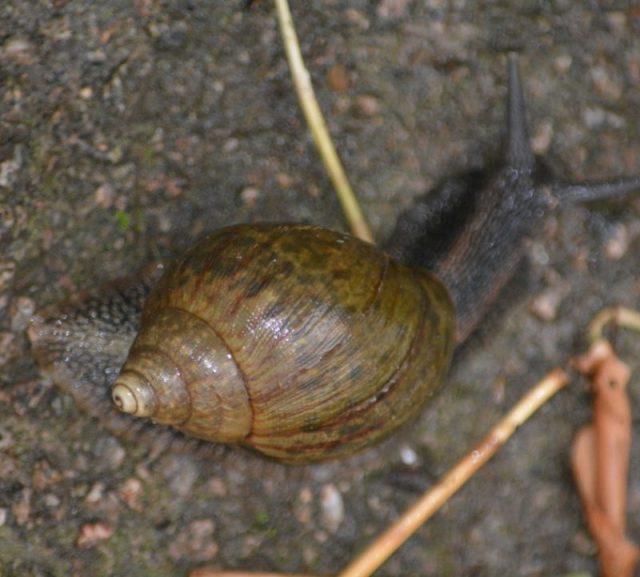 At one point in history, a decision was made to introduce giant African land snails to the South Pacific to improve the diversity of food sources. However, as the giant land snail got out of control, it was further decided that the rosy wolfsnail (Euglandina rosea) should be introduced to the area. The rosy wolfsnail is a cannibal snail that preys on other snails and slugs.

The outcome was that many native snails were swiftly wiped out by this new predator. Those species which survived were generally found in high altitudes or isolated valleys.

The white-shelled snail of Tahiti

One snail that escaped extinction was P. hyalina, a snail with a distinctive white shell. Why it was able to survive when others did not wasn’t clear, but two biologists developed a theory. 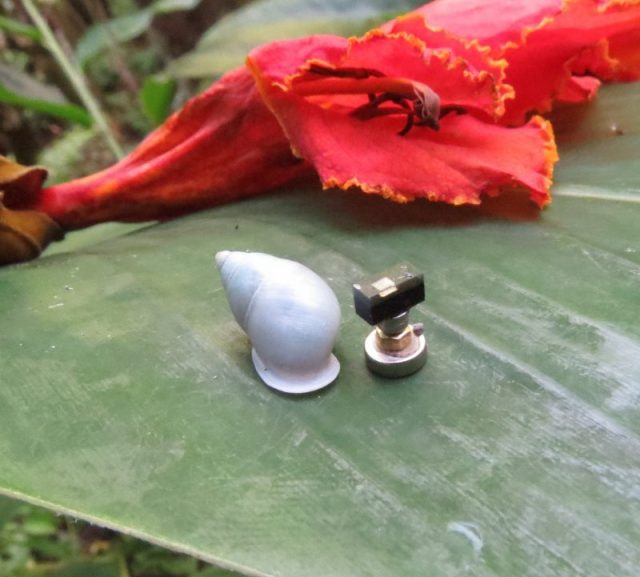 P. hyalina next to a mote computer on a red ginger leaf. (Photo Credit: Inhee Lee)

In 2014, Diarmaid Ó Foighil and CS (Cindy) Bick of the University of Michigan, along with Trevor Coote of the Partulid Global Species Management Programme, put together a paper about this ecological issue.

They noted that the rosy wolfsnail was “a potent extinction agent” and that field surveys had established that only two of seven endemic species of Partula had survived. The abstract to that paper, available online from the University of Cambridge, states: “We hypothesized that P. hyalina and P. clara have survived because they were the most abundant and/or widespread species and they will eventually become extinct.”

A year later, the researchers began trying to figure out exactly how P. hyalina escaped the predations of the rosy wolfsnail. They wondered if the color of its shell had anything to do with it. P. hyalina has a distinctive white shell which has made it particularly valuable to Polynesians who use the shells for jewelry and leis.

Ó Foighil and his team wondered if perhaps this shell meant that P. hyalina could survive in areas where other, dark-shelled snails would swiftly overheat. But how to test such a hypothesis?

The Michigan Micro Mote (M3) to the rescue

To try and conduct research into the habits of this snail, the researchers turned to computer engineers.

In 2014, David Blaauw, the Kensall D. Wise Collegiate Professor of Electrical Engineering and Computer Science at the University of Michigan, led a team that developed the Michigan Micro Mote (M3). The M3 was an important development in computer technology because it was a complete computer, one that can input, process, store, and output data. 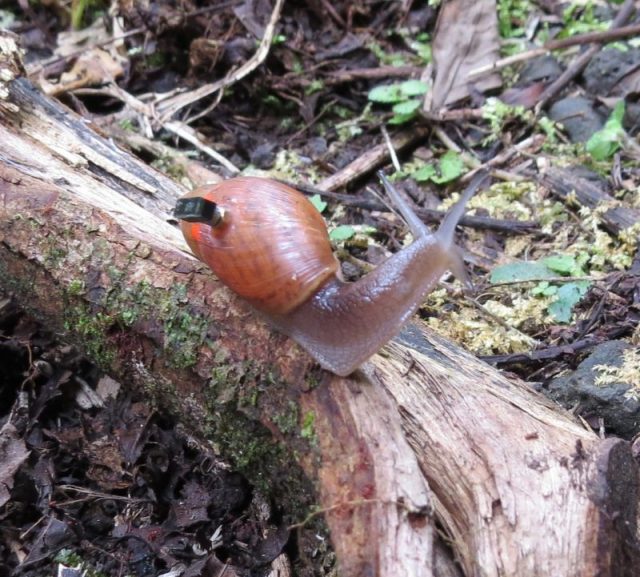 According to the University’s M3 website, the computer is so small that nearly 150 of them could fit inside a single thimble. This was the perfect size for fixing to a snail — anything bigger might add so much weight to the snail that it couldn’t move around properly.

But what the biologists needed was a computer that could specifically track how much light the different snails were exposed to during the day. That’s where Inhee Lee, assistant professor of electrical and computer engineering at the University of Pittsburgh, was brought in to help. In the press release from the University of Michigan, Lee is quoted as saying: “It was important to understand what the biologists were thinking and what they needed.”

At that time, the computer scientists were experimenting with adding tiny solar cells to the M3 so that its batteries could be recharged. Lee realized that measuring how fast the battery was charging would allow the biologists to determine how often and how long the snail was exposed to sunlight.

Once this solution was realized, trials were carried out on local Michigan snails before 50 M3 computers were sent to Tahiti in 2017. 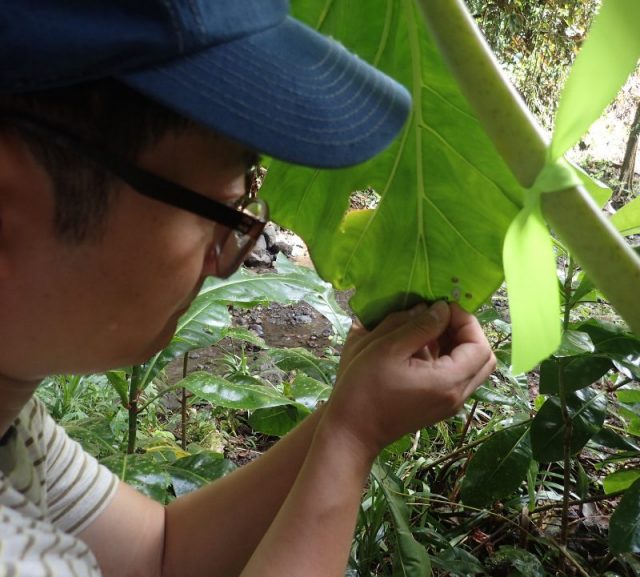 It was simple enough to attach this tiny computer to rosy wolfsnails but trickier when it came to P. hyalina, which is a protected species. P. hyalina is mainly a nocturnal animal, spending most of the day sleeping on the underside of leaves. So the biologists used magnets to attach the M3s to the top and bottom of leaves where they found P. hyalina at rest.

When the data was downloaded, the results showed that P. hyalina was exposed to 10 times more sunlight than the rosy wolfsnails. This led the biologists to theorize that P. hyalina has survived because it stays in areas where the rosy wolfsnail cannot go without overheating. Even if it traveled during the night, the predator wouldn’t have enough time to reach its prey and then return to shade before the sun became too hot.

In the Michigan University press release, Ó Foighil states: “The M3 really opens up the window of what we can do with invertebrate behavioral ecology and we’re just at the foothills of these possibilities.” That seems to be the case, with the next collaboration being one that tracks monarch butterflies.

Hopefully, this advance in human technology will enable scientists to monitor and reverse disastrous ecological decisions that have threatened our natural ecosystems.

« Have The Final Two Zodiac Killer Ciphers Finally Been Solved?
False Teeth, A Poisoned Comb, And Awful The Dwarf — Fun Facts About Disney’s Original ‘Snow White And The Seven Dwarfs’ »