Have The Final Two Zodiac Killer Ciphers Finally Been Solved?

The Zodiac is the moniker given to the serial killer who operated in northern California during the 1960s and 1970s. The unsolved nature of his crimes has made him a popular topic on true crime forums. Of particular interest are the handwritten ciphers he sent to local media, which, until recently, largely remained undeciphered.

A community is terrorized

The Zodiac Killer is responsible for four murders between 1968 and 1969, including the December 1968 shooting deaths of David Faraday and Betty Lou Jensen, and the September 1969 Lake Berryessa stabbings of Cecelia Shepard and Bryan Hartnell. Shepard unfortunately died of her injuries.

He’s also connected to the July 1969 shootings of Darlene Ferrin and Michael Mageau, as well as the September 1969 shooting death of taxi driver Paul Stine in San Francisco. The latter crime was observed by witnesses, who were able to help develop a composite sketch of the killer.

Despite hundreds of hours spent collecting statements and analyzing evidence, investigators weren’t able to uncover the Zodiac’s identity. Many suspects appeared on their radar, but there was never enough to tie one single person to the murders.

Along with the definitive connections, there are some crimes that many believe match the Zodiac’s M.O. These include the 1966 stabbing death of Cheri Jo Bates and the 1970 disappearance of Donna Lass, among others. It’s also suspected the 1970 attempted abduction of Kathleen Johns and her infant daughter was the work of the Zodiac. Luckily for the pair, Johns was able to escape.

Handwritten ciphers are delivered to the media

The Zodiac played upon the community’s fear. He sent numerous handwritten letters to local media, in which he claimed responsibility for the murders. Four letters also included ciphers designed to taunt police. 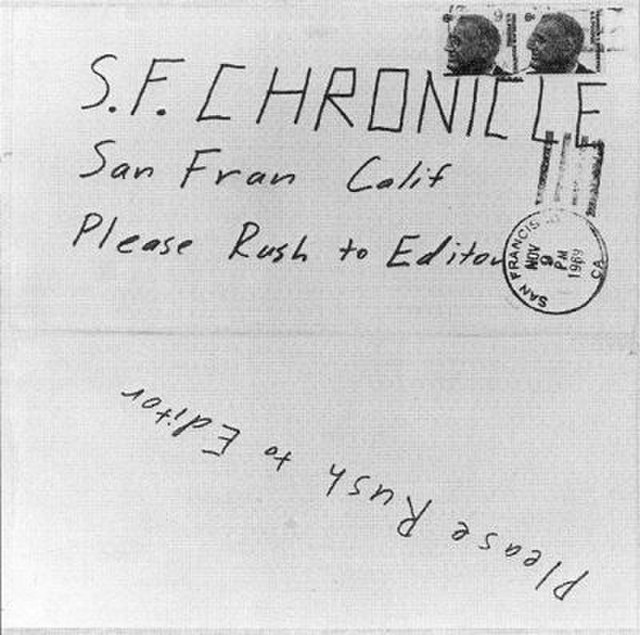 The first letter and cipher were sent to the press on July 31, 1968. It was cracked by a high school teacher and his wife. In it, the Zodiac described how he enjoyed “killing people because it is so much fun. It is more fun than killing wild game in the forest because man is the most dangerous animal of all.”

Three other ciphers and numerous letters were sent before the Zodiac ceased communication in 1974. The second cipher, dubbed “Z340” for its 340-character length, was sent to the San Francisco Chronicle after Stine’s murder. Included in the envelope was a bloody piece of the taxi driver’s shirt. 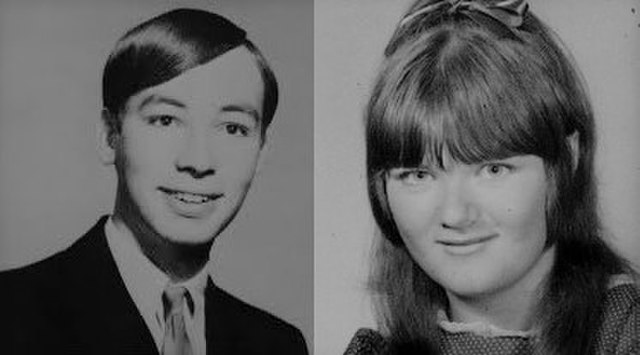 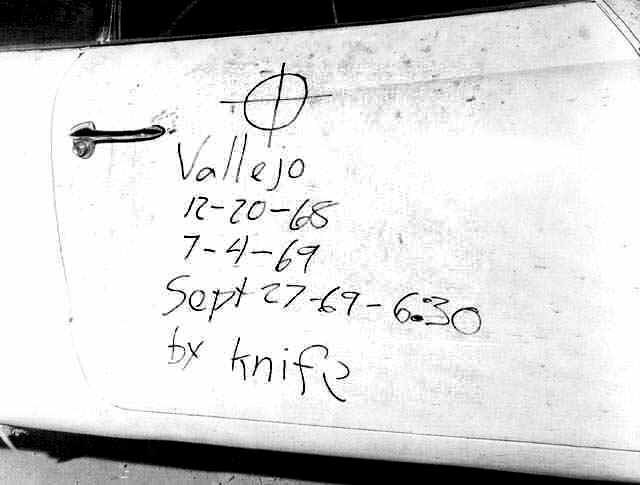 The contents of the cipher made reference to various factors of the case, including the Zodiac’s previous statements regarding his collecting of “slaves.” It also made mention of a morning talk show, where a caller claiming to be the killer said, “I don’t want to go to the gas chamber.” The interview had taken place two weeks before the letter’s delivery in 1969.

As of December 2020, only two ciphers were left to be solved. They are considered unbreakable, but French engineer Fayçal Ziraoui believes he may have cracked them. 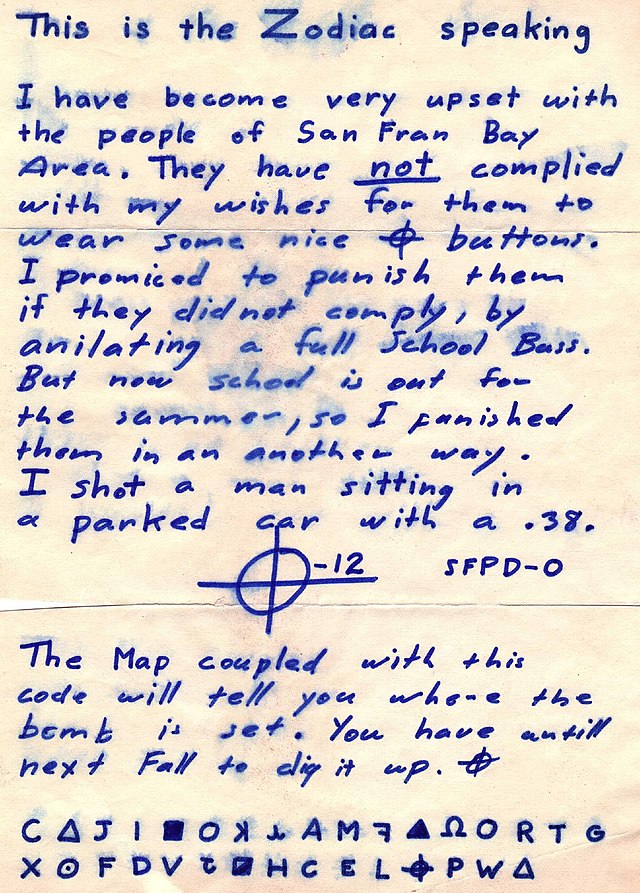 He set to work decrypting the ciphers after reading about the Zodiac Killer in a magazine. Using the encryption key used to break Z340, he was able to decode Z32, which allegedly reads, “LABOR DAY FIND 45.069 NORT 58.719 WEST.” The numbers are thought to be coordinates based on the earth’s magnetic field, and when searched pinpoint a school in South Lake Tahoe.

It’s Ziraoui’s belief his decoding is correct, given the contents of the cipher’s accompanying letter. In it, the Zodiac threatened to blow up a school bus and provided an annotated map of Mount Diablo. Authorities in 1971 also received a postcard from the Zodiac postmarked from the populous community. 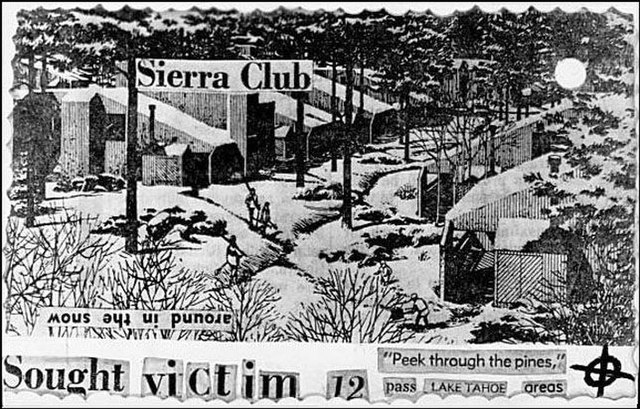 The Z13 cipher was sent to the Chronicle in 1970, and its note featured the phrase “My name is -.” It proved to be a jumble of letters, from which Ziraoui was able to pick out “K A Y R.” It’s believed the letters refer to Lawrence “Kane” Kaye, who’s thought by many to be the Zodiac.

While never officially named a suspect, he is the primary person of interest of retired police officer Harvey Hines. He resembles the composite sketch circulated by police after the Stine killing, and he was picked out by Kathleen Johns as the man who kidnapped her and her daughter. He also had an extensive criminal record.

Despite his excitement over his potential decoding of the ciphers, Ziraoui has been met with backlash online. When he shared his findings to a Zodiac Killer forum in January 2021, he was ridiculed by users. One moderator went so far as to delete his messages from the board altogether.

Undeterred by the online reaction, Ziraoui sent his findings to the San Francisco Police Department and the FBI. Neither agency has commented on the accuracy of the deciphered codes, citing the ongoing nature of the investigation.