The Grand Duchess Who Was Able To Escape The Bolsheviks

For a century, the murders of the Romanov family by the Bolsheviks have captured the attention of people around the world. It seems unfathomable that a complete royal family could be killed in cold blood. Several individuals have claimed to be members of the Romanov family who were able to survive the execution. However, there was one member of the Romanov family who was able to survive the Bolshevik revolution and lived her days out quietly in Canada. Grand Duchess Olga Alexandrovna of Russia was the last direct link to Imperial Russia and perhaps the only member of the Russian aristocracy to excel in farming.

Who is Grand Duchess Olga Alexandrovna? 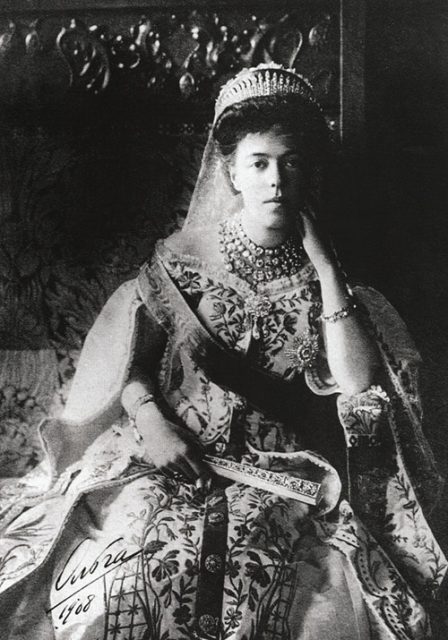 Grand Duchess Olga Alexandrovna’s birth was announced with a 101-gun salute when she was born at Saint Petersburg’s Peterhof Palace in 1882. She was both the daughter of and the sister of the Russian Czar. Olga was the youngest daughter of the five surviving children of Emperor Alexander III of Russia and Empress Marie Feodorovna. Her older brother Nicholas would become Czar Nicholas II, the last emperor of Russia, when her father unexpectedly passed away in 1894. Olga was only 12 when he died.

Later, when Olga reflected on her older brother’s ascension to the Russian throne, she believed that “Nicky” was “wholly unfit to reign. He had been trained as a soldier when he should have been taught statesmanship.”

While Olga was growing up, she was close to her nieces including Grand Duchess Anastasia, and she would often help throw lavish parties for the young royals. She rubbed elbows with the infamous Grigori Rasputin, but according to Olga, “he was neither as impressive nor as exciting as people think. He was just a strannik.” (Strannik is Russian for pilgrim or wanderer). 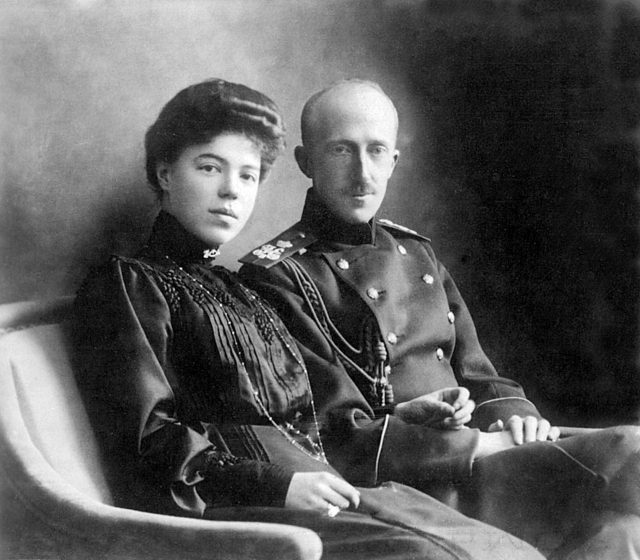 Because Olga was stuck in a joyless marriage, she sought happiness elsewhere. She had an affair with a Russian cavalry officer named Nikolai Kuikovsky, which lasted for several years. Finally, in 1916, Olga’s brother Nicholas II granted her a divorce from Peter Alexandrovich, and she was free to marry Nikolai Kuikovsky. The annulment of Olga’s marriage would be one of the last acts Czar Nicholas II passed as Emperor of Russia.

World War I and the Bolshevik Revolution 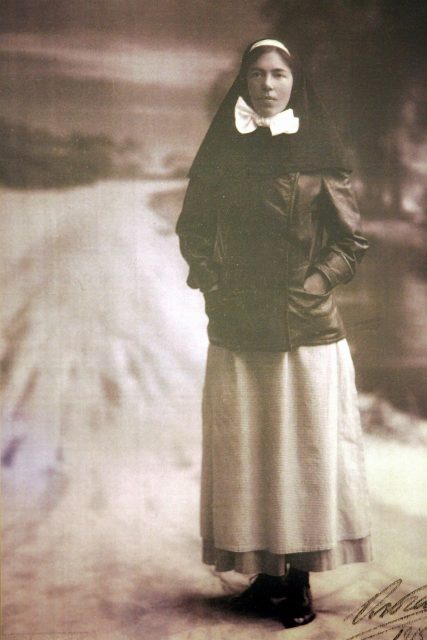 When the First World War began, Olga went to the front lines to work as a nurse for a Red Cross hospital. She worked so closely to the front that she often found herself under Austrian fire. She was awarded the Order of St. George by General Mannerheim, who would later become the President of Finland.

Olga was still working as a nurse in 1917 when the Russian Revolution forced her brother Nicholas from power. It was then that Olga and her second husband Nikolai decided to flee by train but were intercepted between Yalta and Sevastopol in Crimea. Along with Olga’s mother, The Dowager Empress Maria, the couple was put under house arrest in Crimea.

On July 17, 1918, Olga’s brother Nicholas II and his wife Alexandra, along with their five children, were executed by the Bolsheviks in a basement in Yekaterinburg, Russia. These executions brought an end to the Romanov dynasty that had ruled Russia for 300 years. Olga escaped execution because the Communist headquarters located in Yalta and the Communist headquarters located in Sevastopol could not figure out whose responsibility it was to kill them. Before the two headquarters could figure it out, they were kicked out of Crimea by the invading Imperial German Army, who in turn surrendered the port to White Russian loyalists. 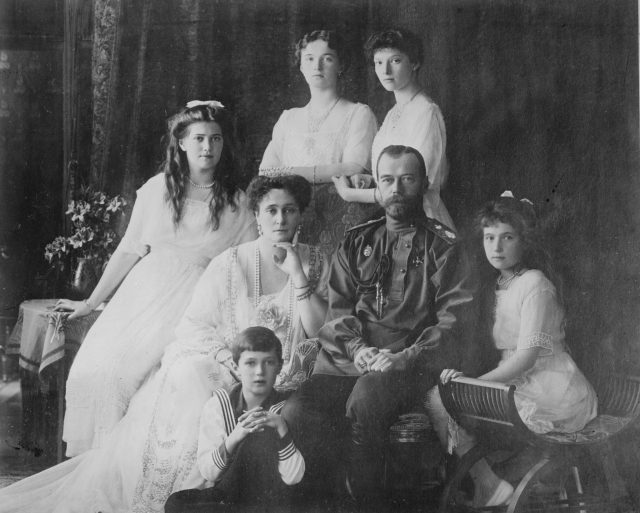 Czar Nicholas II, who was the older brother of Grand Duchess Olga Alexandrovna, and his family sit for a portrait circa 1910. The entire family was killed by the Bolsheviks on July 17, 1918. (Photo Credit: Buyenlarge/ Getty Images)

Initially, Olga and Nicholas refused to leave Russia and felt they could ride out the Russian Civil War that consumed the country and moved to the Caucasus. However, when it became clear that the Bolsheviks would be victorious in the Civil War, Olga, Nikolai, and their two sons fled to Denmark.

Once safely in Denmark, the family reunited with Olga’s mother, and together they lived in Copenhagen at the Hvidøre House until Dowager Empress Marie passed away in 1928. Olga and her family then moved to a farm in Ballerup. Olga and her family resided here until the end of the Second World War when Soviet troops occupied the Danish island of Bornholm. Worried about her family’s safety, Olga and Nikolai moved their family to Canada. 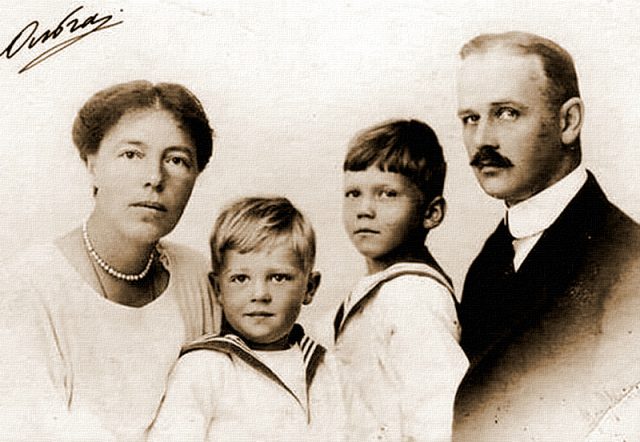 On June 2, 1948, Olga and her family left London, England aboard the Empress of Canada to start their new lives. The family purchased a 200-acre farm near Campbellville, Ontario, about 50-miles west of Toronto. Canada is not for everyone, especially during the harsh winters, but the Grand Duchess felt at home there, saying “the vast open spaces remind me of Russia, and gave me a feeling of comfort.”

During her time on her farm, Olga helped tend to the animals they kept and took up painting in her spare time. In 1951, her water-color paintings were exhibited at Eaton’s Gallery in Toronto. 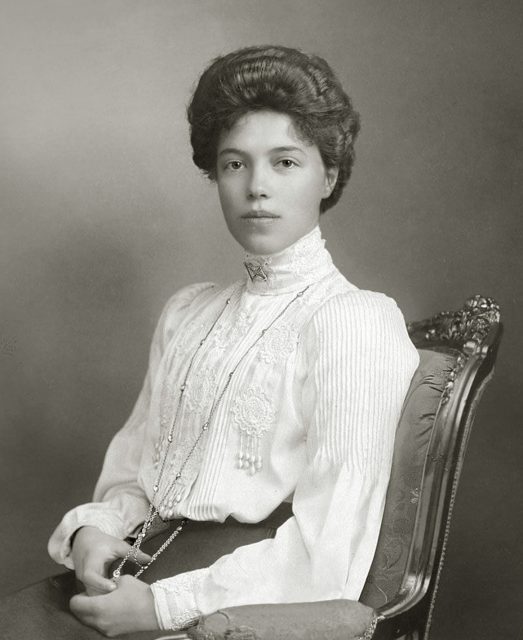 Even though Olga had been born into one of the wealthiest families in the world, she lived modestly in Canada and had no illusions that she would ever return to her old, royal lifestyle. In fact, according to Patricia Phenix, who is an Olga Alexandrovna biographer, Olga would often let her neighbors’ children play with her Faberge figurines worth thousands of dollars each.

In 1952, Olga and Nikolai moved into a smaller five-bedroom house in Cooksville, now in Mississauga Ontario. By this time, both of Olga’s sons had moved to Toronto for work and it was becoming harder and harder for Olga and Nikolai to keep up with the many demands of the farm. Olga, who remained in touch with many of her royal relatives, would come to host unofficial dignitary visits at this 5-bedroom home. In 1954, Princess Marina, Duchess of Kent, visited Olga at home between her royal engagements, and in 1959 she was visited by Louis and Edwina Mountbatten. 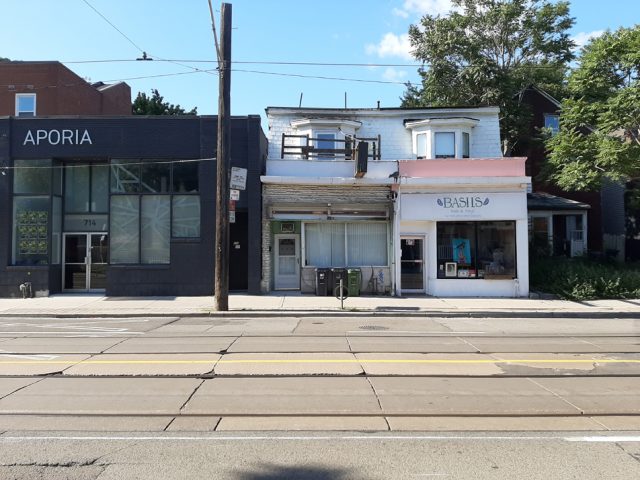 Apartment in Toronto where Olga spent the last year of her life. (Photo Credit: Wikimedia Commons)

In June 1959, Grand Duchess Olga would once again get a taste of the royal life when she was invited by Queen Elizabeth ( her first cousin twice removed) and Prince Phillip (first cousin once removed) for lunch on board the Britannica. The British monarchs were on a Canadian tour and were stopping in Toronto, only a short distance away from Olga’s home. Olga had to be encouraged by her friends and family to go out and buy a new outfit for the occasion. When half the town showed up before her lunch she stated, “all this fuss, just to go see Lizzie and Phillip!”

More from us: Last of the Tsars – The Vicious Final Night of the Romanov Family

Nikolai passed away in 1958. After the passing of her husband, Olga removed herself more and more from society. In April 1960, Olga was admitted to the Toronto General Hospital and diagnosed with cancer. She spent her last months in the home of a Russian immigrant family she had befriended in an apartment located above a beauty salon in Toronto. Olga passed away on November 25, 1960. Although her story isn’t as well known as the rest of her family, Olga constantly overcame adversity and made the best out of every situation she found herself in.

« What Happened To Ozzie, Harriet, And The Gang After The Adventures Ended?
Authors Who Really, Really Disliked The Film Adaptations Of Their Books »