Kermit The Frog Addressed Congress And Other Amazing Muppet Facts

An English Heritage blue plaque has just been unveiled at what was once Jim Henson’s London home ahead of what would have been his 85th birthday.

Although The Muppet Show was set in a New York theater, the series was actually shot in Britain since no American production companies bought into the idea. But Sir Lew Grade was willing to give Jim Henson’s Muppets a chance after seeing just how popular other puppet shows of the era had been, such as those made by Gerry Anderson.

Below are some more amazing Muppet facts that you might not know.

Sam and Friends was the beginning 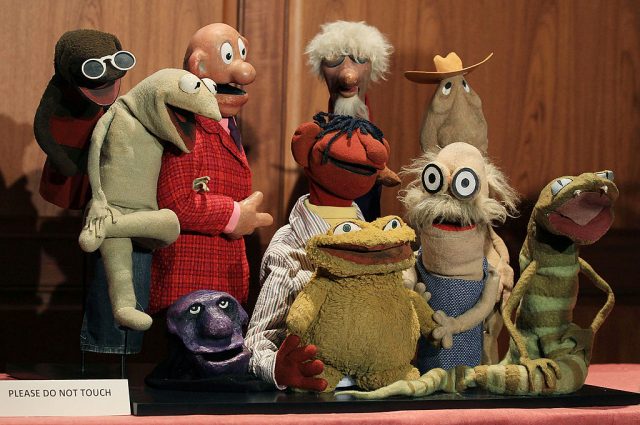 Before there was The Muppet Show, there was Sam and Friends. This was another puppet show created by Jim Henson, and it starred an early version of Kermit the Frog. Sadly for Sam but lucky for us, the show only ran from 1955 to 1961.

Kermit was created out of an old coat belonging to Henson’s mother. His eyes were two halves of a ping-pong ball.

The Muppets were booted off Saturday Night Live 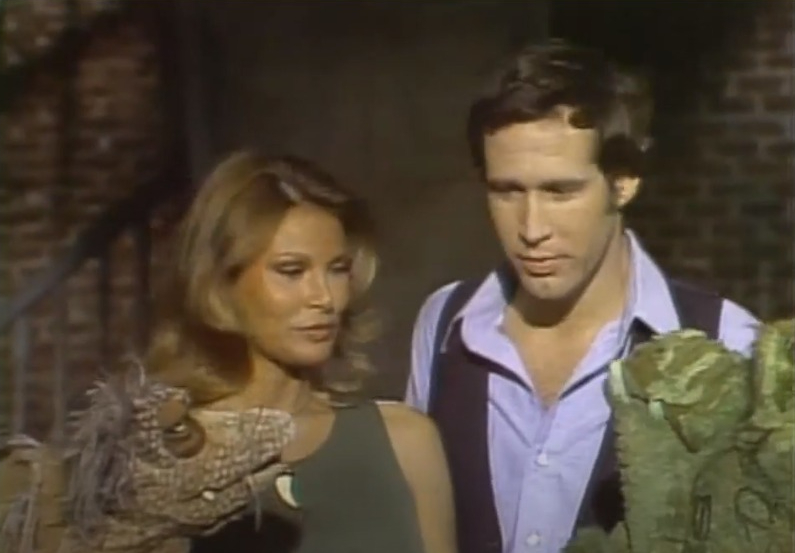 When Saturday Night Live first began, Henson secured a weekly slot for his puppets. Wanting to distance himself from the Sesame Street crowd and being forever associated with kids’ TV, Henson created a new set of puppets that lived in the Land of Gorch and dealt with adult issues.

From the beginning, it was clear the partnership wouldn’t work. The Gorch scripts were written by the SNL writers, and they just couldn’t get the right fit for the puppet sections. As Frank Oz once stated: “They had their style, we had ours.”

The human performers of SNL hated the Muppets taking airtime off them, so much so that John Belushi ended up calling them the “mucking Fuppets.” 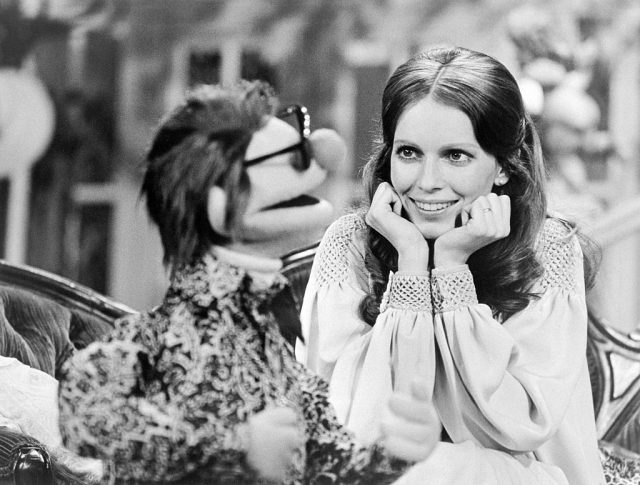 Before the Muppets got their weekly show in England in 1976, there was a one-off American TV special called (no kidding) The Muppet Show: Sex and Violence which aired in 1975. The “special guests” were the Seven Deadly Sins.

This show and a Valentine special were created in the hope that American TV stations would pick up a full series. When that didn’t happen, Jim Henson approached Sir Lew Grade who gave him his own show on British television. By December 1976, 14 million people were tuning in for each episode of The Muppet Show.

Since then, The Muppets have won four Emmys and got their own Hollywood star 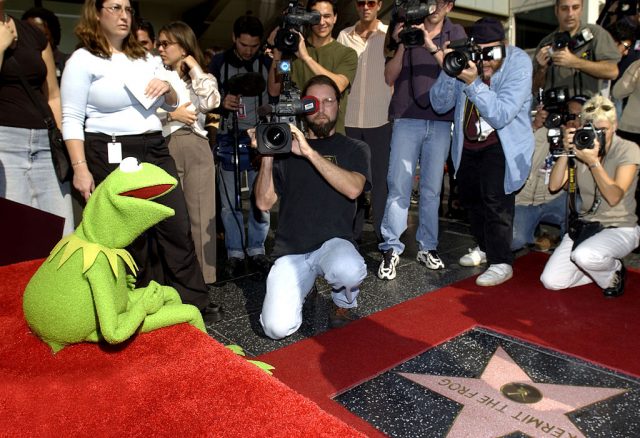 International television and movie star Kermit the Frog poses for the news media after receiving a star on the Hollywood Walk of Fame on November 14, 2002 in Hollywood, California. (Photo Credit: Vince Bucci/Getty Images)

The Muppet Show ran in the UK from 1976 until 1981. After that, it found syndication in the United States. It proved so popular that it was nominated for several Emmy awards over the years, winning four of them.

It was also nominated for nine BAFTAS, winning three, and also earned a star on the Hollywood Walk of Fame in 2012. Kermit got his own back in in 2002!

Kermit the Frog holds a doctorate and once addressed Congress

It’s true! In 2008, Kermit appeared alongside the Association of Zoos & Aquariums in Washington, D.C. He was advocating for endangered amphibians everywhere.

In another surprising accolade, Kermit was awarded a Doctorate of Amphibious Letters from Southampton College in New York in 1996. He received it for his work in promoting environmental awareness.

Rowlf was the biggest star of them all 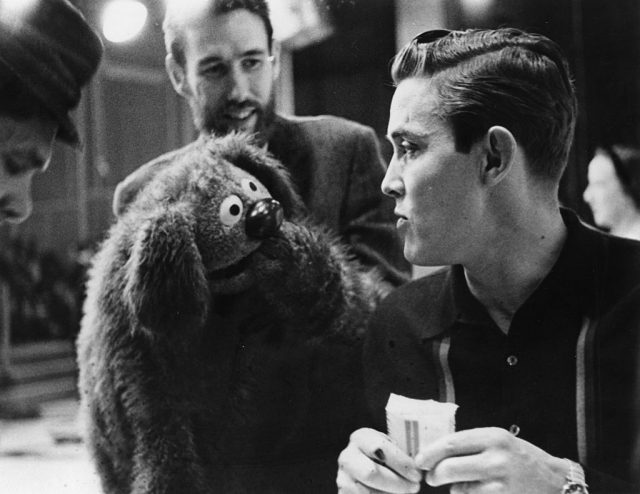 Muppets creator Jim Henson, (beard, background), manipulates one of his creations as it engages in conversation with singer Jimmy Dean in 1963. (Photo by Michael Ochs Archives/Getty Images)

Sorry, Miss Piggy, but you haven’t got half the following of Rowlf. This adorable and talented dog was one of the first Muppets produced by Henson when he was working in commercials in the 1960s.

Rowlf was created for Purina Dog Chow advertisements in 1962, but he went on to appear on The Jimmy Dean Show from 1963 to 1966. He was so popular, in fact, that he got more fan mail than Dean.

However, Miss Piggy has appeared on magazine covers, had her own line of make-up, and was a New York Times bestseller 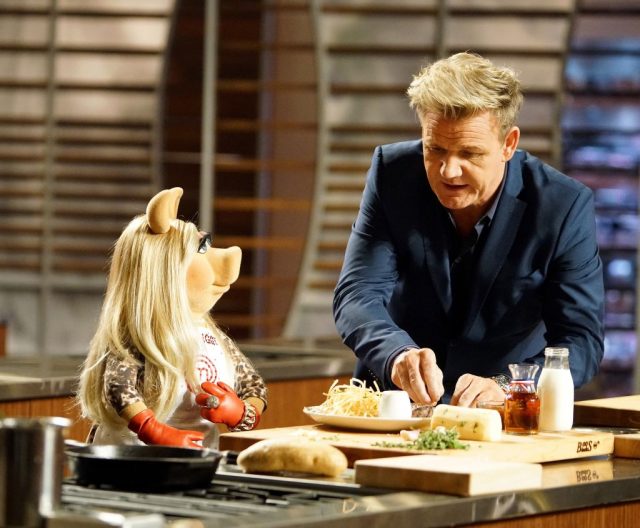 Miss Piggy has graced the cover of several magazines over the years. Perhaps the most prominent one was Life in 1980, where the headline proclaimed “Miss Piggy for President!”

Her book, Miss Piggy’s Guide to Life, was published in 1981 and stayed on the New York Times bestseller list for an astonishing 29 weeks.

Rowlf had no voice after Jim Henson passed away 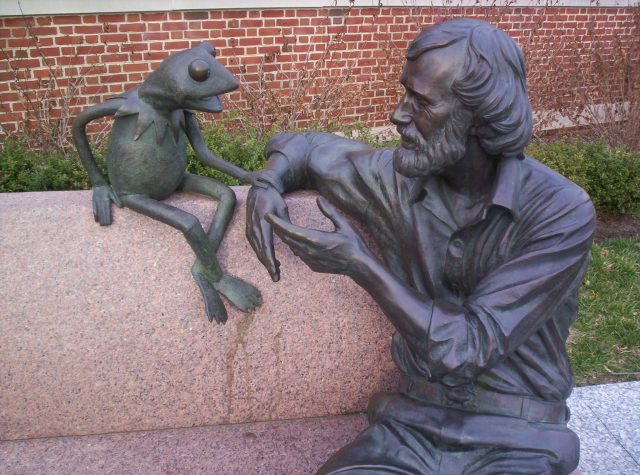 Jim Henson provided many voices for different characters on The Muppets. After Henson died, many of the Muppets got new voice actors, but no one could bring themselves to voice Rowlf. It was felt that Rowlf was the Muppet that most embodied Jim Henson himself. Although Rowlf appeared in The Muppet Christmas Carol and Muppet Treasure Island, he didn’t have a speaking role.

Incidentally, Muppets Tonight was also hosted by Clifford rather than Kermit, because Jim Henson had requested that after he passed away, no future Muppet show would be hosted by Kermit. 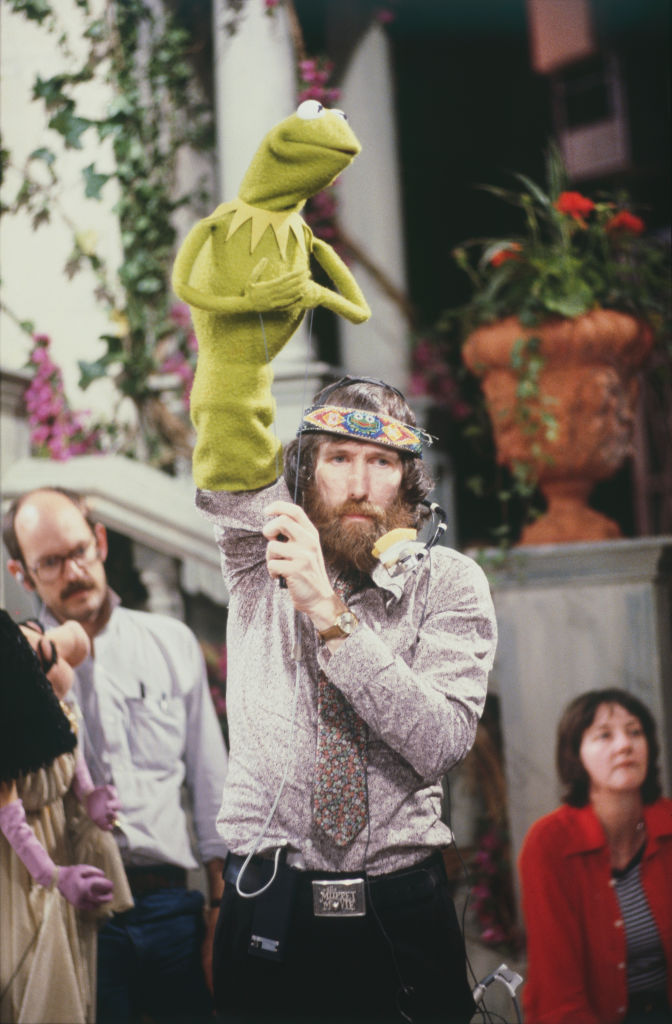 Jim Henson, the creator and producer of the television program The Muppet Show, with Frank Oz in the background. (Photo Credit: Nancy Moran/Sygma via Getty Images)

Puppeteer Frank Oz was widely known as Jim Henson’s right-hand man. The two worked together on both The Muppets and Sesame Street, but despite being one of the most profound puppeteers in Hollywood, he hasn’t worked on The Muppets since 2007. Why? Disney hasn’t asked him. In an interview with The Guardian, Oz revealed that after Disney acquired The Muppets, he hasn’t been asked because he believes “They don’t want me because I won’t follow orders and I won’t do the kind of Muppets they believe in.”

Oz has not shied away from his feelings about Disney in general. In the same interview, Oz claimed the impending deal with Disney “is probably what killed Jim. It made him sick.” The deal didn’t happen during Henson’s lifetime but it’s no surprise Oz has respected Henson’s legacy after the fact.

Everyone wanted to be on The Muppet Show – after Rudolf Nureyev 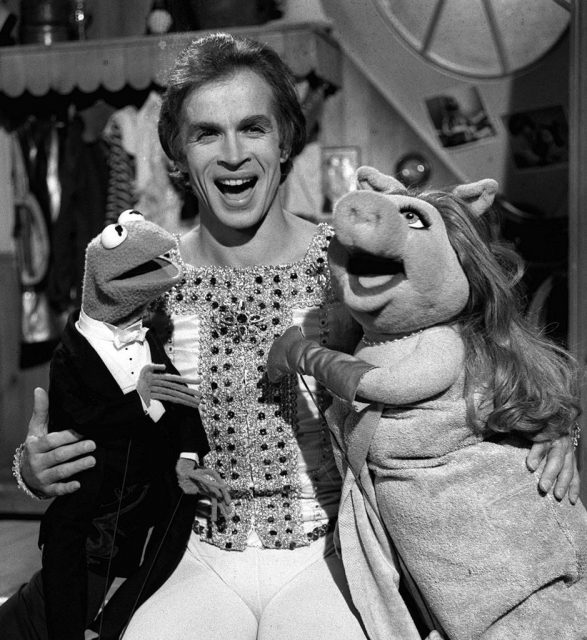 However, in the beginning, the producers really struggled to attract guest stars. Joel Grey and Vincent Price were already fans of Jim Henson and were happy to be invited. But it was only after the renowned ballet dancer Rudolf Nureyev appeared that celebrities began to take the show seriously as good publicity. 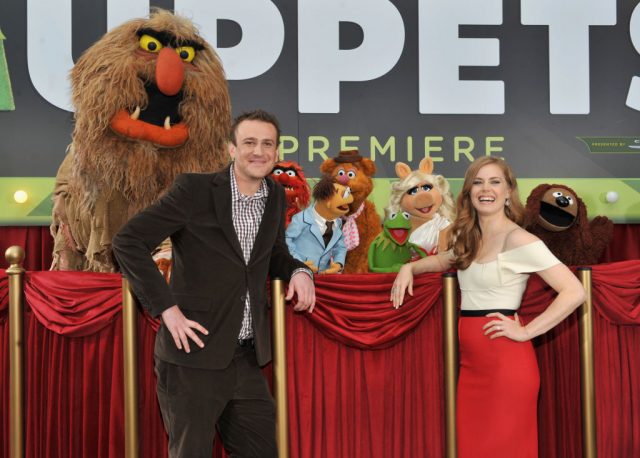 In the movie The Muppets (2011), Amy Adams stars as Jason Segel’s girlfriend. Segel was set on Adams taking the part from the first, and to ensure she accepted the role, he recruited the help of his Muppet co-stars.

In an interview with Collider, Amy Adams said: “Jason sent me a DVD where he and Kermit were inviting me to be part of ‘The Muppets.’ It was really cool. Once Kermit asks you to do something, it really is hard to look at him and said, ‘No.’”

Guests could choose their own Muppets 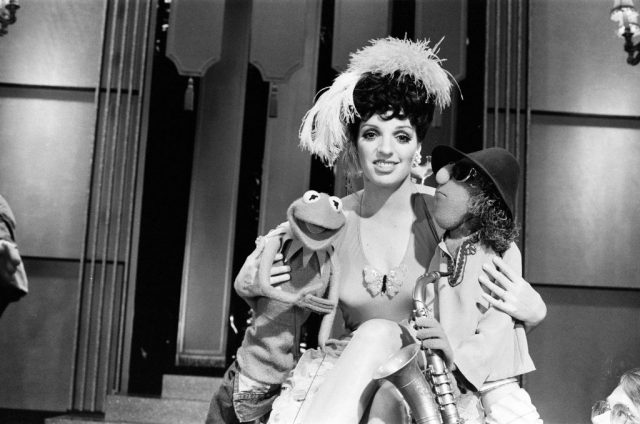 Liza Minnelli with The Muppets – her favourite pair are Kermit and the saxophone playing Zoot who she was photographed with today (Photo Credit: Doreen Spooner/Mirrorpix/Getty Images)

When invited to appear, guest stars were asked which Muppet was their favorite and were given a scene with them. Miss Piggy and Animal were the most requested, but the writers loved it when stars requested a lesser-known Muppet as they could write fresh and interesting material.

Up until the third episode, a special Muppet was made to represent each guest star. This individualized Muppet appeared on stage at the end along with the guest, but this idea was soon scrapped.

And finally… virtually all of the Muppets are left-handed 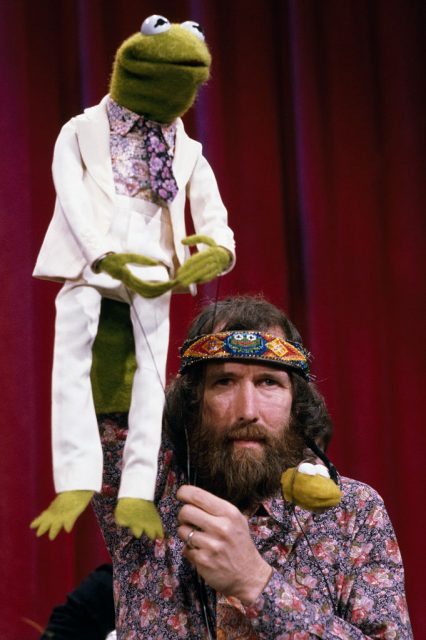 Jim Henson is the creator and producer of the television program The Muppet Show, starring Kermit the Frog. (Photo Credit: Nancy Moran/Sygma via Getty Images)

Most people in the world are right-handed, but if you watch the Muppets, you’ll see that many of them are left-handed. The two facts are connected: since most puppeteers are right-handed, they use that hand to control the mouth, which needs more dexterity to tie the movements in with the spoken words. This leaves them with their left hand free to operate the Muppet’s left arm.

But while the puppeteer now has both hands occupied – there’s still another Muppet arm to animate. That’s where “right-handing” comes in, and many of today’s Muppet performers started out by “right-handing” a puppet.

The Swedish Chef and Rowlf were two Muppets that required two working hands. The Swedish Chef was controlled by Jim Henson and Frank Oz, while Rowlf’s hands were often those of a qualified pianist, so that it looked like he was actually playing the notes from the soundtrack.