Caravans are cumbersome and campervans guzzle gas – but for those who still want to drive somewhere for a night under the stars, then what you need is a car roof tent.

Take a look below at how this remarkable vehicular add-on has developed through the ages.

A craze for rooftop tents seems to have started around 1937, as indicated by an article in Popular Science of January that year.

With the headline “Car Top Carries Collapsible Tent,” the article describes how “a comfortable shelter with sufficient room for two sleepers” is stored in “a compact unit barely a foot high.” 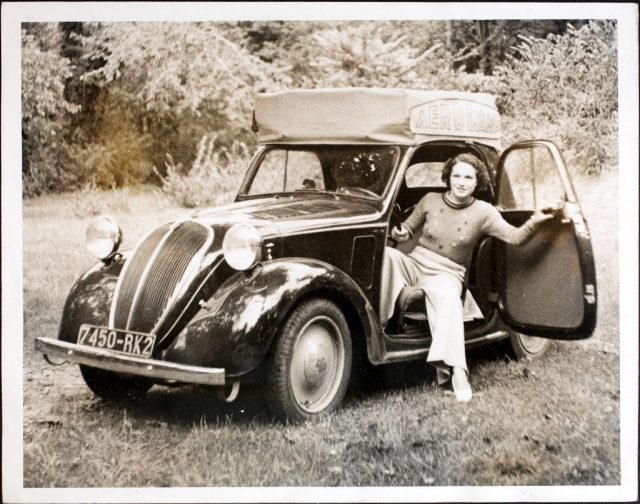 A Paris firm has placed on the market a ‘Sleep-on-your-Car-tent’, which is carried in a container on the roof of a car whilst on holiday. It is easily erected, and two can sleep in comfort without fears of having erected the tent on an ant-hill. The tent fits snugly over the roof of the car, as demonstrated. (Photo Credit: Hulton Archive/Getty Images)

The front frame could be unfolded to serve as a ladder. 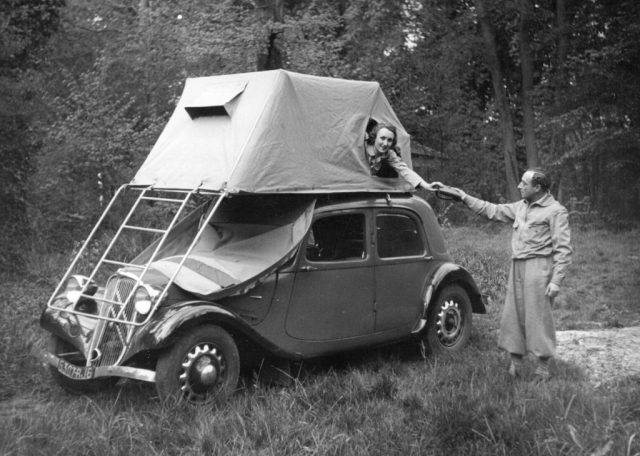 Circa 1950: A tent that balances very neatly on top of a car. (Photo Credit: Hulton Archive/Getty Images)

One manufacture that really got on board with the idea of rooftop tents was the Italian company Autohome. Their first roof tent to hit the market in 1958 was called the Autocampeggio Stogl. Turning a handle could raise a tent in just 20 seconds!

A folding fabric tent was designed by Giuseppe Dionisio, who obtained a patent for it in 1959. It was known as “Air-Camping,” and one professional photographer named Nino Cirani has used an Air-Camping tent for over 30 years.

When he met Dionisio in 1964, he said: “I have a taste for perfection, and would like my roof top tent to be suitable for photographic purposes.’” 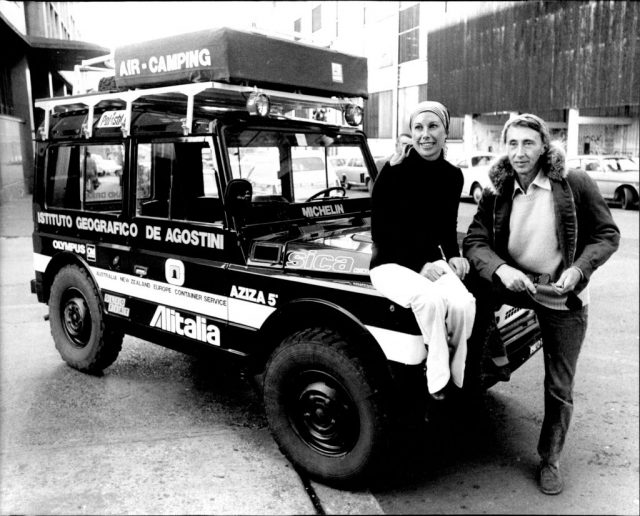 While Cirani liked to attach his tent to a Land Rover to take him off-road, roof tents can be fitted to pretty much any vehicle.

These are some of the earliest examples of car roof tents, dating from the 1930s: 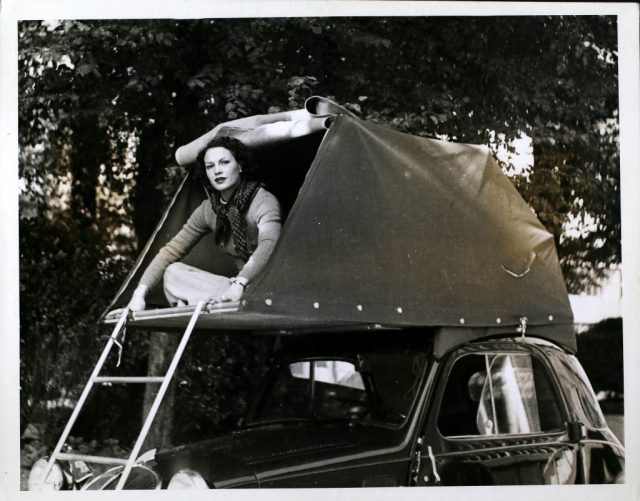 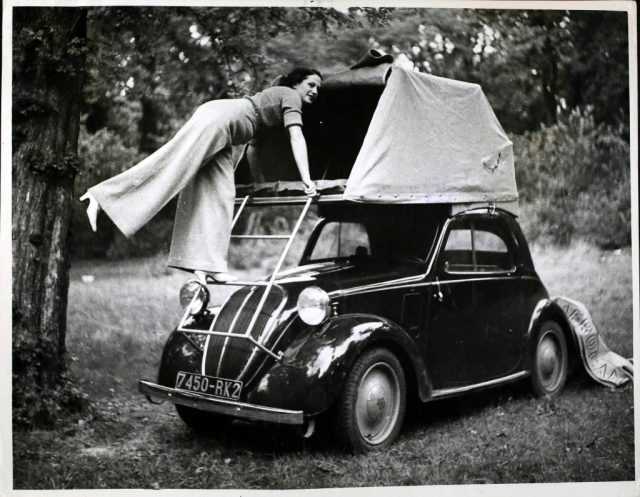 The craze was still going strong in the 1950s, as shown by these pictures of British actress and model Marigold Russell, posing next to the Roofsleeper tent designed in Hampshire. 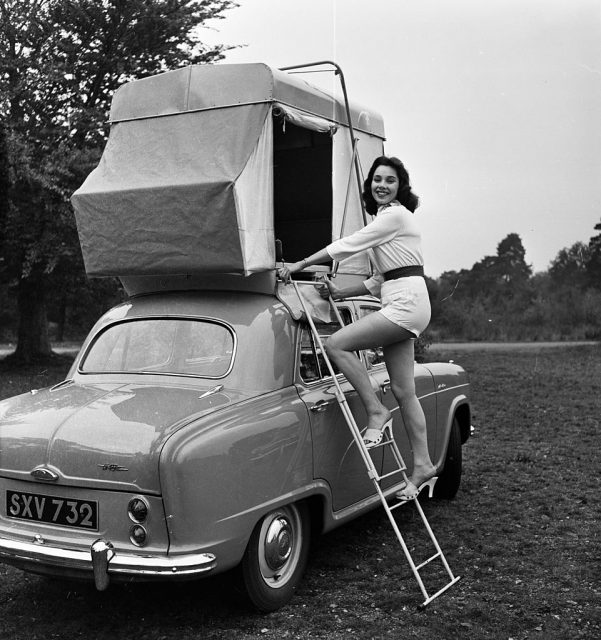 This photo from the International Caravan Exhibition in 1961 shows that it is possible to get two people inside a rooftop tent. 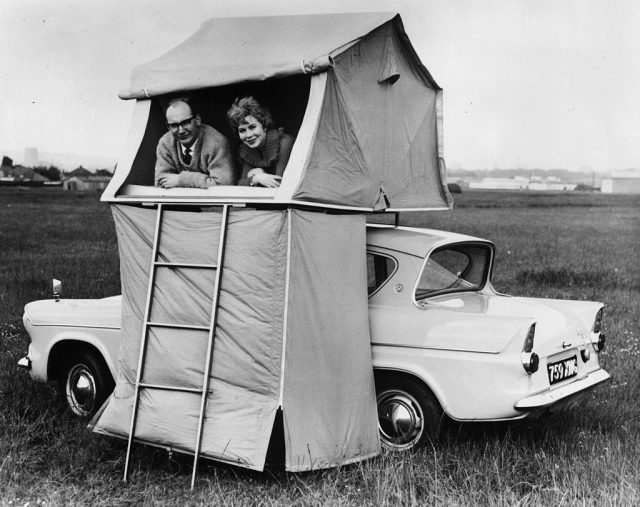 20th September 1961: A ‘Trotent’ which will be on show at the International Caravan Exhibition at Earl’s Court, London. Supported by the roof of a car, the tent sleeps two and there is a ‘ground floor’ apartment for dressing or use as a loggia. (Photo Credit: Keystone/Getty Images)

In this picture from 1960, The Roof Tent is attached to an Austin A40. 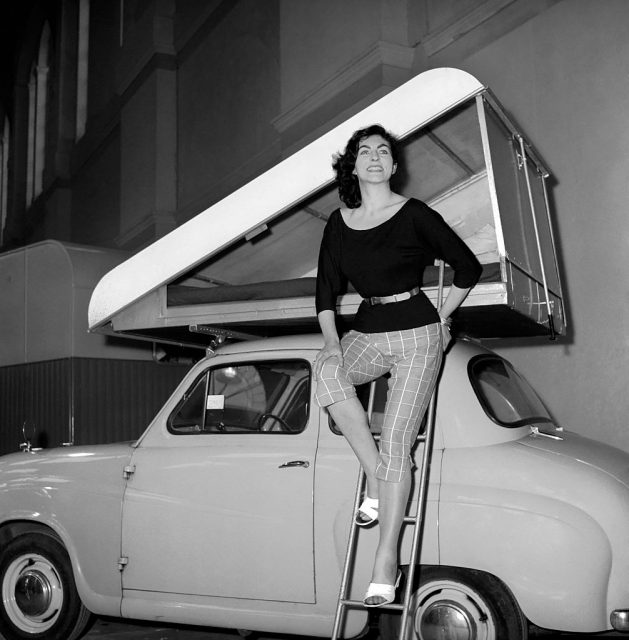 As well as being a great option for tourists and explorers, as festivals became more widespread, a roof tent could be an excellent option for festival-goers as well.

The Trabant (also called the Trabi) is an iconic car produced in former communist East Germany. Production ceased in 1989, but enthusiasts still come together to share their love of this car, and a Trabant gathering is a great place to spot roof tents, such as this picture from August 2015. These vintage roof tents are still as usable today as they were back when they were built. 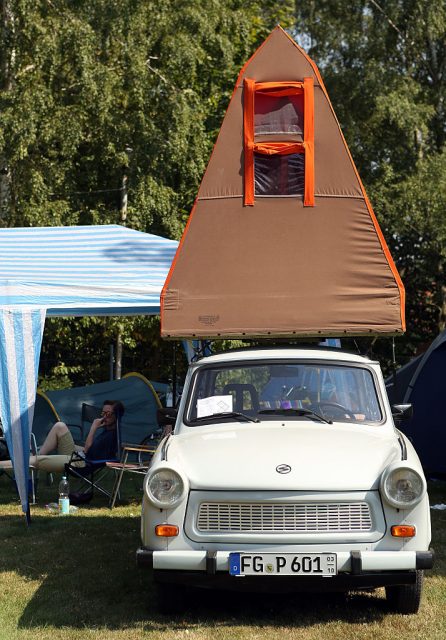 If you’ve got a vintage car that you want to take to a rally, then attaching a roof tent to it is a great way to ensure you can stay onsite for the duration of the event. In this picture, a vintage car owner has attached a tent to the roof of his Citroen 2CV. 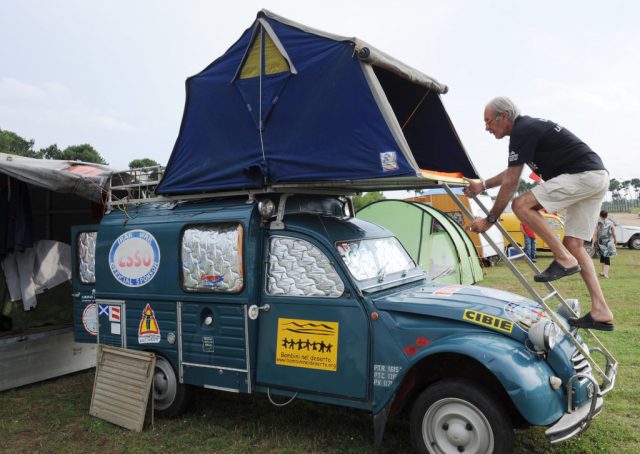 Although they might look quaint, rooftop tents continue to be a popular travel option today, with new models being produced each year. Cars with roof tents are still used by those wanting to get off the beaten track. Roof tents also offer a fun, alternative option for getting away from it all.

And you needn’t leave any luxuries behind if you attach it to a van or a trailer. 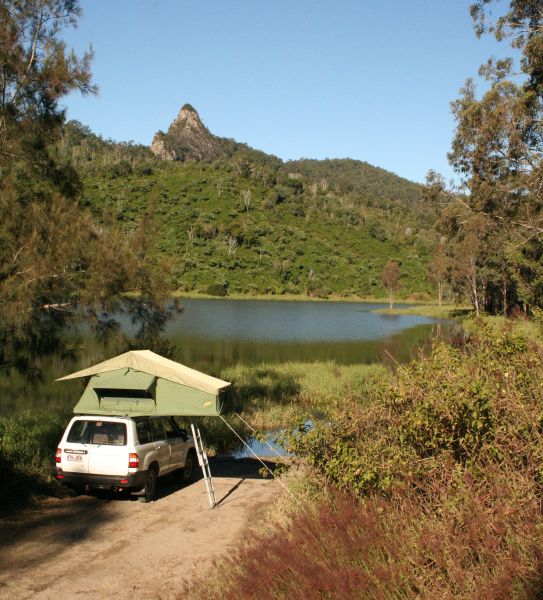 Whether you’re a tourist wanting to avoid costly hotel fees, a fan of vintage cars, or an avid explorer, it’s likely that there’s a car roof tent out there for you somewhere.