Pirates are a famously lawless bunch. It’s not that they lack discipline, of course. Step out of line in the pirate community, and you soon know about it.

Failing to keep your weapons in good order… Aggressive behavior toward crewmates… Sullying the ship with a woman’s presence, of all things! These could all land you in hot water. Well, cold salty water at any rate.

Punishments for breaking the code are enforced with brutal efficiency… and, in some cases, sadistic pleasure! Here are six of the best from the late 17th/early 18th century, a period otherwise called the Golden Age of Piracy… 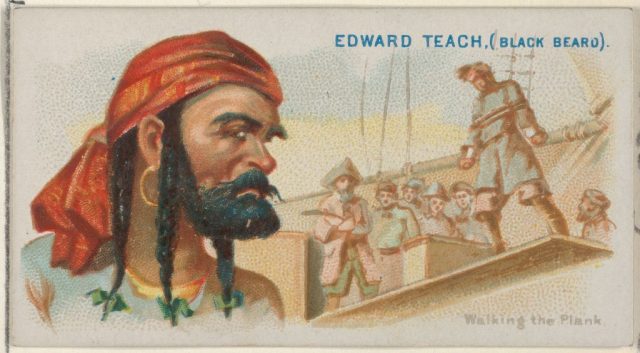 Let’s start by shattering a timbers-shivering myth. Many an unfortunate soul has been seen walking the plank in a pirate movie, or other ocean-going tale. Truth is, the pirates themselves didn’t much care for it.

History writes that the seafaring scoundrels were “fonder of equally unpleasant punishments.” We’ll hear more about those shortly. Meanwhile, the article adds: “if they ever did want to drown somebody, they probably just threw them over the side of the ship.”

So how did walking the plank get lodged in the public consciousness? They trace the English origins back to A General History of the Pyrates, written in 1724 by Daniel Defoe.

He described a ladder instead of a plank. The image of a length of wood came later, via classics such as Treasure Island by Robert Louis Stevenson (1884).

Wrath of the cat 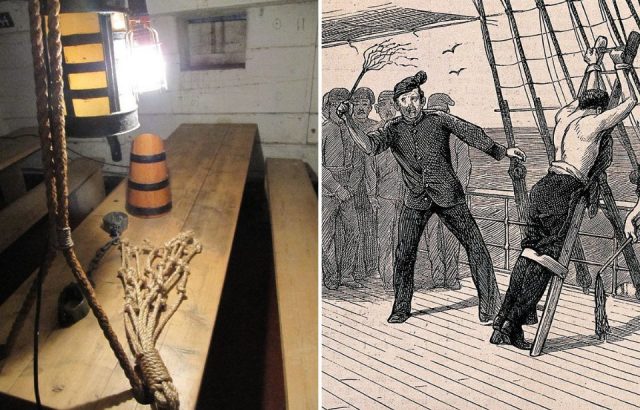 The Cat O’Nine Tails wasn’t some furry fantasy creature of the deep. It was actually a brutal weapon used to lash out of control sea dogs.

Pirate Attack writes it was typically an “unwound rope whip of nine strands.” That partly explains the name. Where does the feline connection come from?

Different ends hosted different ways of punishing a pirate’s back. There were “tarred knots, and sometimes fish hooks or musketballs.” The poor crew member looked like he’d been savaged by a kitty, and the description appears to have stuck.

The horror continued, however, as the wounds were then “covered with salt and vinegar” for extra stinging sensations. In a word… ouch! Pirates wielded the cat o’nine tails but it wasn’t exclusive to them. The British Navy had a bunch on standby also!

Flogging in general was known to be meted out to salty transgressors. It doesn’t appear to have been a popular punishment, though. World History Encyclopedia states that captains “rarely dared to use such methods.”

How come? Well, piracy attracted all manner of people who’d been cast adrift from so-called respectable society, including the navy. Naval commanders ordered floggings on a regular basis. So escapees became pirates “in order to escape such harsh features of a life at sea.” Most interestingly of all, flogging became a group decision. 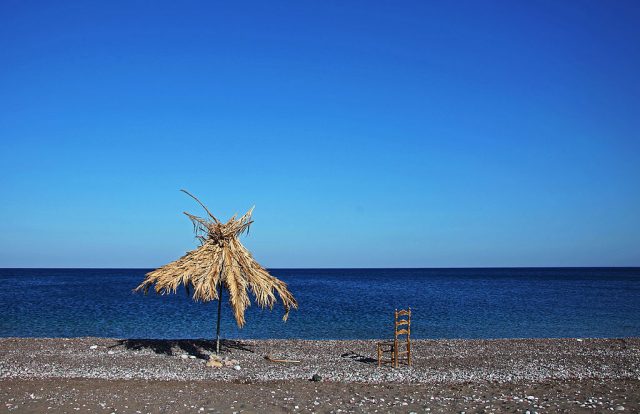 You may have seen some of these punishments on display in the Pirates Of The Caribbean film franchise. One of the most memorable sequences was Captain Jack Sparrow and company being marooned.

It was a far from violent way of conducting business (unless you wound up on an island of angry natives we guess), but it certainly gave the victim time to think about what they did wrong.

Talk about abandonment issues! The Pirate King mentions that you might also be marooned without a stitch to wear. Pretty nasty stuff if the sun starts beating down. 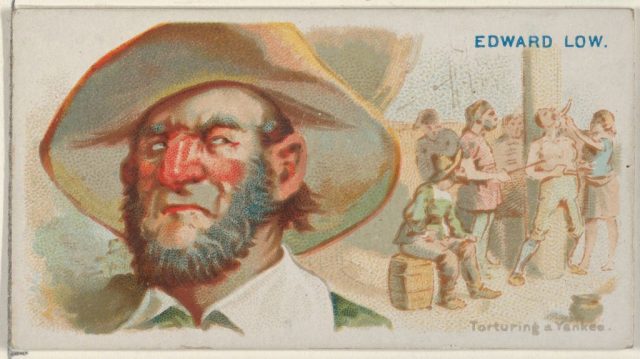 If you got on the wrong side of a pirate, you could well expect to find a cutlass in your guts before the night is out. And if you really boiled their clams, you wound up being tortured to death!

Now, the punishments revealed here in our article are torturous in themselves. But one situation you didn’t want to find yourself in was a private audience with a vindictive captain.

World History Encyclopedia notes such sweat-inducing stories as the forced consumption of body parts and other creative mutilations. Edward Low (1690 – 1724) was a particularly bad seed when it came to putting folks through the wringer.

Torture appears to have been primarily aimed either at non-pirates, or inflicted on pirates by the likes of the Royal Navy. Speaking of the latter… pirates used their pursuers’ practice of repeatedly dunking people in the sea on a rope, after hoisting them up a yardarm (mast spar). 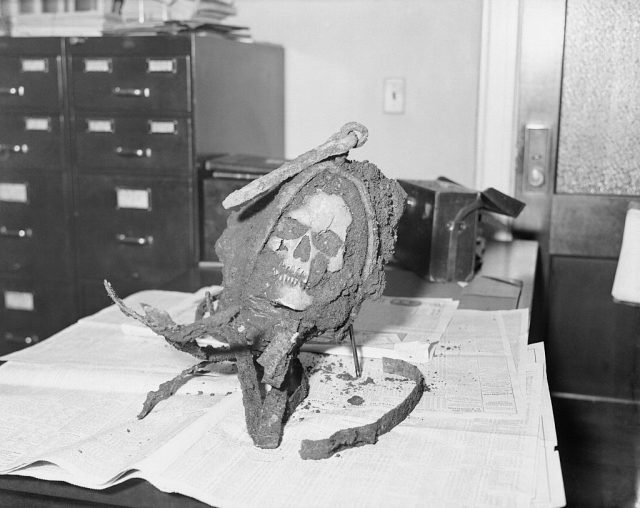 Forget the Netflix hit. Pirates played dangerous and life-threatening games. And, best of all, they took place in the vicinity of real live squid! Naturally, it was all part of the punishment process.

Unfortunate captives had to endure painful jabs with needles, swords, or whatever the crew deemed fit to prod with. While doing this, they were tethered to the mast. Pirate Attack writes that the victim would be forced to “run or ”˜dance’ around the mast,” as a nautical nasty played a tune on the fiddle.

There’s also mention of people being sealed inside barrels. Uncomfortable enough. Only these barrels are packed with cockroaches! For insect-phobes, being thrown overboard may sound preferable. 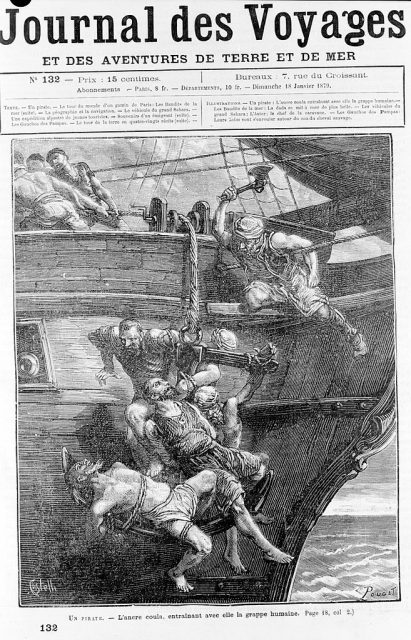 The cover of the Journal des Voyages depictes an engraving by Horace Castelli and Pouget of a group of prisoners tied to an anchor as a pirate prepares to drown them, January 18, 1879. (Photo Credit: Roger-Viollet/Getty Images)

The business of keelhauling is identified as one of the very worst things that could happen to a wayward pirate.

You would be literally hauled under the keel (or bottom of the boat), while attached to a rope. All That’s Interesting mentions how victims were “suspended by a rope from the mast.” The condemned man has “a weight attached to his legs.”

The rope is released into the drink and you find yourself face to face with the heavily-barnacled keel. Those things can be pretty sharp. It’s like being dragged across broken glass.

All That’s Interesting draws a comparison with waterboarding. Like that form of torture, keelhauling proved controversial. Measures were taken to stamp it out. However, documents from British parliament refer to “two Egyptian sailors being keelhauled as late as 1882.”

The Golden Age of Piracy 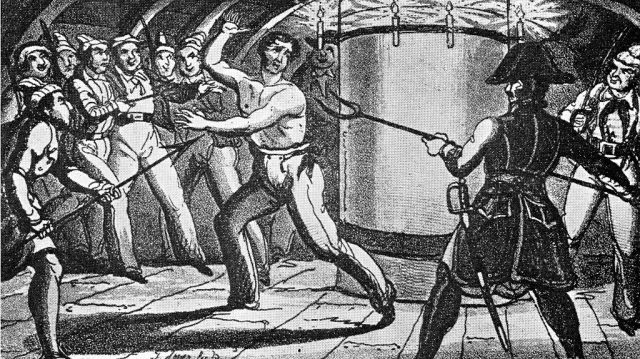 Sweating was a torture game whereby the men were to run around the third mast between decks, in a circle marked by candles, while they were pricked with knives, swords and forks etc. (Photo Credit: Culture Club/Getty Images)

Writing about this legendary period of watery history, Royal Museums Greenwich mentions questionable opportunities made available to people when signing up as a pirate.

A disreputable life on the ocean waves “not only offered them a chance to get rich quick but also a rare opportunity to exert a degree of power over others.”

More from us: 5 Female Pirates Who Ruled The Seas

It was a potentially exciting life but also one fraught with peril. As these punishments show, you had to watch your back with your employers as much as the authorities.

« Betty Lynn, Thelma Lou on ‘The Andy Griffith Show,’ Dead At 95
How Patty Duke’s Son Sean Astin Found Out Who His Real Father Was »