November 2021 marks the 20th anniversary of the release of Harry Potter and the Sorcerer’s Stone. The film was a hit, prompting Warner Bros. Studios to continue the series, which was based on the books by J.K. Rowling. To celebrate, we’ve put together a list of facts most fans might not be aware of.

The Harry Potter films were made on a tight schedule. Such constraints would be difficult for any actor, especially one looking to pursue an education alongside their career. It’s for this reason actress Emma Watson nearly quit her role as Hermione Granger. 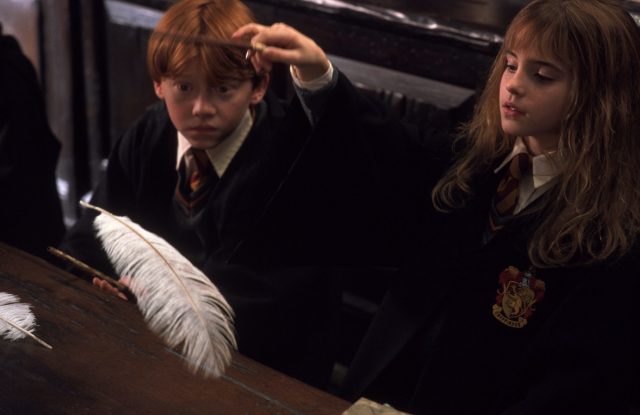 Speaking about the contract negotiations for the films, executive producer David Heyman told The Hollywood Reporter: “Emma [Watson], in particular, was quite academic and was very keen in pursuit of schooling and was wrestling a little bit more than the others. So each time there was a negotiation, it was not about a financial [matter], it was really about, ‘Do I want to be part of this?'”

Watson chose to stay for the remainder of the series, and later went on to attend Brown University.

While hunting for Voldemort’s Horcruxes during Harry Potter and the Deathly Hallows: Part 1, things got a bit tense between Harry Potter and Ron Weasley. This resulted in Ron leaving him and Hermione, only to return in time to prevent Harry from drowning in an icy pond.

After rescuing Harry, Ron is tasked with destroying the Horcrux he was wearing around his neck. However, when he goes to do so, smokey apparitions appear of Harry and Hermione kissing. While this made Ron upset, the actor who played him, Rupert Grint, couldn’t stop laughing.

According to reports, Grint was laughing so much during the filming of the scene that Emma Watson kicked him off the set.

Eagled-eyed viewers of Harry Potter and the Order of the Phoenix will notice that, as the movie progresses, the school’s new Defence Against the Dark Arts professor, Dolores Umbridge, has a change in attire. Toward the beginning of the film, she’s dressed in clothes of pale, bubble-gum pink; by the end, her outfits are a more vibrant and darker shade of pink. 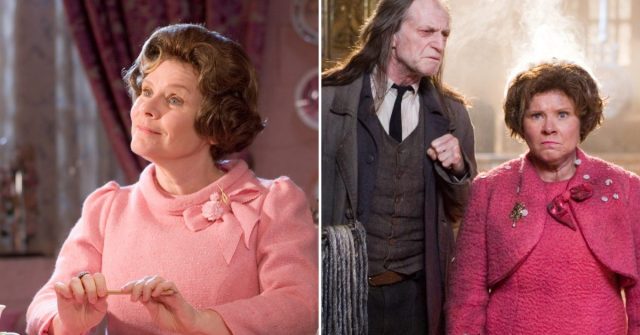 Dolores Umbridge dressed in bright pink at the beginning of the film [L] and her outfit toward the end [R]. (Photo Credit: 1. edmund1990 / MovieStillsDB 2. erminhohp2011 / MovieStillsDB)

The reason: the film’s producers wished to symbolize how horrible her behavior got as the film progressed – AKA, as she shed her “little miss nice witch and in no way a future supporter of Voldemort” demeanor.

Hooking up with fans

It’s not uncommon for actors to hook up with fans, but it’s hard to picture the cast of Harry Potter participating in such debauchery. As it turns out, that’s exactly what Daniel Radcliffe did, according to an interview he gave to the Daily Mirror. 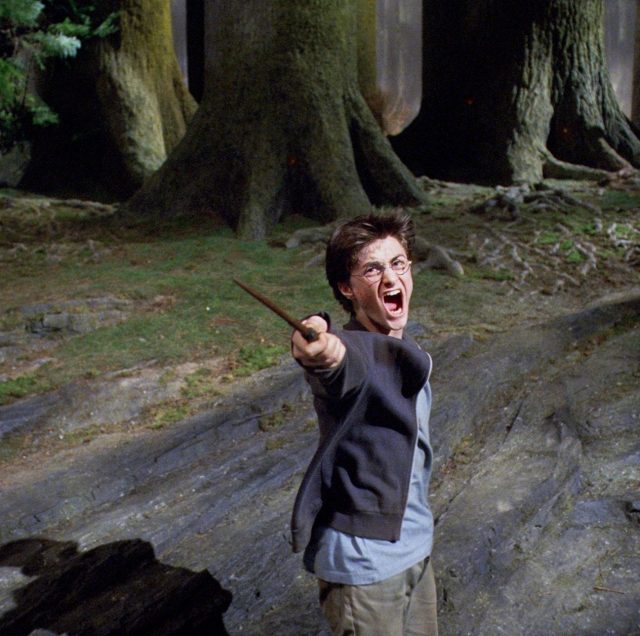 “I have… I mean, that has happened, but generally speaking, I’ve known the person,” he said. “Apart from the few times I was drinking.” Speaking of drinking, the films’ lead has since admitted to sometimes showing up to set drunk and/or hungover.

Tom Felton was punished for sneaking food on set

Draco Malfoy definitely isn’t a nice guy. Not only did he get Harry in trouble during their first year at Hogwarts by arranging a fake nighttime duel, he was a stark supporter of Buckbeak’s execution and eventually became a Death Eater. Sure, he may have received a redemption arc in the final book, but it’s hard to overlook his notorious deeds. 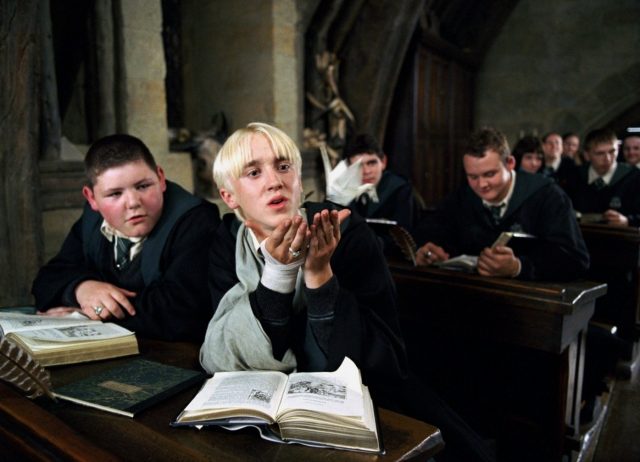 The actor who portrayed Malfoy in the films – Tom Felton – took a leaf out of his book… Sort of. While attending the Calgary Comic and Entertainment Expo, Felton admitted to having had his robe’s pockets sewn shut because he kept sneaking food onto set:

“The robes had these huge pockets,” he said. “The rumor was that they sewed them shut after the third film because I was sneaking food and drink onto set. I want to clear this up because that is absolutely true.”

Daniel Radcliffe was allergic to his contacts

Everyone brings up the fact Daniel Radcliffe didn’t have Harry Potter’s often-mentioned green eyes. What you might not realize, however, is that this wasn’t for lack of trying. Before filming began on Harry Potter and the Sorcerer’s Stone, director Chris Columbus had Radcliffe try on green contact lenses, but he ended up having an allergic reaction! 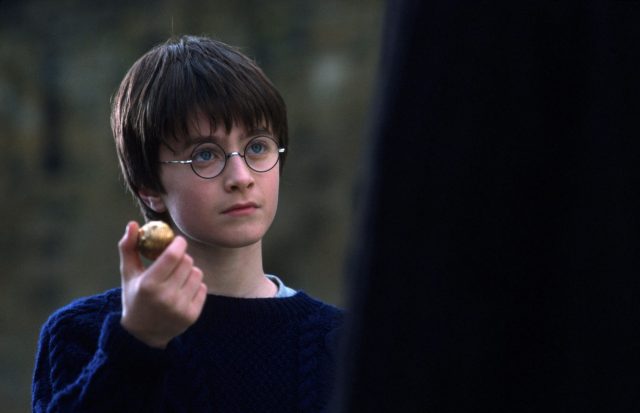 Radcliffe was also allergic to the nickel that made up the first pair of glasses he was supposed to wear for the role, so those were swapped out. Poor guy couldn’t catch a break, costume-wise.

Fans of the Harry Potter books are familiar with J.K. Rowling‘s description of Neville Longbottom as a bumbling boy who is a bit on the larger side. Well, instead of casting a child who matched this description, the film’s producers decided that Matthew Lewis, the actor who played Neville, would wear a fat suit. 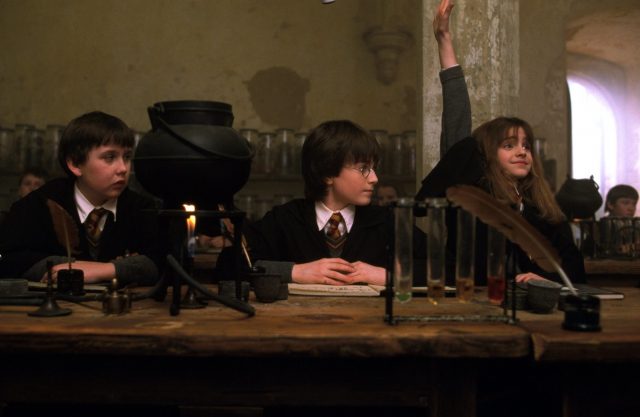 Thankfully for Lewis, they eventually allowed him to ditch the fat suit and portray the character as is. Based on the online reaction, fans were very happy about this choice… Especially after a certain magazine shoot.

While we wish the magic in Harry Potter was real, that sadly isn’t the case. To bring the Wizarding World to life, the film’s producers utilized green screen technology. This meant the actors had to pretend they were actually casting spells.

One search on YouTube will produce many behind-the-scenes videos showing how some of the movies’ scenes were filmed. Just be prepared to laugh at how funny everyone looks pretending to fly on broomsticks.

One of the biggest revelations from the final Harry Potter film is Severus Snape’s love for Lily Potter. However, when filming for the first movie in the series began, the seventh book hadn’t yet been released. That meant J.K. Rowling had to let actor Alan Rickman in on a secret for him to portray his character authentically.

The secret? The meaning behind the word “always.”

“If you remember when I did the first film, she’d only written three or four books, so nobody knew where it was really going except her,” Rickman recalled during an interview with The Hollywood Reporter. “And it was important for her that I know something, but she only gave me tiny pieces of information, which helped me think it was a more ambiguous route.”

Rickman was the only one privy to this, meaning he often got into arguments with directors to ensure Snape was portrayed properly.

Jamie Waylett’s troubles with the law

It didn’t go unnoticed that Malfoy’s sidekick Vincent Crabbe was absent during Harry Potter and the Deathly Hallows: Part 2. This is due to the fact that the actor who portrayed him, Jamie Waylett, had run-ins with the law. The first was for marijuana possession, after bags of the drug were found in his car and a grow-op was discovered in his home. For this, he was sentenced to community service. 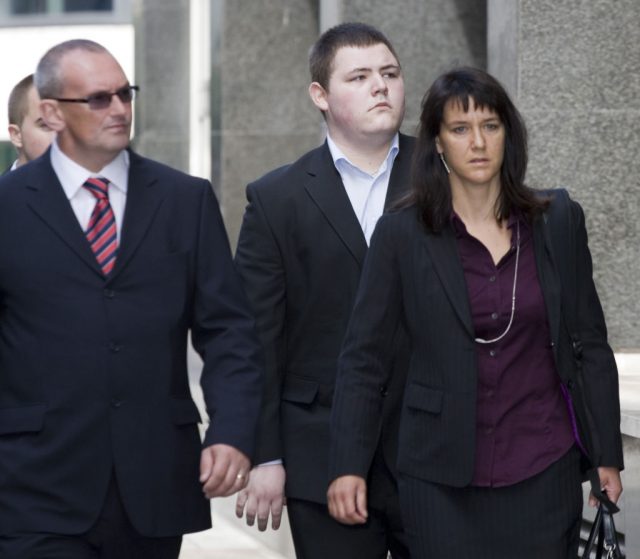 He experienced additional legal troubles two years later, when he was arrested and convicted for his involvement in the destructive 2011 London riots. He was charged with violent disorder, for which he was given a two-year prison sentence, as well as for handling stolen goods, which earned him an additional 12 months. 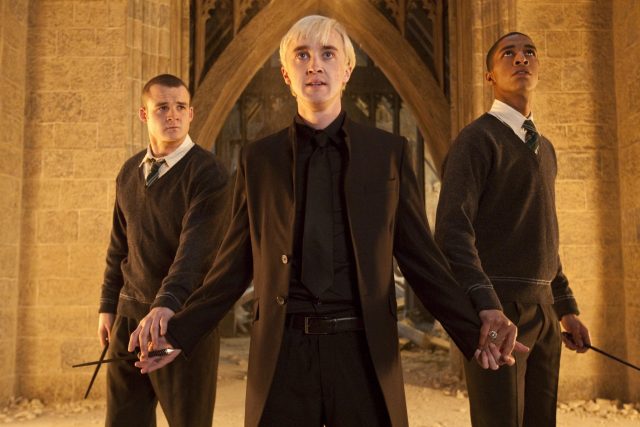 As the Harry Potter films are geared toward young people, the team had to remove him from production. The decision was made to omit Crabbe from the penultimate scene in the Room of Requirement and replace him with fellow Slytherin Blaise Zabini, played by Louise Cordice.

This actor should have definitely been locked up

Speaking of arrests, another Harry Potter actor to be sought by police was Nicholas Read, who played one of the Gringotts goblins. According to news reports, the year the final film was released, Read exposed himself to a teenager while traveling on a train. 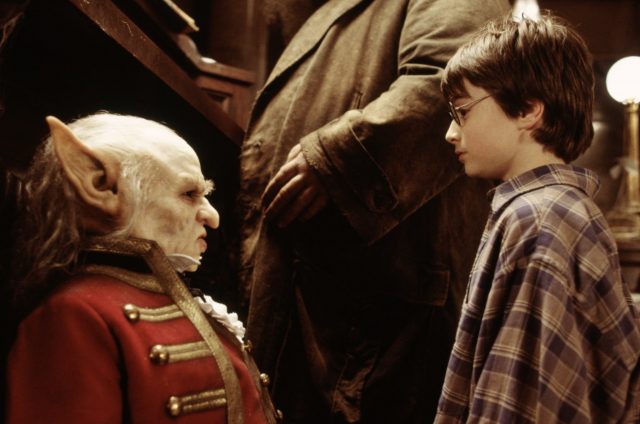 More from us: Why Our Obsession With The Movie â€˜Labyrinthâ€™ Continues, Decades Later

He was arrested and charged with indecent exposure, for which he was eventually convicted. However, he was able to avoid jail time by undergoing a sex offender education course. He later admitted to exposing himself a second time in 2019, this time at an arcade.