How JK Rowling Used Old Words To Create New Ones

There’s hardly anyone in Western culture who hasn’t heard of Harry Potter. The seven books have sold over 500 million copies worldwide. When it was published in July 2005, Harry Potter and the Half-Blood Prince sold nine million copies in the first 24 hours.

The popularity of this series has prompted many real-life tie-in events, from summer holiday broomstick classes being held at Alnwick Castle (one of the filming locations for the first book) to Ohio State University’s course entitled Fantasy Literature: Harry Potter. 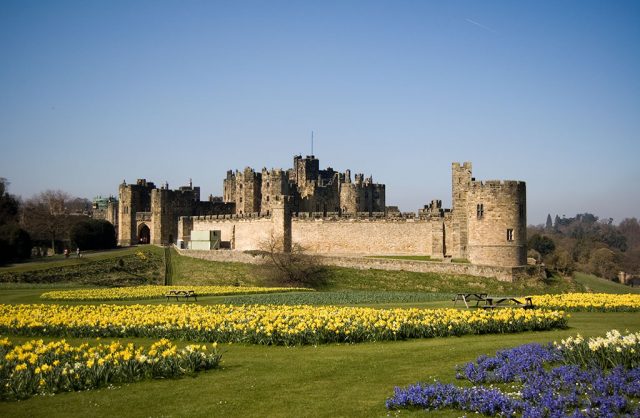 But JK Rowling’s books have also had a subtler effect on our culture. The names and words she used in the books have revived archaic terms that had passed into obscurity, and other words used by the characters have found their way into everyday language.

JK Rowling achieved a BA in French and Classics from the University of Exeter, so it’s no wonder that her books are filled with long-forgotten words. Perhaps the one that stands out the most is Dumbledore, the name of the beloved headmaster of Hogwarts.

While this might seem like a made-up name, the word has its origins in the 18th century. At that time, it was used as another name for a bumblebee. When interviewed in 1999, Rowling is quoted as saying that Dumbledore is fond of music and she often imagined him humming to himself, giving her the inspiration for this unusual name.

“Muggle” is another word that Rowling has lifted from history. In the Potterverse, a “muggle” is a non-magical person. It comes close to sounding like it’s an insult, referring to the word “mug” which has been used to describe a foolish or gullible person.

Indeed, in modern use, people use “muggle” to refer to someone who lacks a particular skill or ability. However, according to the Oxford English Dictionary, it was previously used as a synonym for “sweetheart.”

As well as drawing on old words for inspiration, Rowling has delved into folklore and myths to populate her world with magical creatures. 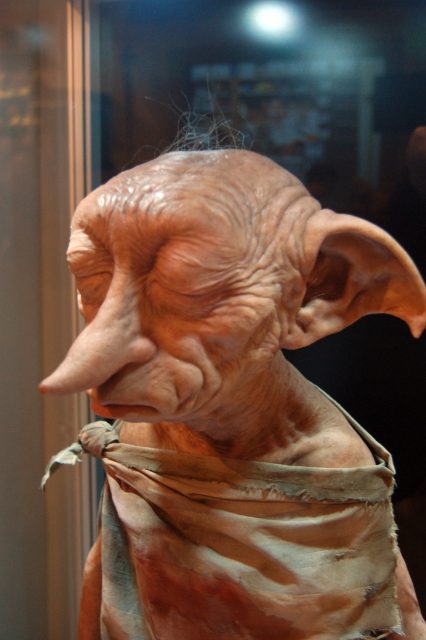 Dobby the house-elf won many hearts both in the books and on screen. Jason Isaacs (who played Lucius Malfoy in the movies) has spoken of how he and Alan Rickman had a bet to see which of them got accosted by more fans during the filming of Harry Potter and the Chamber of Secrets. He revealed that although he won, it was only because children wanted to meet Dobby and thought he’d be with Isaacs since Dobby started out as a house-elf with the Malfoys.

But Rowling has taken the name “Dobby” straight from folklore. There is an entry for Dobby in Katherine Briggs’ An Encyclopedia of Fairies that reads: “A friendly name for a hobgoblin in Yorkshire and Lancashire. He is very like a Brownie, but perhaps more likely to play mischievous pranks.”

A further connection is provided by the fact that brownies are creatures that help round the house at night when no one can see them — much like how the house-elves labor at Hogwarts and in the homes of wizards.

Briggs’ Encyclopedia also has an entry for grindylow (“a Yorkshire water-demon who lurks in deep stagnant pools to drag down children who come too near to the water”), grim (a churchyard guardian that takes the form of a black dog), and boggarts (a mischievous brownie, almost exactly like a poltergeist in his habits”). 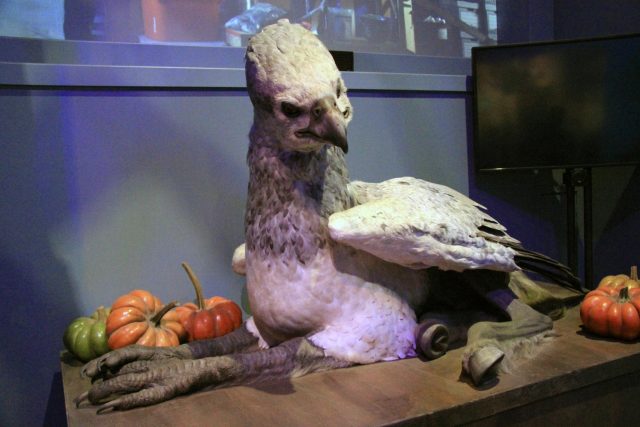 These three creatures appear in the Harry Potter books with rather similar characteristics to their folkloric counterparts.  Other ancient beasts to be given a new lease of life by the Potter books include the basilisk and hippogriffs. These creatures existed in myths and folklore but had fallen into obscurity over time.

While “Potter” is the last name of a family friend from childhood, Rowling has used old words to provide meaningful names for some of her characters.

The name of Remus Lupin (a werewolf) harks back to the founders of Rome who were called Romulus and Remus. Legend has it they were suckled by a she-wolf after their father ordered them to be left on the riverbank to die. This connection is heightened by the fact that “lupus” is Latin for “wolf.” 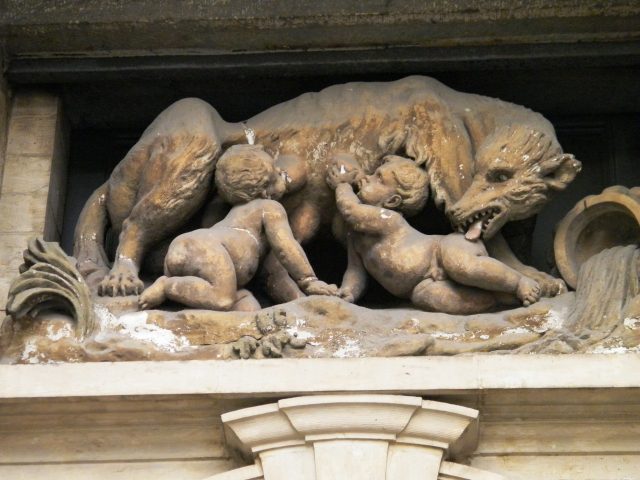 Romulus and Remus being suckled by a she-wolf. (Photo Credit: Sarah Stierch CC BY 4.0)

The great villain of the books is named Voldemort. If considered to be a combination of the French words vol de mort, then the name translates as “flight of death” or “theft of death,” two meanings that have particular significance for a character who brings death to others while simultaneously trying to live forever.

It is notable that when it comes to naming the elite wizarding class, Rowling again borrows from Latin, giving her characters a sense of history.

This is most obvious in the case of the Malfoys. Bellatrix is the female version of bellator, a Latin word meaning “warrior.” In Latin, draco can be translated as dragon or serpent. The name Lucius is taken from the Latin word lux meaning “light,” and was a popular name in Ancient Rome. There have been several powerful politicians and dictators with this name, such as Lucius Annaeus Seneca (often known as Seneca the Younger).

For their surname, Rowling seems to have turned to French for her inspiration since Malfoy can trace its roots to the words mal and foi, meaning “bad faith.”

Using Latin words and phrases gives a sense of history to the Harry Potter books, so it’s no wonder that Rowling uses this ancient language as the basis for the spells wizards have been using for thousands of years.

Some of the spells translate directly from Latin, such as accio which means “I summon” in Latin. Words like expelliarmus are combined words, in this case combining the word expello “I drive out” with arma meaning “arms.” 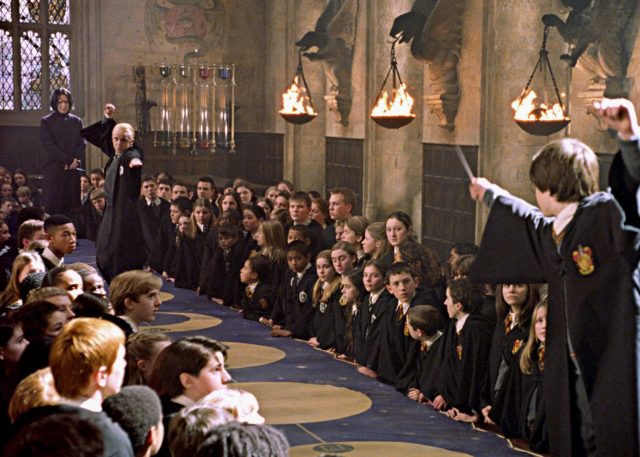 In the real world, Latin still persists in things such as mottos for boarding schools and established institutions. For example, Eton’s motto is floreat etona (“May Eton prosper”), while Durham University opted for the slightly longer fundamenta eius super montibus sanctis (“Her foundations are set upon the holy hills”).

In keeping with this tradition, Hogwarts, the boarding school for witches and wizards, has the motto draco dormiens nunquam titilandus. Showcasing Rowling’s trademark sense of fun, this translates as “never tickle a sleeping dragon.” 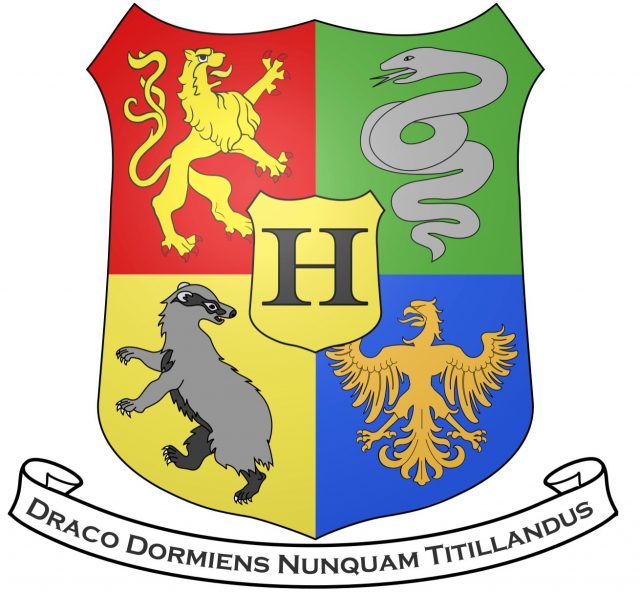 Words from the Potterverse in everyday language

Many reviewers and linguists have commented on how Rowling often combines existing words to make new ones. As well as the example of expelliarmus above, there’s also “animagus.” The word itself is a blending of “animal” and “magus” (a type of wizard), and in the Potterverse, it refers to a wizard with a talent for turning into an animal.

In an article for the Cambridge University Press blog in 2017, Matt Norton (CUP’s resident language researcher) examined which of Rowling’s words have found a new life outside of the books. To do this, he used Cambridge English Corpus, a multi-billion-word collection of contemporary spoken and written English.

The top five words are:

*Quidditch and Muggle were tied in fourth place

Today, people frequently refer to old, dramatic buildings and institutions as “Hogwarts.” Norton uses the example of a person asking how university is going by phrasing their query as: “How are things at Hogwarts?” The name “Voldemort” has also been applied to both a great, evil power or a dictator or warlord.

Norton also made a table of archaic words that had been re-popularized by the series. These included:

Before the publication of the first Harry Potter book in 1997, the word “squib” was actually still in use. Most commonly, something disappointing was described as “a damp squib,” from the idea of a firework not having a very impressive explosion. Studies show that its use was declining in the 20th century, but now its popularity is back on the rise. 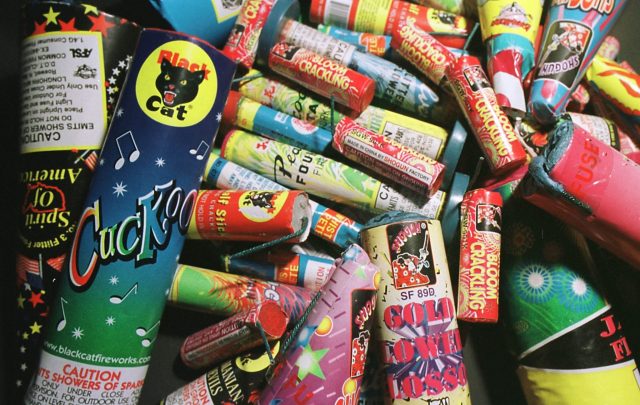 In addition, new words have been created by fans to describe everything relating to the books. There’s Potterverse (the world in the Harry Potter series) and a Potterhead (a fan of Harry Potter).

Whether or not you’re a fan of JK Rowling’s work, there can be no denying the influence the Harry Potter books have had on Western culture and vocabulary.

To quote the American writer Rita Mae Brown: “Language is the road map of a culture. It tells you where its people come from and where they are going.”