Ada Blackjack: The “Female Robinson Crusoe” Who Survived Two Years in the Arctic

In 1921, 23-year-old Inupiak woman Ada Blackjack climbed aboard a small ship heading for a remote arctic island. Leaving behind her sick five-year-old son, Blackjack could never have guessed the horrors that were awaiting her on Wrangel Island.

Doomed from the Start

The Wrangel Island expedition was organized by arctic explorer Vilhjalmur Stefansson, who wanted to claim the remote island for the United Kingdom and Canada – even though it was discovered by the British in 1849. Despite his celebrity status and expertise as an explorer, Stefansson’s poor planning would soon lead to deadly consequences. 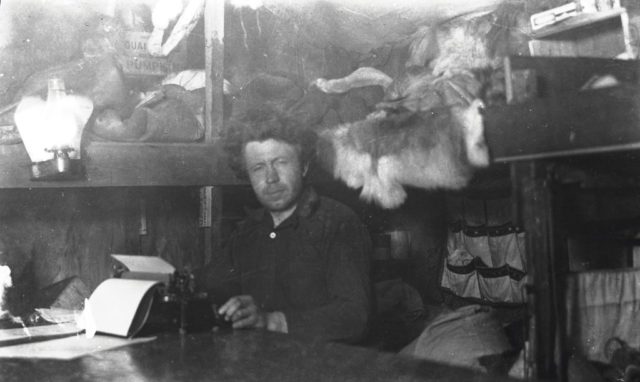 Stefansson gathered a team of four young American and Canadian men for the expedition: Allan Crawford, Lorne Knight, Fred Maurer, and Milton Galle. The crew members were all inexperienced, and since Stefansson had no intention of joining them on the expedition, they were set to fail from the start. Regardless, the team arrived in Solomon, Alaska to gather resources and hire help for the expedition. 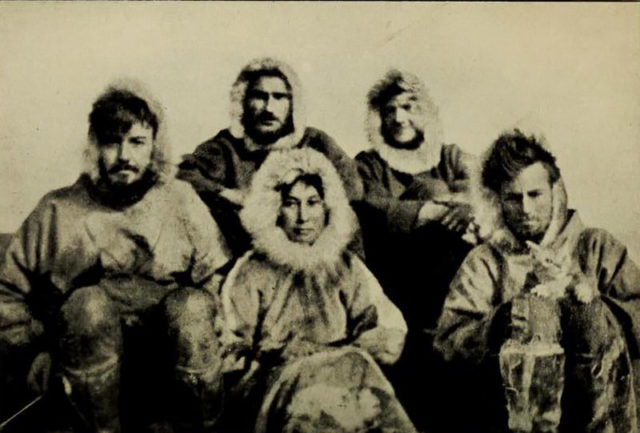 Stranded in the Arctic

On September 9, 1921, the Silver Wave set sail for Wrangel Island with the men, Blackjack, and the ship’s cat Victoria. The first year of the expedition was (surprisingly) a success. The team was able to build a camp, explore the island, hunt for food, and survive comfortably off the provisions Vilhjalmur Stefansson had purchased for them. 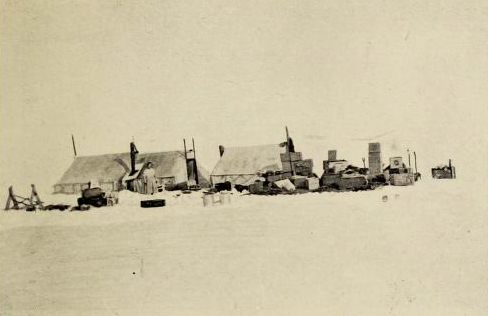 The Wrangel Island camp in late autumn, Ada Blackjack can be seen standing in front of a tent on the left side of the photograph. (Photo Credit: Public Domain, from The Adventure of Wrangel Island)

Trouble set in once winter arrived and the ice began to surround Wrangel Island. The crew was unaware that the ship chartered to bring more provisions for the winter was unable to reach the island through the thick pack ice. When they realized the ship wasn’t coming, the crew faced another year of the expedition and many months of winter. The crew knew that what was left of their supplies would not be enough to survive. 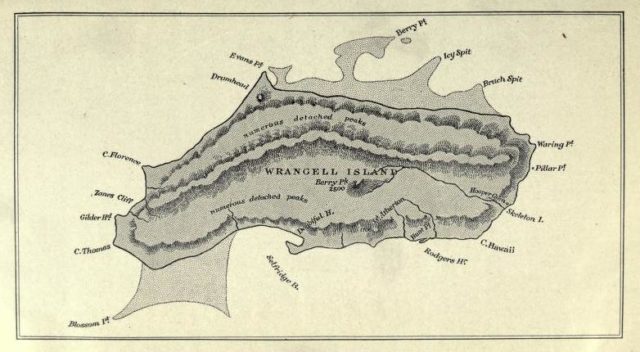 By 1923, the situation on Wrangel Island was destitute. Everyone was starving and one of the explorers Lorne Knight had developed scurvy – a severe vitamin C deficiency that can be fatal if left untreated. Desperate for food, Allan Crawford, Fred Maurer, and Milton Galle left Knight and Blackjack at the camp to cross the ice of Siberia in search of help. They were never seen again.

Blackjack was no stranger to disaster. The widow and mother of three children, two of which had died as infants, had struggled to provide for her remaining son Bennett. She joined the expedition as a last-ditch effort to make enough money to afford Bennett’s medical treatment for tuberculosis. She was terrified that she would lose her only remaining child while she was away on the expedition, and the only thing that drove her to survive was the hope of being reunited with Bennett again.

With Lorne Knight too sick to do anything, it was up to the petite Inupiat woman to find food and firewood for survival.  Though she had never hunted or fished in her life Blackjack was able to teach herself how to shoot a gun, set traps, repair the tents, identify native plants, and fend off polar bears. 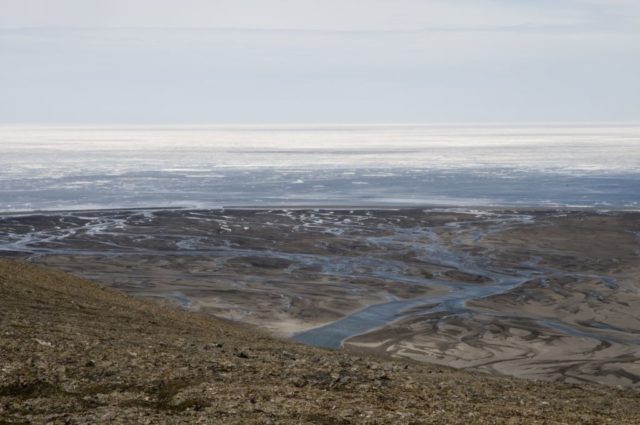 Blackjack took care of Knight for six months. Eventually, the bedridden Knight descended into madness due to the scurvy, often screaming at Blackjack for no reason. Blackjack wrote detailed notes in her diary, especially notes about how poorly Knight treated her:

“When I come in and build the fire Knight started to cruel with me… Saying I wasn’t good to him he never stop and think how much it’s hard for women to take four mans place, to wood work and to hunt for something to eat for him and do waiting to his bed… This is the worst life I ever lived in this world”. 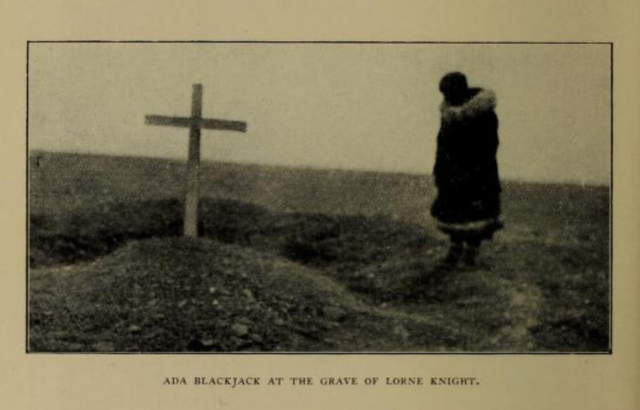 Sometimes, when his madness subsided, Knight allowed Blackjack to read from his bible. The bible was an heirloom that belonged to Knight’s family for several generations. On June 23, 1923, Knight died – leaving Blackjack completely alone. After Knight’s death, Blackjack held onto the bible as a source of hope and comfort.

As the sole survivor of the expedition, Blackjack continued to hunt and fish.  Her only company was the cat that came with her on the ship, Victoria, whom she called Vic.

Finally, after eight months of surviving on her own, help had arrived. On August 20, 1923, a small schooner boat arrived on the shores of Wrangel Island. The crew of the boat, called the Donaldson, noted “Blackjack mastered her environment so far that it seems likely she could have lived there another year, although the isolation would have been a dreadful experience.”

Blackjack and little Vic both returned home to Alaska, where news was quickly spreading of the failed expedition and the “Female Robinson Crusoe” who had survived the unimaginable conditions of the Arctic. Blackjack was a hero, but her only concern was to see her son again. Bennett, now seven years old, was alive and well when he was reunited with his mother. Blackjack used the money she earned during the expedition to seek treatment for Bennett’s tuberculosis, which he recovered from. 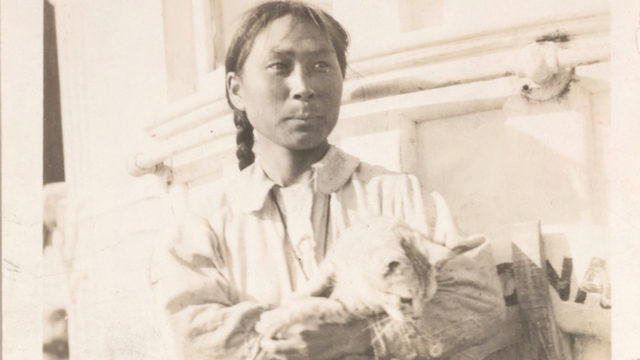 Ada Blackjack holds the expedition cat (and only other survivor) Vic aboard the rescue ship Donaldson. (Photo Credit: Public Domain, from The Adventure of Wrangel Island).

After the expedition, Lorne Knight’s bible also came back from Wrangel Island with Blackjack. Several years after her rescue, Blackjack visited Knight’s family to return his beloved bible. His family was so touched by her story and the care she gave Lorne Knight that they allowed Blackjack to keep the bible, which she used until her death in 1983.

Unfortunately, Ada Blackjack’s story doesn’t have the happiest ending. After her rescue from Wrangel Island and her subsequent fame, she continued to live in poverty while the expedition’s founder Vilhjalmur Stefansson profited off of her story. Stefansson talked to the press, published a book about the expedition, and even publicly denounced Blackjack because of her “failure to save Lorne Knight’s life.” She never saw a cent of the profits Stefansson made off her name. 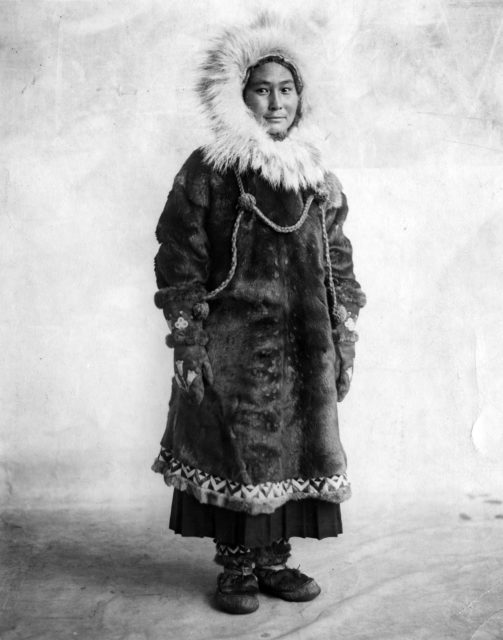 A portrait of Ada Blackjack taken around the time of the Wrangel Island Expedition. (Photo Credit: Rauner Special Collections Library).

Ada Blackjack’s incredible story of strength and survival is truly inspiring. Although her story is remembered by few, Ada Blackjack is still considered to be one of the bravest Arctic explorers in history.