Despite how we typically see them, members of the British Royal Family aren’t always dressed in diamond tiaras and fancy suits – even royals need a break from the prim and proper. How do they dress when they think no one is looking? Lucky for us, there were people around to snap photos of these instances! 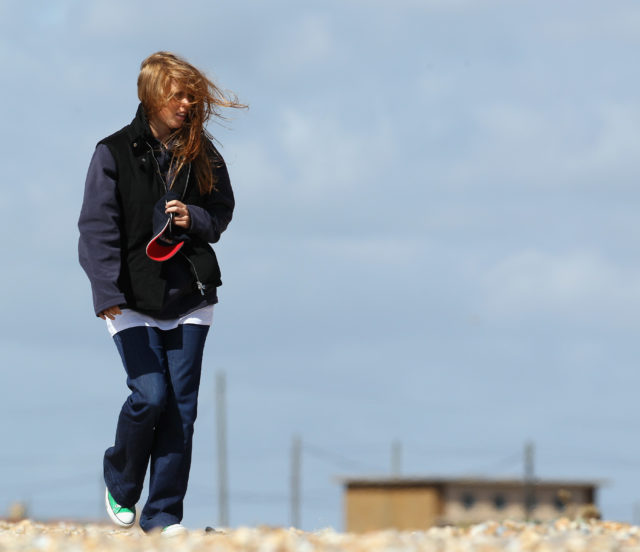 Ninth in line for the throne and the eldest daughter of the Duke of York, Princess Beatrice knows how to keep things casual. In August 2010, she bundled up for a walk along the English Channel. Jeans, Chuck Taylors and an oversized jacket kept her warm against the cool wind coming off the channel – she even came equipped with a baseball cap to tame her hair! 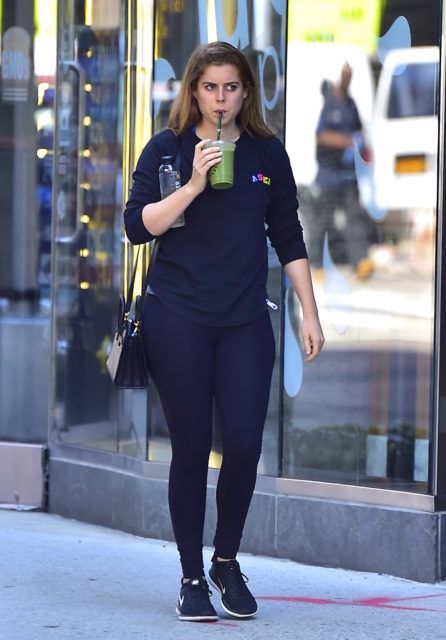 After crossing the Atlantic to visit New York City, an almost unrecognizable Beatrice went with an “athleisure” look, wearing leggings, running shoes and a long-sleeved tee while enjoying a smoothie in SoHo in 2017. 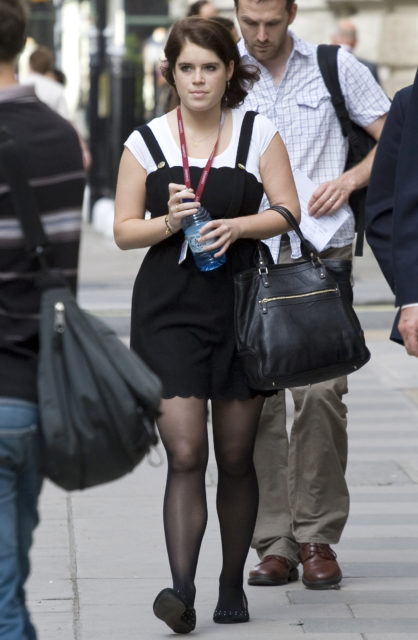 Little sister to Beatrice, Princess Eugenie sits even further down at 11th in line for the throne. While she was gaining work experience in 2010, Eugenie was enrolled at Christie’s Summer Auction House in London, where she kept things semi-professional with a black minidress, black tights and some studded flats. 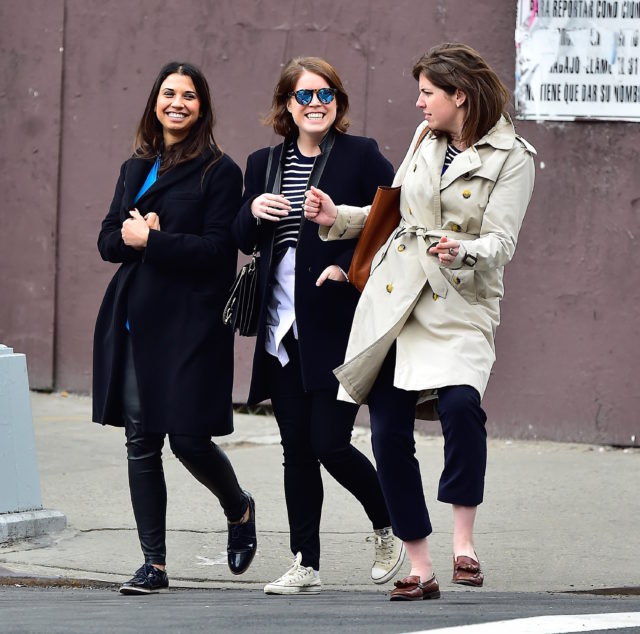 Turns out this pair of sisters love New York City! Eugenie was spotted wearing skinny jeans, Chucks (just like her older sister) and a pair of reflective blue shades while out with friends in SoHo in 2015. 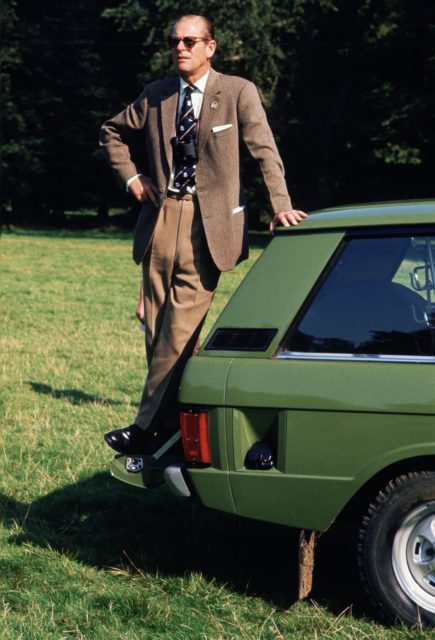 Prince Philip standing on the back of his Range Rover while at the Royal Windsor Horse Show, 1974. (Photo Credit: Tim Graham Photo Library / Getty Images)

Prince Philip, the husband and distant cousin of the late Queen Elizabeth II, was a pretty stylish guy back in the day. Sporting a casual suit and printed tie, he was dressed to impress at the Royal Windsor Horse Show in 1974. Equipped with binoculars and stylish sunglasses, he was ready for an eventful day in the sun.

Oh, and he just casually stood on his Range Rover to get a better view. 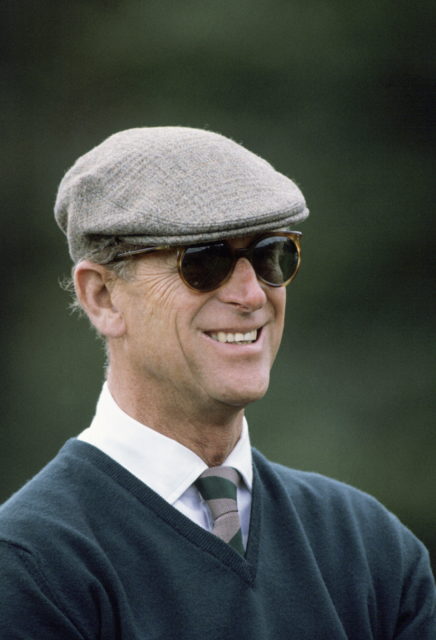 Philip would be spotted again wearing sunglasses and a cap at Windsor Great Park during a horse show in the 1990s. What can we say, the man knew how to accessorize! 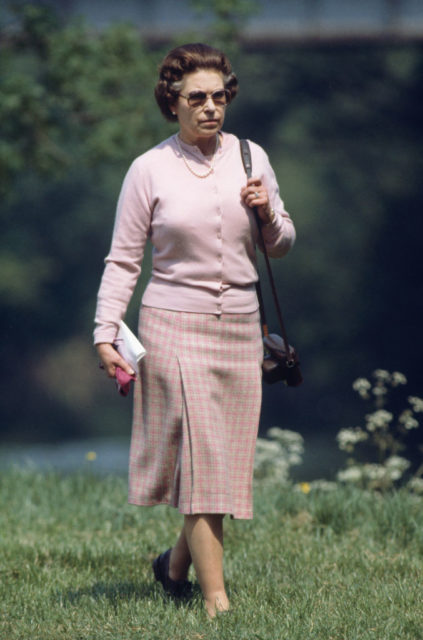 Queen Elizabeth II may not always have been spotted in her crown, but she certainly knew how to roll her royal fashion into her off-duty looks. She looked pretty in pink walking the grounds of Windsor Castle in 1982, with a petal pink cardigan, pink plaid skirt and pearl necklace. 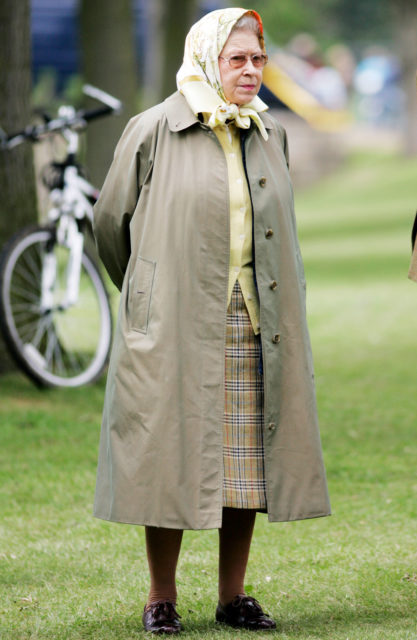 Like her husband, Queen Elizabeth II was a dedicated audience member of the Royal Windsor Horse Show. Keeping her curls protected from the wind, she elegantly wrapped a printed satin scarf around her hair. A light color palette with a yellow blouse, tartan plaid skirt and beige trench coat suited the Queen perfectly for the spring event in May 2007. 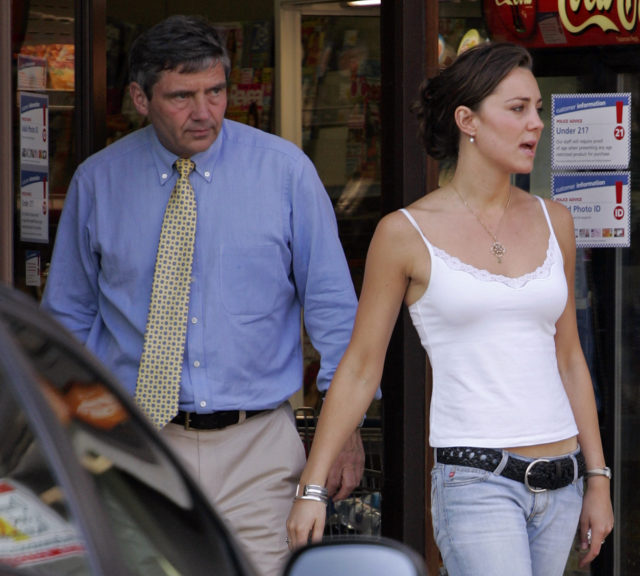 Before her days as the Duchess of Cambridge and then the Princess of Wales, Kate Middleton attended the University of St. Andrews, where she met her future husband, Prince William. Like the poster child of fashion trends in 2005, she was spotted in a lace-trimmed camisole, low-rise jeans and a big black belt before her graduation with an undergraduate MA in Art History. 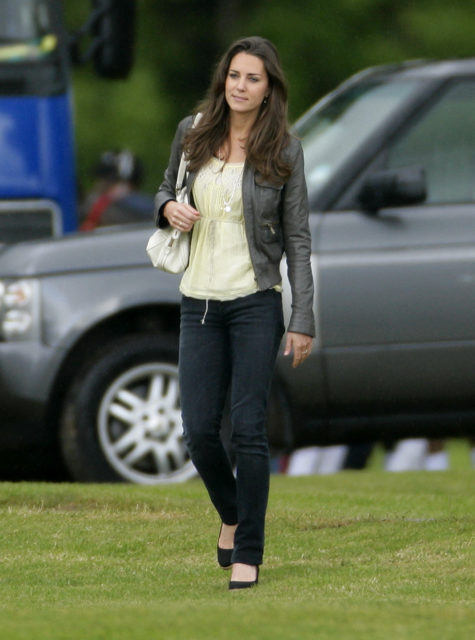 A year before their engagement, Kate was seen supporting and cheering on William as he played in the Dorchester Trophy polo match in 2009. Sporting a grey leather jacket and yellow blouse, she looked stylish and comfortable. She paired the outfit with some smartly chosen wedges, perfect for walking on the grassy pitch.

Prince William tied the knot with Kate Middleton in 2011, but just because he’s married doesn’t mean he can’t still have fun! In the summer of 2013, William was spotted leaving Tonteria night club after a night out with his brother, Prince Harry. A black sweater, jeans and sneakers may be inconspicuous, but we all know who’s hiding under that orange baseball cap. 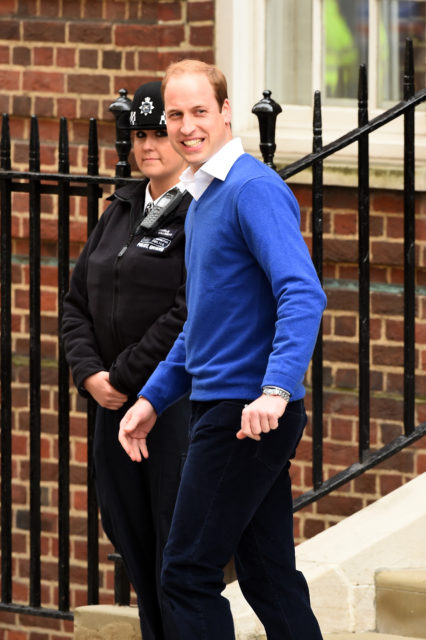 After a stressful morning welcoming his daughter into the world, Prince William was all smiles leaving the Lindo Wing of St. Mary’s Hospital in May 2015. For such a momentous day, William kept things simple with a sweater, slacks and a white collared shirt. Royal blue suits the royal Prince. 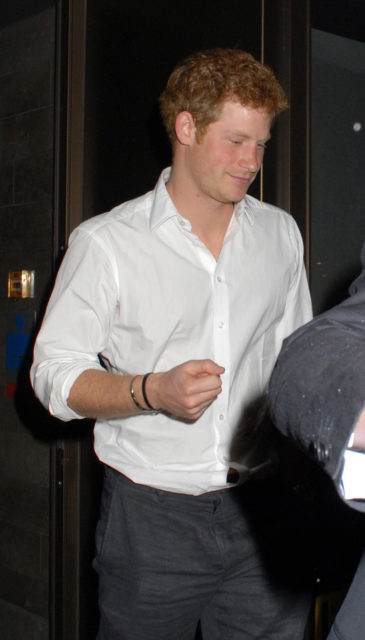 Before he met his wife, Prince Harry enjoyed the nightlife. Ditching his army gear every once in a while, restaurants and nightclubs became a favorite of the young bachelor. For this, Harry kept things simple. On this night in 2012, Harry wore a light button-down shirt and grey pants, paired with some bracelets, to a restaurant in London. 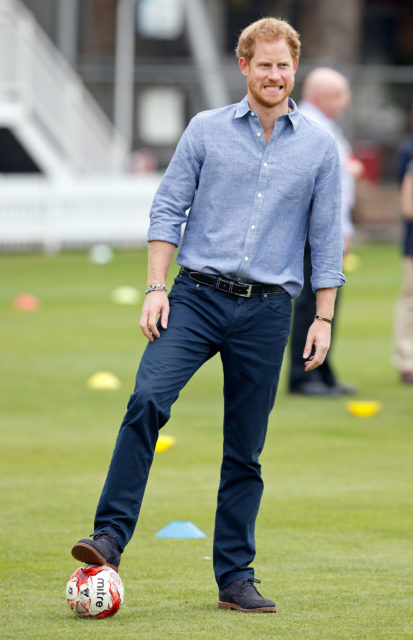 While attending the expansion of the Coach Core apprenticeship program in 2016, Harry chose to wear a subtle blue linen-blend shirt and blue cargo pants. He is known to be a big sports fan and has played polo, rugby, cricket and soccer, so it’s no surprise he couldn’t help but play with a ball while there. 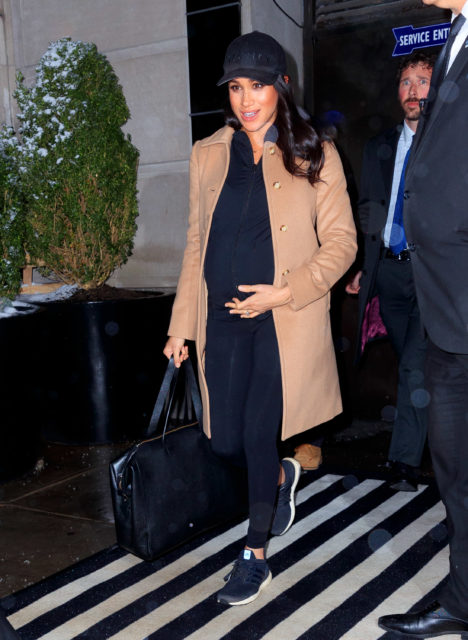 Meghan Markle, Duchess of Sussex, was pretty used to the paparazzi even before her relationship with Prince Harry. As an actress, she was certainly in the limelight. Staying semi-incognito in New York City in 2019, a then-pregnant Meghan dressed in all black, including her hat, bag and running shoes.

She would have gotten away with, too, it if it weren’t for the dead giveaway: her camel-colored coat. 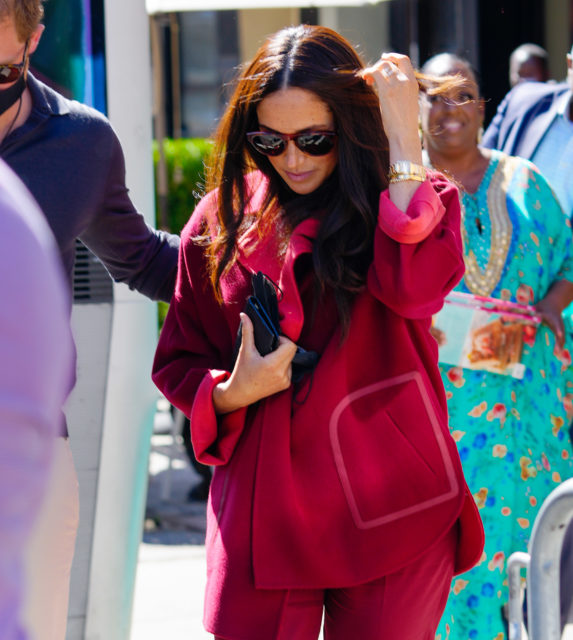 Bold and beautiful. That is the best way to describe Meghan’s pink-colored block outfit as she visited a restaurant in Harlem in 2021. Cuffed sleeves and a shiny gold watch round off this outfit’s bright twist on fancy but comfortable. 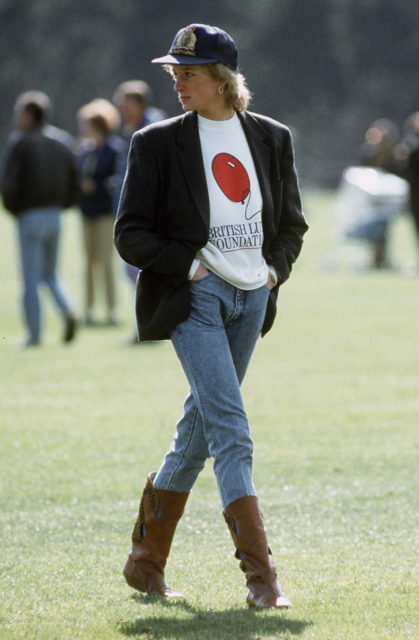 The “people’s princess” herself, Princess Diana is considered an off-duty fashion icon. Keeping things comfortable at the Guards Polo Club in 1988, Diana wore her British Lung Foundation crewneck under a black blazer, paired with jeans and fancy boots. A look that is both unconventional and adorable. 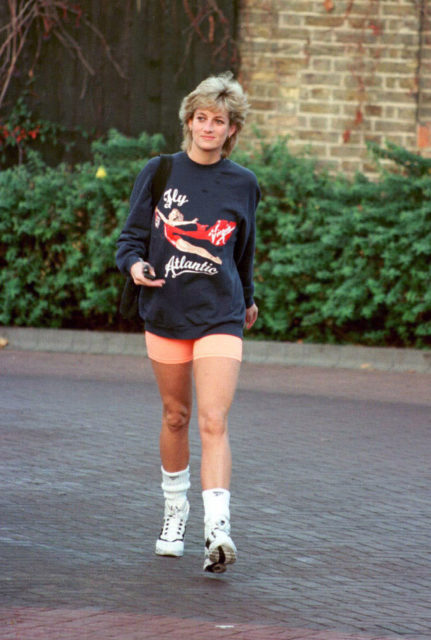 Not afraid to show some leg, Diana wore coral bike shorts, a graphic sweatshirt and tall white socks when leaving the Chelsea Harbour Club in November 1995. With this off-duty look, she was giving Sporty Spice a run for her money. 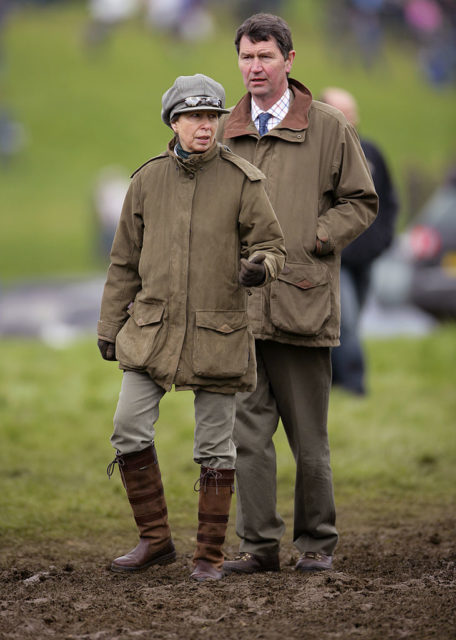 Princess Anne and husband Vice-Admiral Tim Laurence stand in a muddy field as they attend the Badminton Horse Trials, in which Princess Anne’s daughter Zara Phillips is competing on May 2, 2010 in Badminton, Gloucestershire. (Photo Credit: Indigo/Getty Images)

Anne, Princess Royal is the sister of King Charles III. Anne has made a name for herself through her athleticism, being an accomplished equestrian and the first member of the royal to compete in the Olympic Games. In this photo, she’s sporting a smart but fashionable brown coat and tall riding boots. She and her husband, Vice-Admiral Timothy Laurence, are practically matching. 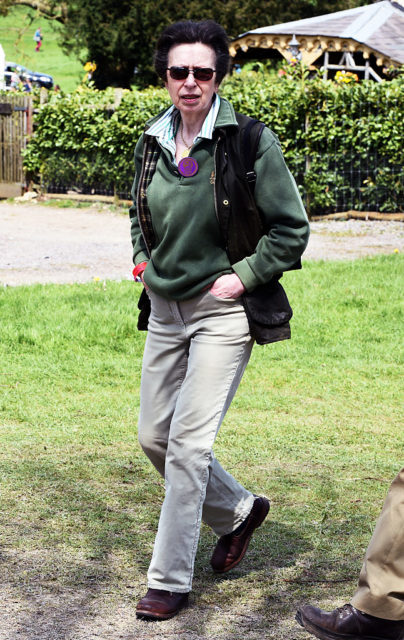 It’s always smart to dress for the weather when spending as much time outdoors as Princess Anne does. Here she is attending a horse show in 2016 wearing a practical black vest over a layered sweater and shirt. Casual but flattering pants and leather shoes complete the look.

« We Can’t Believe These Celebrities Are the Same Age
Ada Blackjack: The “Female Robinson Crusoe” Who Survived Two Years in the Arctic »