The British royal family is known as “The Firm” because it’s as much a professional business as it is a family unit. Before she got married, the Duchess of Cambridge was given “princess lessons” by the Queen, as revealed in Kate Middleton: Working Class to Windsor, an Amazon Prime documentary.

Many of the rules Kate has to follow are to do with clothing and deportment, but there are other, more bizarre ones as well, such as what kind of gift she can give the Queen at Christmas or how she can never play Monopoly with any of the family.

Keep your chin level with stairs when walking downstairs 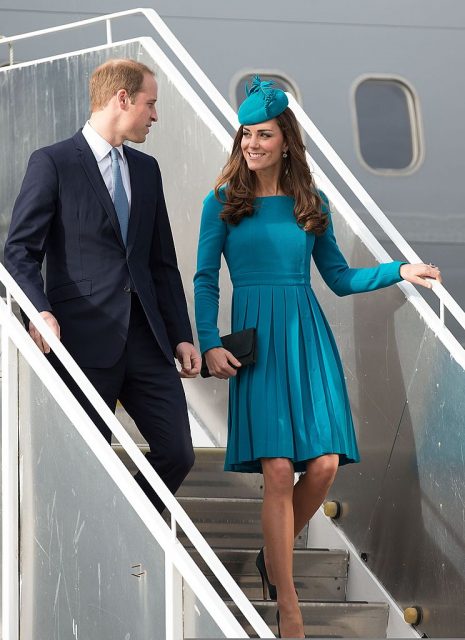 Britain’s Prince William with Catherine the Duchess of Cambridge walk from the plane after arriving in Dunedin airport in Dunedin on April 13, 2014.  (Photo Credit: Marty Melville/AFP via Getty Images)

Yes, there really are rules about how you walk downstairs or get off a plane.

The rule is that a female member of the royal family must keep her chin level with the stairs. This is because looking down is deemed disrespectful, while looking to can give you a haughty appearance.

Don’t sit with your legs crossed at the knee 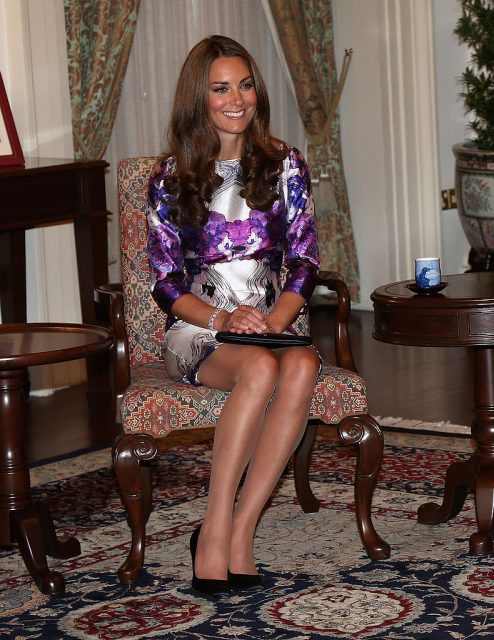 Instead, keep your legs together and straight, although crossing them at the ankle is fine. In fact, the way Kate sits has been dubbed “the Duchess slant.” It’s a pose that maintains her dignity while making her legs look long and elegant.

Skirts are knee-length, and hosiery must be worn 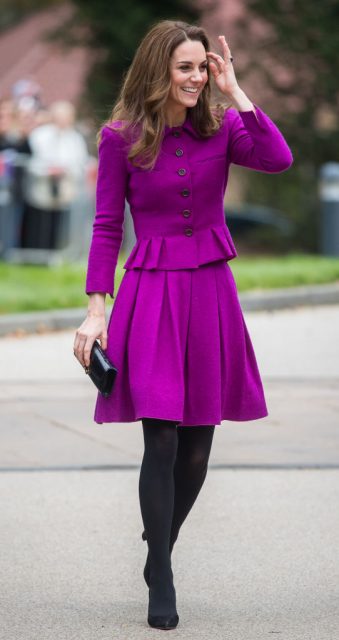 There are no mini-skirts allowed when you’re a princess, and the Queen does not like bare legs to be on show either.

How and when you must curtsy 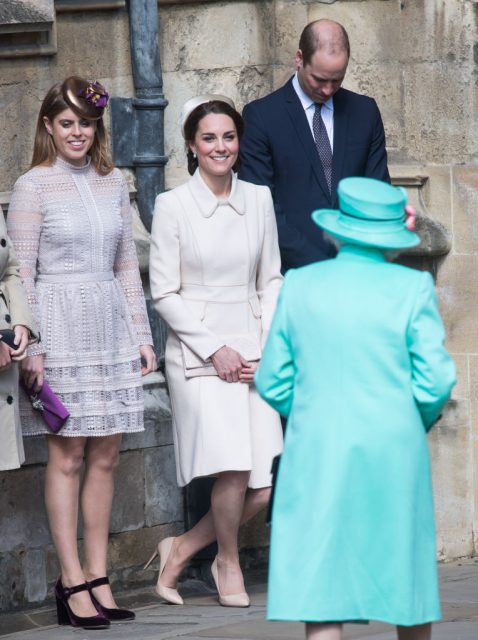 Generally, it is sufficient to put one leg behind the other, bend your knee, and bow your head slightly. Kate must curtsy to the Queen when she meets her for the first time that day.

She also has to bow to everyone who is more senior than her, and her seniority depends on whether her husband is with her. If he isn’t with her, then she has to bow to those princesses born into the royal family, ie. Princesses Anne, Eugenie, and Beatrice.

Whether she curtsies to Camilla, the Duchess of Cornwall, depends on whether Prince Charles is present or not. For the Trooping of the Colour celebrations, Kate and Camilla often ride together as two princesses of similar rank. 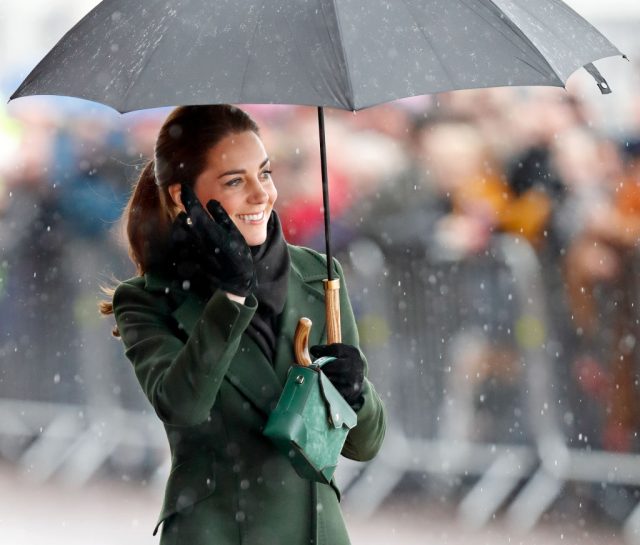 Everyone knows that the Queen uses her bag to communicate with her staff. Princess Diana was often photographing clutching her purse to her chest as she excited vehicles to avoid baring cleavage.

Kate has been known to hold hers in front of her on occasions when it would be awkward to shake hands with the person she’s greeting.

Gloves have their own etiquette 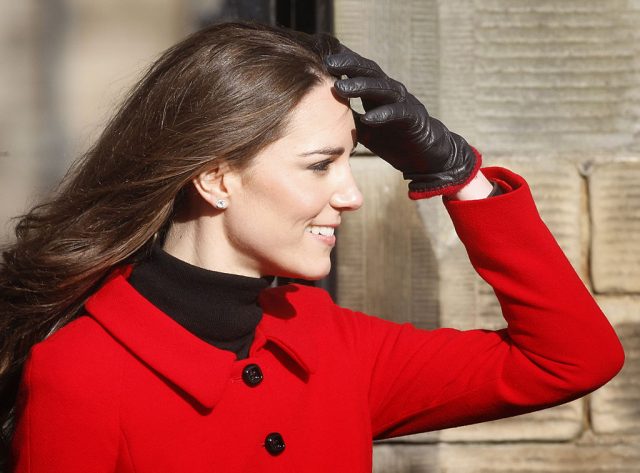 Kate Middleton shields her eyes during a visit to the University of St Andrews in Scotland on February 25, 2011 (Photo Credit: should read DANNY LAWSON/AFP via Getty Images)

Wearing gloves has been seen as hygienic, what with all those hands a princess has to shake. But there are specific rules governing these accessories.

According to Bustle.com: “Wear them en route to the event, when shaking someone’s hand, standing in a receiving line, or dancing. You have to take them off when you’re eating (even if it’s just a quick canapÃ© or nosh), and they’re forbidden at the dinner table.”

Drink your tea properly and fold your napkin 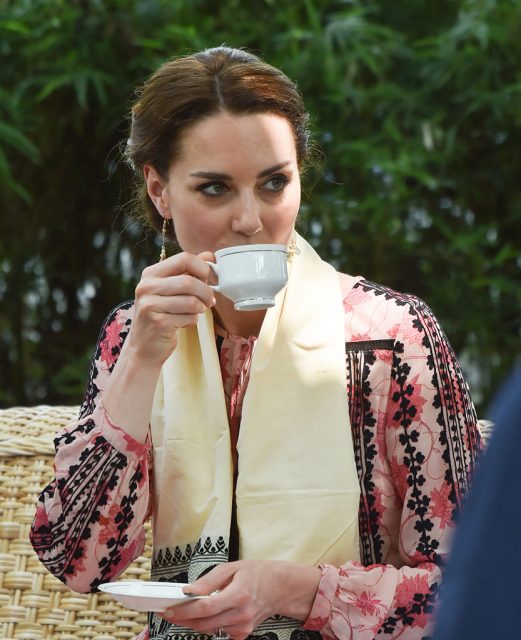 Catherine, Duchess of Cambridge drinks a cup of tea as she visits the Centre for Wildlife Rehabilitation and Conservation at Kaziranga National Park on April 13, 2016 in Guwahati, India. (Photo Credit: Samir Hussein/Pool/WireImage)

When drinking tea, a royal must use her thumb and index finger to hold the cup, and holding your pinkie out is a definite no-no. A princess should always drink from the same spot to avoid multiple lipstick stains.

Avoiding unsightly stains is another reason why royals always fold their napkins after eating. 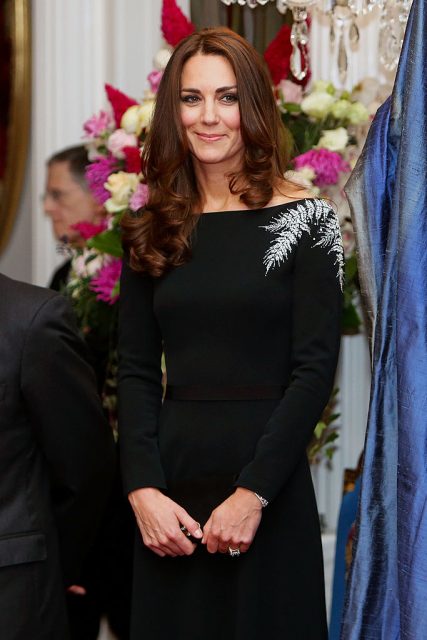 If you’re going abroad, always pack a black outfit in case a member dies while you’re away.

Hello! magazine reports that when George VI died in 1952, the Queen was in Africa and didn’t have a suitable black outfit, so no photo of her was taken until she had something black to wear. 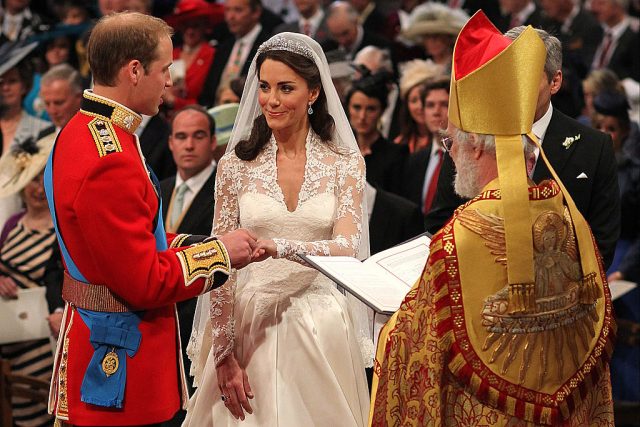 According to Forbes, it’s the event and not the status of the person wearing the tiara that is important. Hats are to be worn before 6 pm, after which tiaras are worn inside ”“ but only if you’re married.

A royal bride always wears a tiara on her wedding day. Tradition dictates that, after that, a princess wear the jewels of her husband’s family to show that she’s part of it now, but that isn’t a rule that is rarely followed these days.

Don’t play Monopoly with The Firm 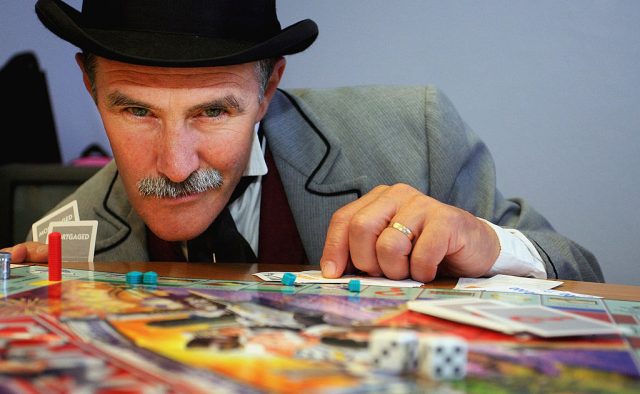 It gets too vicious, apparently, as was revealed by the Duke of York when Leeds Building Society gave him the game as a gift in 2008. He told them: “We’re not allowed to play Monopoly at home. It gets too vicious.” 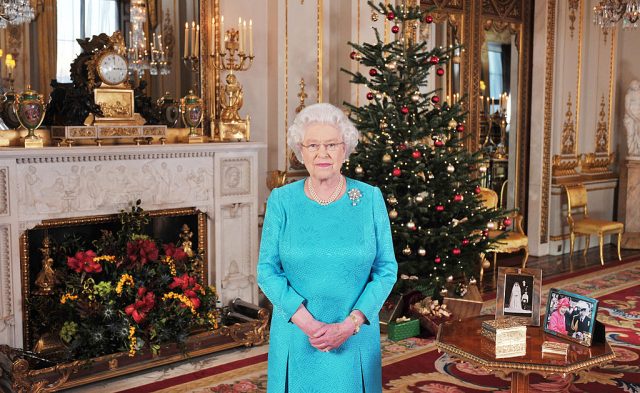 Queen Elizabeth II is pictured prior to the recording of her Christmas Day broadcast to the Commonwealth, in the White Drawing Room at Buckingham Palace on December 10, 2009 in London, England. (Photo Credit: John Stillwell/WPA Pool/Getty Images)

What do you get the Queen who has everything? The tradition in The Firm is that only personal or novelty items are exchanged between the family at Christmas.

For her first Christmas to the Queen, Kate made her some homemade chutney from her grandmother’s recipe. That was likely a more tasteful choice than when her husband, Prince William, gave the Queen a pair of slippers with her own face emblazoned on it.

You can’t sit next to William for Christmas dinner 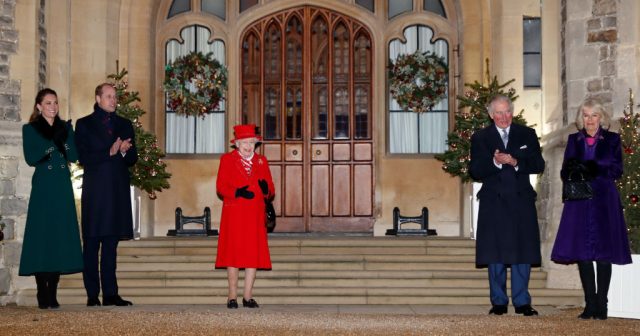 She might be married to William, but that doesn’t automatically mean that she gets a seat beside her husband at Christmas.

In the 2018 Channel 5 documentary Sandringham: Christmas with the Queen, ex-butler Grant Harrold stated that husbands and wives might be split up due to seniority. For example, the Queen would sit at one end, with the next most senior guest on her right, probably Prince Charles. The Duke of Edinburgh would have been at the other end and the Duchess of Cornwall would’ve been next to him.

It was very common for husbands and wives to be split up, although Harrold hints that it wasn’t just for seniority, but also so that you got someone new to talk to.

When the Queen’s finished, you’re finished 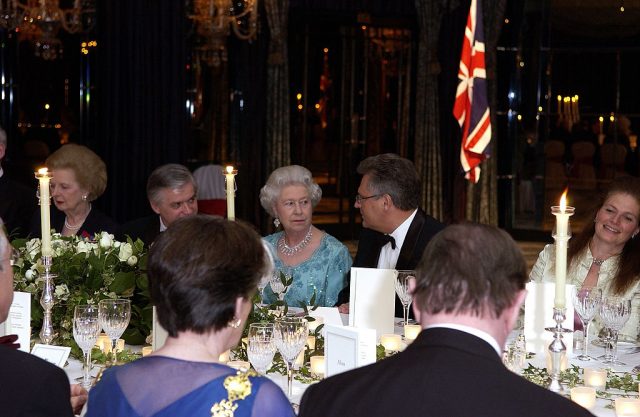 Queen Elizabeth II At The Top Table With The President Of Poland, Aleksander Kwasniewski At The Banquet At The Dorchester Hotel (Photo Credit: Tim Graham Photo Library via Getty Images)

More from us: Thanks To Princess Diana, Prince William Will Be The First Descendant Of Charles II To Sit On The Throne

However lovely your meal is, everyone puts down their knife and fork when the Queen does. If you want second helpings, you’d better eat quickly…