How Does ‘The Crown’ Stack Up To The Real-Life Royal Family?

The Crown is known for taking historical liberties and perhaps stretching the truth. After all, it is difficult to know what really happens with members of the royal family behind closed doors. Here, let’s take a peek at how The Crown compares to the real-life British royal family. 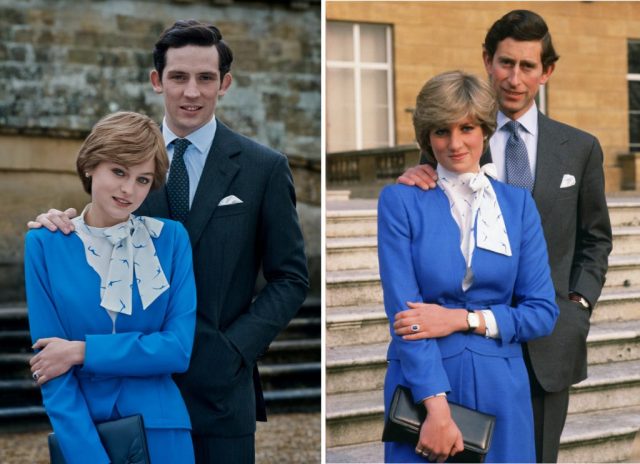 In 1981, after six months of dating, Lady Diana Spencer and Prince Charles announced their engagement to the world. The couple took their engagement photos outside of Buckingham Palace and Lady Diana matched her outfit to her stunning sapphire engagement ring. The Crown was able to perfectly recreate the royal couples’ look, right down to the facial expressions and conversations that were being had. After all, who could forget Prince Charles responding “whatever ‘in love’ means” when a reporter asked if the couple was in love. 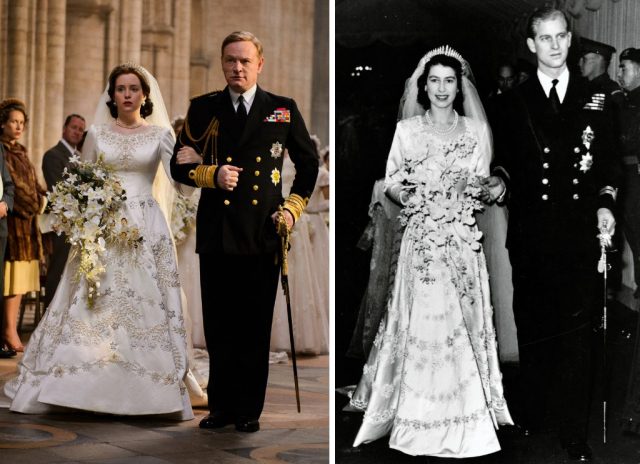 Before Queen Elizabeth was crowned queen, she married Prince Philip in an elaborate royal wedding in 1947. At their wedding, Queen Elizabeth wore a wedding dress designed by Norman Hartnell, made of Chinese silk with a sweetheart neckline and long, fitted sleeves. Interestingly enough, because Elizabeth and Philip were married in 1947 when clothing was still being rationed in England, Elizabeth purchased the material for her wedding dress with ration coupons.

The Crown recreated a stunning replica of the Queen’s wedding dress. The main difference was that Queen Elizabeth’s dress included over 10,000 crystals and pearls and The Crown’s costume budget did not allow for those precious gemstones to be added into the dress actress Claire Foy wore. 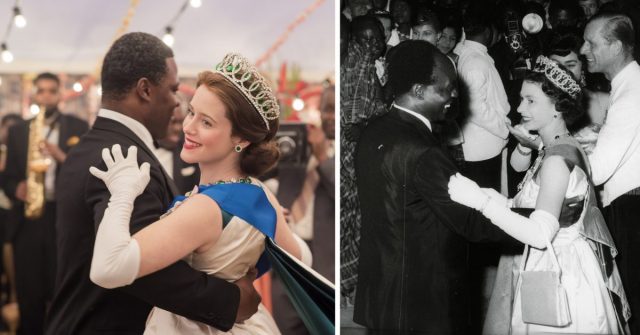 Queen Elizabeth II’s 1961 trip to Ghana was not without controversy. Cold War tensions were high, and the Ghanan president Kwame Nkrumah seemed to be well on his way to becoming a full-blown dictator. Members of parliament were reluctant to allow Elizabeth to go on this trip, but Elizabeth insisted on going. She had already had to push a trip to Ghana in 1959 and felt that another trip would cause President Nkrumah to cozy up more to the Soviet Union.

Elizabeth’s trip to Ghana was a success, from start to finish. In the capital city, Accra, Queen Elizabeth was photographed happily dancing with President Kwame Nkrumah. Although this dance was well received around the world, it perhaps wasn’t as crucial as The Crown made it out to be. Furthermore, The Crown got a lot of facts wrong about post-colonial Africa. 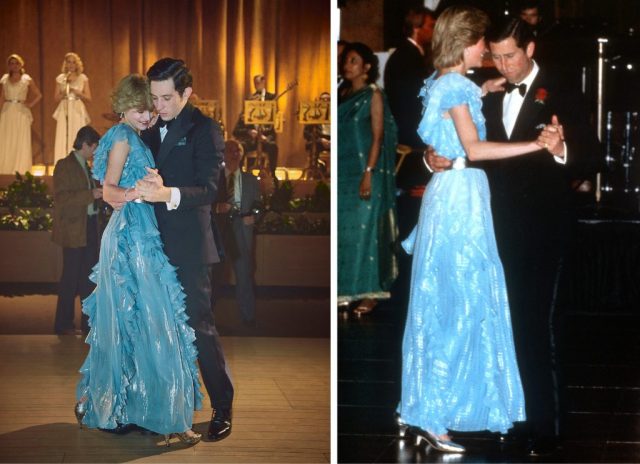 Prince Charles and Princess Diana’s 1983 official tour to Australia and New Zealand was a major milestone for the young couple. On March 28, 1983, the couple attended a charity ball in Sydney, Australia. Photos from this event showed the public that the couple seemed to be very much in love.

The Crown depicted this dance as a happy affair for the couple, but the trip was a tumultuous event. The Crown shows Charles and Diana as awkward in front of the Australian press and miserable in private. Although we don’t know what was happening behind closed doors, it is highly possible that the couple were upset with each other in private.

5. Queen Elizabeth II salutes during the Trooping of the Colour Ceremony 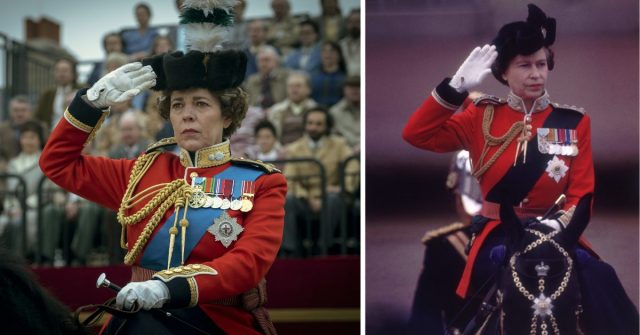 The Trooping of the Colour ceremony is the official birthday celebration for the British Sovereign. The Queenusually attended this ceremony on horseback but in her later years she switched to riding in a carriage.

Olivia Colman, who played Queen Elizabeth II in the third and fourth season of The Crown was able to accurately portray Queen Elizabeth for her 55th birthday. However, military historians since have come to criticize Colman’s “sloppy” salute shown in the Trooping of the Colour ceremony.

6. The investiture of Prince Charles 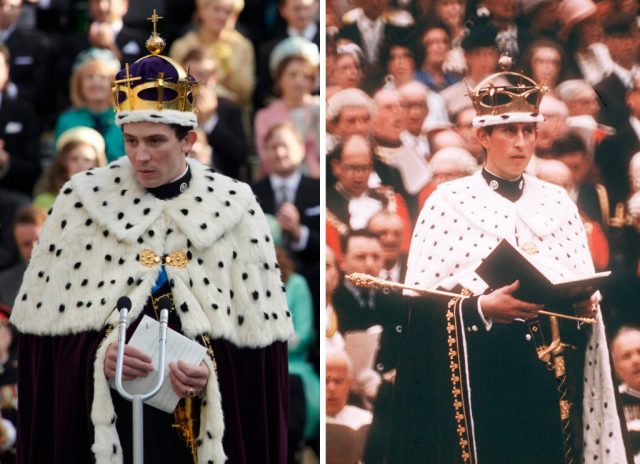 In The Crown, Prime Minister Harold Wilson suggests to Queen Elizabeth that Charles should leave Cambridge and spend a semester at Aberystwyth University to learn more about the history and culture of Wales. Here, Charles learns Welsh from Edward Millward, a Welsh nationalist who opposed the Royal Family’s power in Wales. Prince Charles did, in fact, spend a semester at the University College of Wales at Aberystwyth in 1969, and was taught by a man named Edward Millward to speak Welsh. 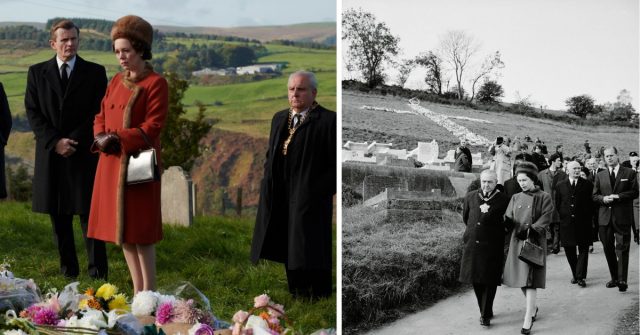 On October 21, 1966, a coal waste tip collapsed and slid into a school in Aberfan, Wales. This accident took the lives of 144 individuals, many of them were young children from the school. Queen Elizabeth II interestingly chose not to visit the town until eight days after the accident happened.

The Crown recreated the events of the disaster, including Queen Elizabeth’s delayed response. However, The Crown portrays Queen Elizabeth II as fairly emotionally detached from the situation, apparently faking tears when meeting residents who lost family members. It has been suggested that Queen Elizabeth in reality was very emotional about this event, and according to Town & Country magazine, her failure to respond quickly to the crisis is one of her biggest regrets.

8. Margaret Thatcher on her first day of work 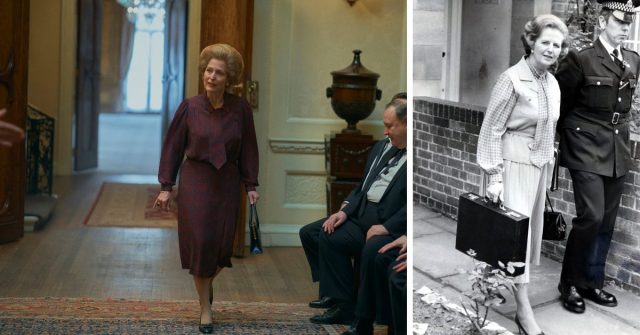 On May 4, 1979, Margaret Thatcher made history by becoming the first British prime minister. One month later, she had her official first day of work. The Crown recreated this event, down to Margaret Thatcher’s outfit, including her iconic scarf and briefcase she carried. 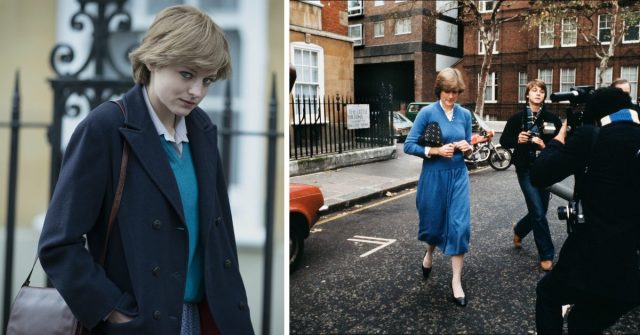 It is common for members of the Royal family to be bombarded by media outlets when they are out in public. Diana faced the paparazzi for her entire adult life, but was especially thrown into the spotlight when she started dating Prince Charles.

More from us: Charles And Diana: A Look Back At The Wedding Of The Century

The Crown did a great job depicting the hounding that Diana faced during her time with the royal family, especially in the early 1980s.